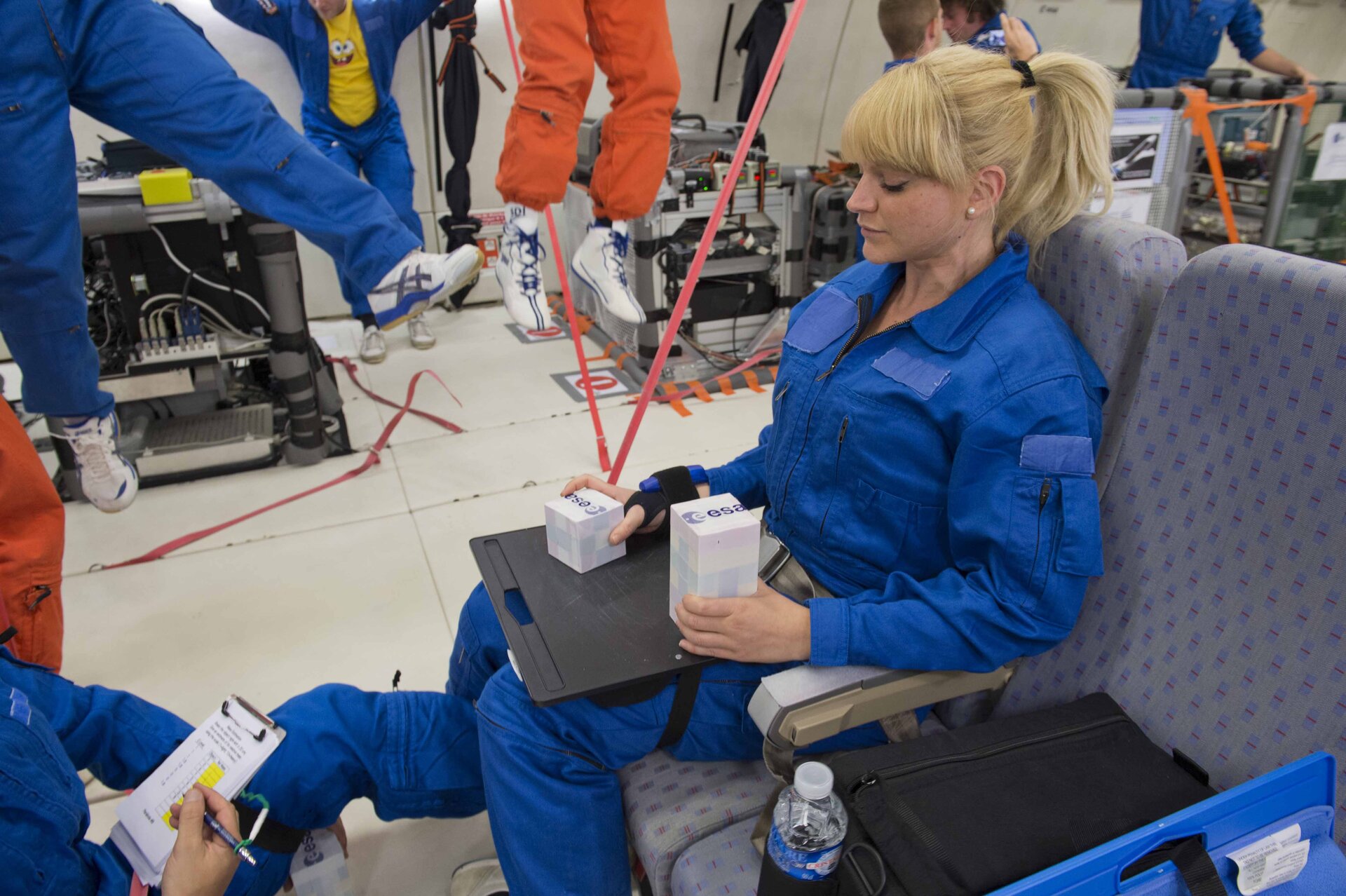 Laura André-Boyet is a 31-year-old French Astronaut Instructor and Simulation Director at the European Astronaut Centre in Cologne. Employed by Lufthansa Flight Training, the airline's pilot school, she is currently seconded at EAC for ESA.

Can you tell us about your professional background?

My specialties are Physiology, Engineering and Business. I studied Medicine and Physiology at the University of Grenoble, I have a double engineering degree from the Polytechnic Schools of Montreal and Grenoble and an MBA from the International Space University.

I did a Research internship in Tsukuba, Japan, an exchange year in Canada and my final study was conducted at CNES (CADMOS) in Toulouse. At the end of my internship I was selected to present my work at the International Astronautical Congress in 2007 in Hyderabad, India, where I won the first prize. After that, Institute for Space Medicine and Physiology (the MEDES) offered me a position as Manager of Space Experiments and Operations Leader at CNES.

In January 2010, I contributed to the Basic Training of new ESA astronauts as an instructor in physiology and anatomy, and a few months later I was hired as an Astronaut Instructor at EAC by Lufthansa Flight Training.

Since then, I have been dedicated to space both professionally and personally; participating as a subject and co-investigator in Space Physiology experiments on parabolic flights and human centrifuges. I also lead and participate in side projects in extreme environments physiology research.

I am currently investing more time and energy in Suborbital Spaceflight participants training projects, which was the topic of my MBA thesis. As for my future, I wish to continue my involvement in Human Spaceflight and Exploration programmes, hopefully growing within ESA.

How many languages do you speak, and which do you use on a daily basis?

I speak French, English and German. The usual language at EAC is English and the centre is located on the DLR site where the official language is German. As I often meet with French colleagues there, I use all three languages on a daily basis. I learnt some Japanese during my studies in Tsukuba, and I would also like to learn Russian and maybe Chinese in the upcoming years.

What does your typical day involve?

At the beginning of each training week, the astronauts are welcomed to a briefing during which we plan to clarify the schedule and perform the necessary adjustments for the following days. Astronauts are very busy and are often away from home, so being flexible and accommodating is an integral part of the job.

A training session can fluctuate between 30 minutes and several days, the amount of trainees per session can also vary from one crew member to a group of more than 10 trainees. Training can take place in various locations, for large groups we prefer to use dedicated classrooms, for hands-on crew training we either train in the Columbus mock-up or in training booths dedicated to standardised payloads (International Standard Payload for racks). We have six payload training booths at the EAC in which flight-like training models of the on-board equipment are available for accurate and precise training.

The training sessions are always structured and paced the same way to generate some teaching/learning automatisms. Every training session has precise learning objectives as well as defined strategies. We deliver trainings with different learning levels depending on the astronaut assignments, from simple knowledge to advanced manoeuvres and troubleshooting of equipment.

Astronauts often need to explain and justify the potential benefits of their scientific activities aboard the ISS, so it is important to describe the interests and advantages that these experiments can bring to humankind in general during the lessons.

Training content is collected from different sources, different teams, often from different countries all working in their specialty; most of the time is occupied by searching, reviewing, compiling and organising data in order to build future lessons.

Are you in contact with the crew on-board the ISS?

There are different ways to get in contact with the ISS: we can establish an audio link via the low-frequency S Band, a video link via microwave frequency Ku Band and also by email. Formal audio communications between Ground and Station are performed by specialised ground controllers: EUROCOM for ESA and CAPCOM for
NASA. As an instructor, I monitor the schedule of on-board experiments assigned to crew members I trained. In case of abnormal situations I could be involved in troubleshooting activities in coordination with EUROCOM, but it remains rare to communicate with the station in real time unless it's required by the crew.
After some years of training, it is also natural that some astronauts become good friends and it is delightful to exchange emails, receive some phone calls or even to participate in video conferences with them.

Would you have liked to be an astronaut yourself?

In all honesty, not really, or at least not yet. Maybe everything is set during the childhood, segregating kids according to what they want to play: some kids will play with small cars or with dolls, others will play war games...I personally played at being Zorro until quite an advanced age...maybe the kids who want to be Zorro don't really want to be astronauts?

More seriously, most of my colleagues have dreamt of space, rockets and freeze-dried food since childhood, and I like to believe that it is exactly what fascinated me when I arrived at CNES in 2007. Until then, I had focused my interests on my studies, my social network, Physiology, Medicine and Technology, without hearing much about space. Things fell into place when I 'landed' at CNES, discovering the enthusiasm of space addicts. Despite never seeing any of the Star Wars movies, growing up in the middle of nowhere in the Alps and flying for the first time in my 20s, I definitely found my place in this environment, simply seeing things in a different perspective, which can in some cases be an asset.

Have you found your place easily as a woman in the space industry?

Nowadays it is acknowledged that people of any gender can do most jobs. Nevertheless, the numbers don't lie, women are still a lot less represented in some sectors such as science and engineering. I do not know the exact statistics in the space sector at ESA or at EAC, but I do know that ESA is putting more efforts into equal opportunities.

Is there a funny anecdote from training that you could share with us?

During simulations, I often have to act as a 'crew surrogate', by playing the role of one or several astronauts on board the ISS, to make procedures and anomalies seem more real. This includes maintaining audio and video links with the teams. For the sake of accuracy, I often practice my Russian and Texan accents to make things sound more 'realistic' in my communications with the ground! I also perform very serious tests on cups, mugs or glasses I have to place in front of my mouth and speak through as a mock gas mask during simulated emergency procedures. Fortunately a little laughter never hurt anyone!