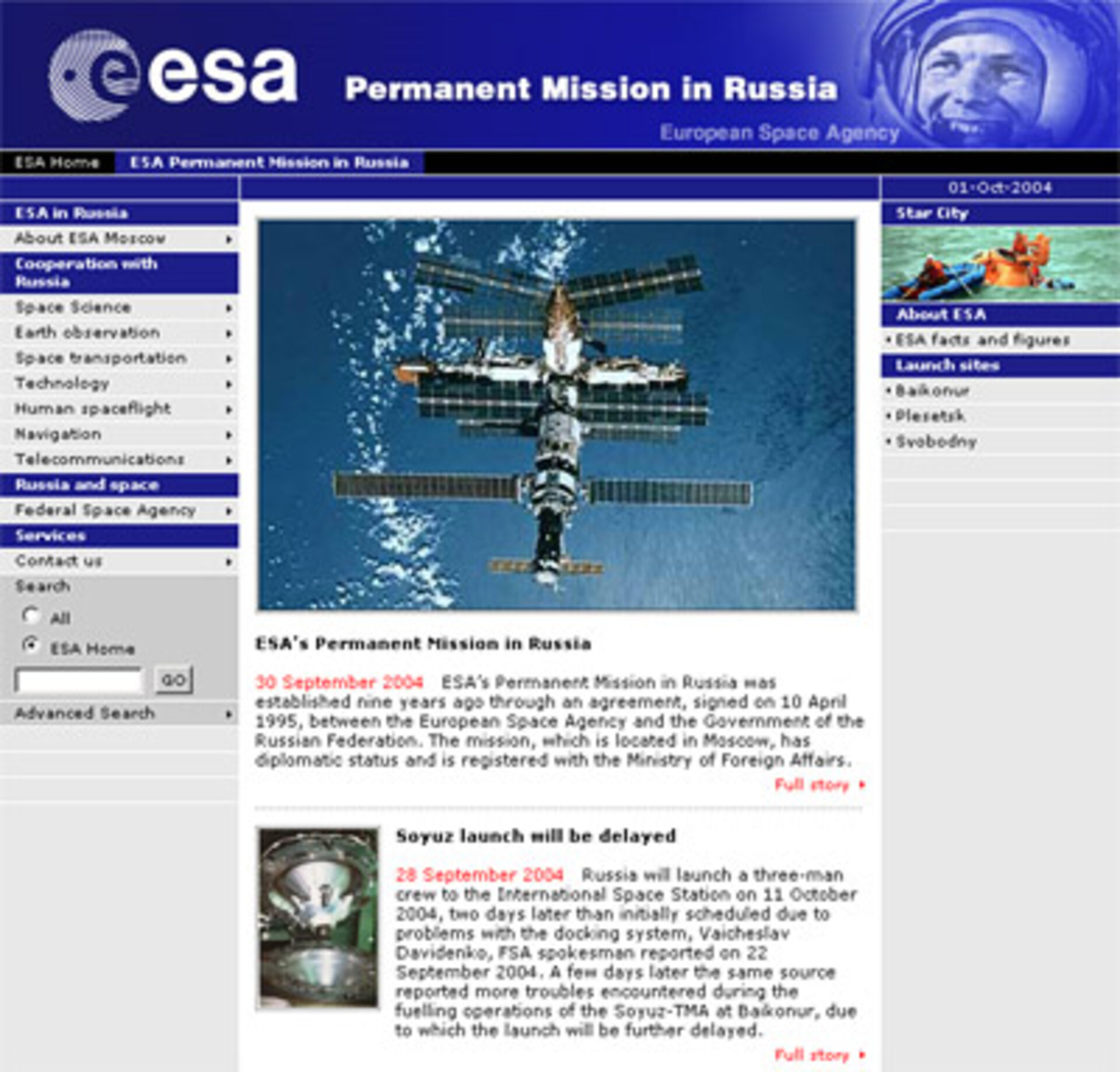 A new site launched today showcases the activities of ESA’s Permanent Mission in Russia. To learn more about it, visit www.esa.int/emo.

ESA’s Permanent Mission to Russia was established nine years ago through an agreement, signed on 10 April 1995, between the European Space Agency and the Government of the Russian Federation. The mission, which is located in Moscow, has diplomatic status and is registered with the Ministry of Foreign Affairs.

As ESA’s office in Russia, ESA Moscow is a showcase for Europe’s achievements in space, facilitates the exchange of information between ESA and Russia, fosters cooperation between the two, and provides logistic support for ESA staff and contractors visiting Russia.

“Russia and Europe are in the process of building a close partnership for space," explains Alain Fournier-Sicre, Head of ESA’s Permanent Mission to Russia. "Prime Minister Mikhail Fradkov has recently been welcomed in the ESA Technical Center (ESTEC) in Noordwijk by ESA's Director General J-J. Dordain. During the last ten years the ESA Permanent Mission in the Russian Federation has supported a number of well-known joint projects and has participated in this evolution of ESA/Russia relations from cooperation towards partnership.

"Now we open the public website of the ESA Permanent Mission to broadly inform the space specialists and the public at large about previous, present and potential future achievements illustrating this growing strong partnership between two major space powers.”

Over the years, cooperation between ESA and Russia has strengthened and widened; Russia participates in various ESA projects and ESA uses Russia’s launch facilities for a number of its missions.

ESA's Director General has set ambitious goals in his Agenda 2007, in particular for developing cooperation with Russia, which is becoming a major partner of the European Union and ESA.

ESA Moscow has particularly close working relations with the Federal Space Agency as well as with Russian companies participating in ESA space projects. One of ESA Moscow’s most important roles is to facilitate cooperation between the European and Russian space industries. It arranges for ESA staff to visit Russian companies to assess the status of joint projects, and invites representatives of Russian organisations and industry to its premises to learn more about ESA and to discuss matters of joint interest.