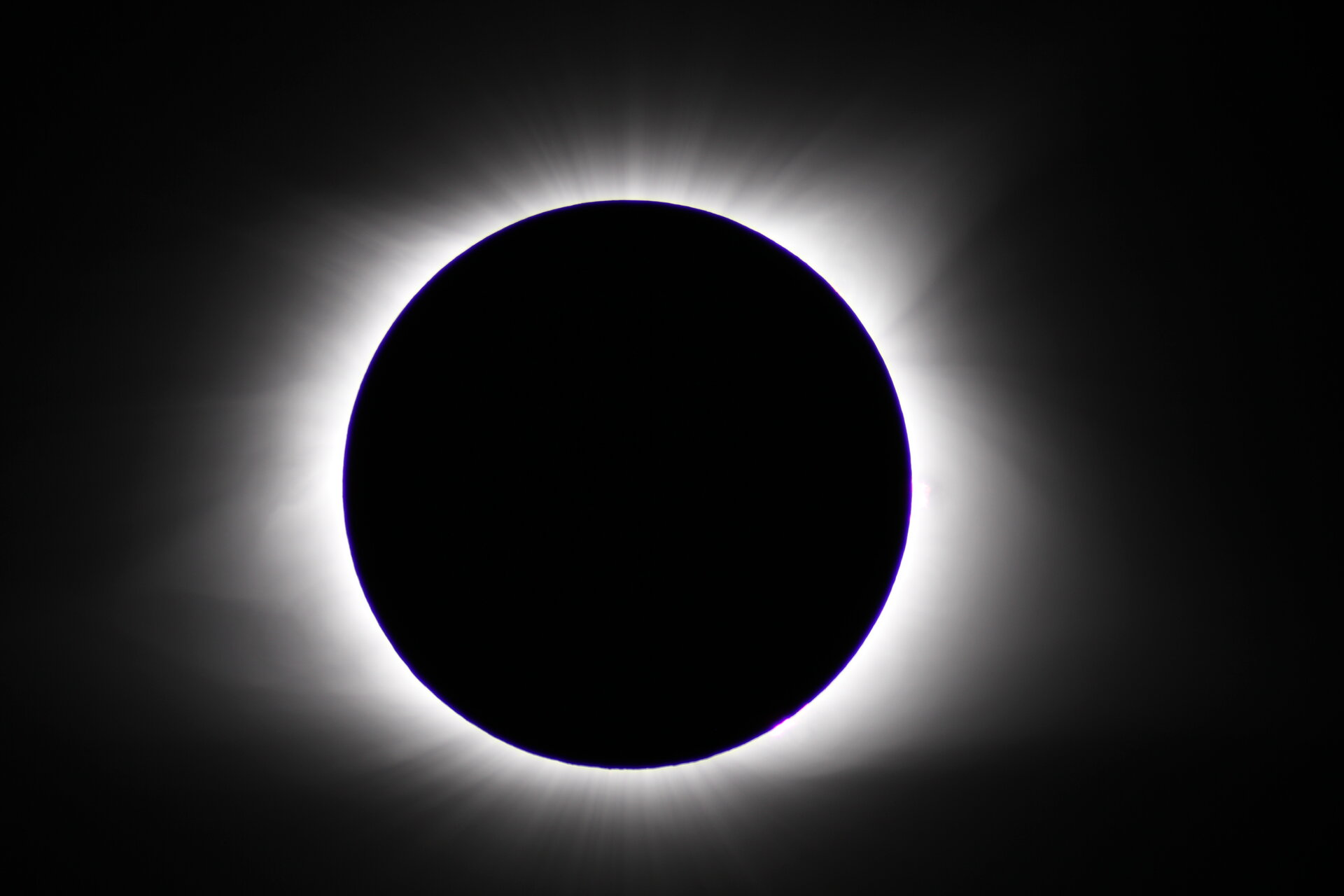 While ground-based observers experienced the awe-inspiring view of a total solar eclipse yesterday, astronauts aboard the International Space Station, and our Sun-watching satellites, enjoyed unique perspectives of this spectacular sight from space.

Thanks to a quirk of our cosmos, the Moon’s average distance from Earth is just right for it to appear as the same size in the sky as the significantly larger Sun: the Sun’s diameter is 400 times wider than the Moon’s, but it is also 400 times farther away.

When the two align such that the Moon slides directly between Earth and the Sun, it appears to cover our star completely, temporarily blocking out its light and creating a total solar eclipse for those along the narrow path cast by the Moon’s shadow.

Yesterday, 21 August, observers situated along a 115 km-wide swath stretching from Oregon to South Carolina in the US were under this path of totality. The eclipse shadow took about 1.5 hours to cross the continent, with the peak totality lasting for about 2 minutes 40 seconds.

A team of astronomers from ESA imaged the eclipse from the US and captured phenomena such as beads of light shining through gaps in the lunar terrain, and the glittering ‘diamond ring’ effect as the last and first slither of sunlight glints through immediately before and after totality.

They also imaged the Sun’s extended atmosphere, the corona, which is visible to the naked eye only during totality when the rest of the Sun’s light is blocked out.

Astronomers at ESA’s Spaceport in Kourou, French Guiana, enjoyed a partial eclipse after totality had finished in North America. On the north-eastern coast of South America, it was one of the last places to observe the eclipse before it ended worldwide.

Lucky observers in the westernmost parts of Europe also captured a few moments of the partial eclipse at sunset, including astronomers observing from ESA's European Space Astronomy Centre near Madrid, in Spain.

Meanwhile, from their unique vantage point about 400 km above Earth, astronauts aboard the International Space Station, including ESA’s Paolo Nespoli, viewed partial eclipses and the Moon’s fuzzy shadow on the surface of the planet. The space station traversed across the path of totality three times on its 90 minute-long orbits around the Earth. 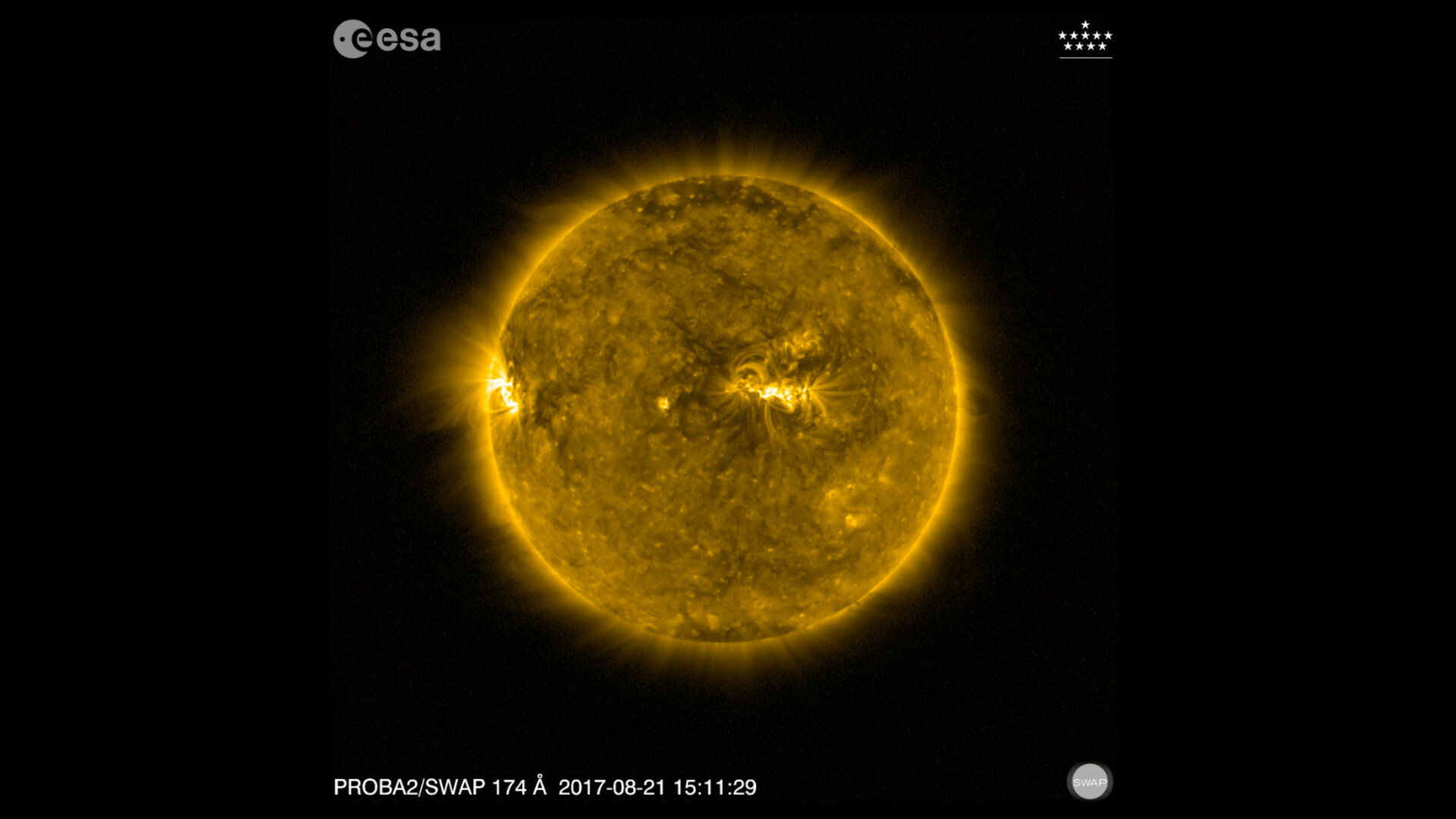 Also orbiting Earth 14.5 times a day in its 800 km altitude polar orbit is ESA’s Proba-2 satellite, which was predicted to see the Moon pass four times through its field-of-view, with three partial eclipses.

Further away, some 1.5 million kilometres from Earth towards the Sun, the ESA/NASA Solar and Heliospheric Observatory, SOHO, captured views of the Sun’s activity and extended coma.

For SOHO, eclipses are business as usual: it permanently blocks out the light from the Sun’s disc in order to see fine details in the corona and features in the Sun’s extended atmosphere.

These space-based images provide useful context for the ground-based astronomers, offering wide views of the corona and the Sun’s activity at the time of the eclipse, and at a range of wavelengths. This helps to link the features seen at a range of scales, giving an insight into the Sun’s dynamic activity.

More information and images from the various observing campaigns are available at the following links:

Note: this article may be updated as more images/video become available.