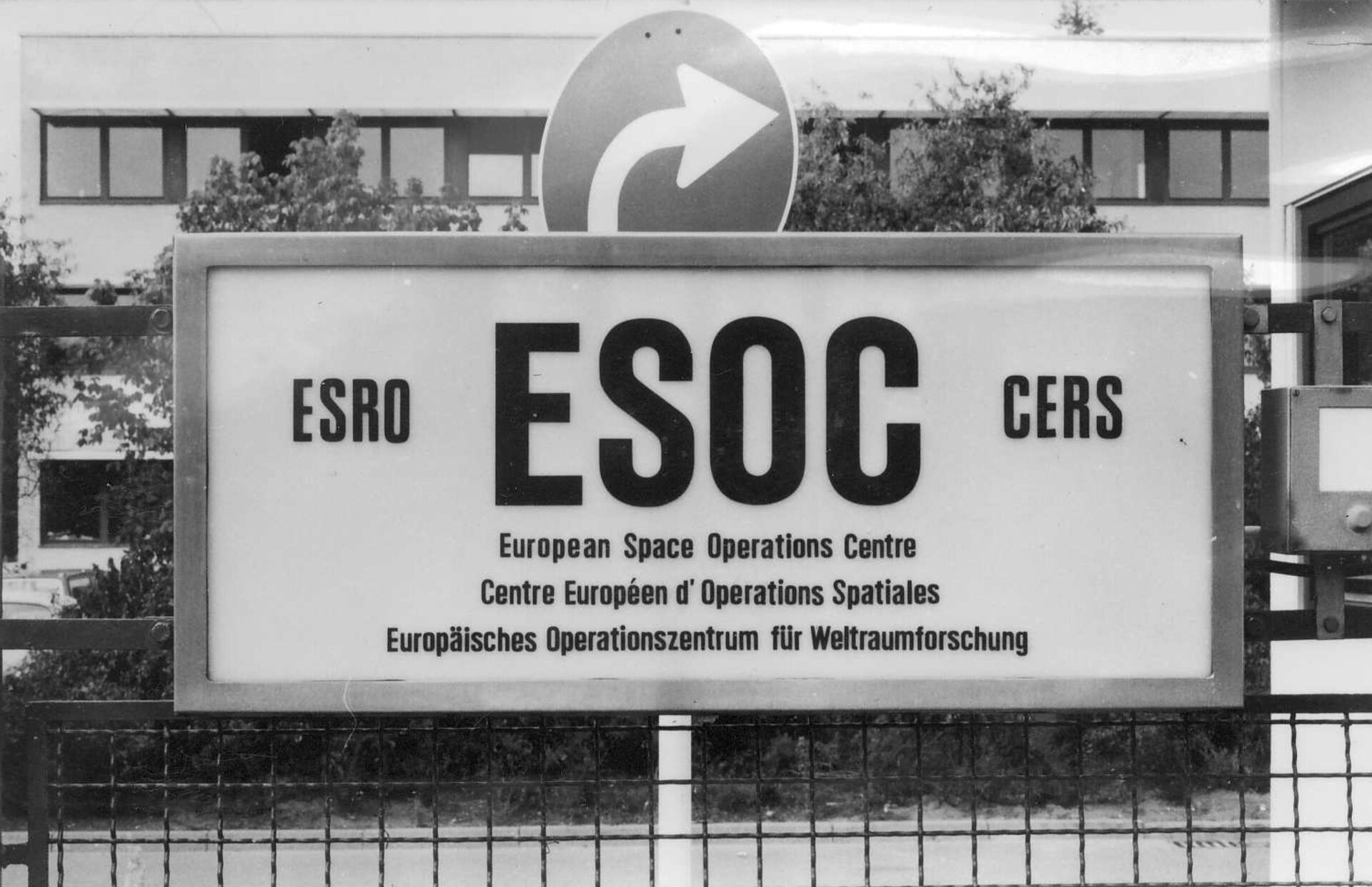 The move of Control Centre staff from Noordwijk to Darmstadt took place an uncomfortably short time before the launch of IRIS (ESRO-2), and many staff were working very long hours and at the same time were grappling with the problems of moving homes and families into a new country with different ways.

Excerpted from "How to Survive in Space: A light-hearted chronicle of ESOC," Vol. I 1963-1986 by Madeleine Schäfer. In Chapter 2, it's 1967, and the space control centre has just been relocated from ESTEC to the newly named ESOC, a facility where spacecraft operations and data processing can be efficiently combined. ESRO - the European Space Research Organisation - was a forerunner of today's European Space Agency.

ESDAC staff had hardly had time to get settled in their new premises when trouble began.

In a resolution from April 1967, the ESRO Council decreed that the Control Centre of the ground stations network should be moved from ESTEC to ESDAC. As ESRO II was to be launched in May 1968 the move had to take place very quickly - and it did! The first Control Centre members arrived in December 1967. The Darmstadt housing agents had a field day. In the sixties Darmstadt still belonged to an area where housing was limited and very expensive.

Excerpts from the Annual Report 1968 by the Chairman of the Staff Association state:

The move of Control Centre staff from Noordwijk to Darmstadt took place an uncomfortably short time before the launch of IRIS (ESRO-2), and many staff were working very long hours and at the same time were grappling with the problems of moving homes and families into a new country with different ways ...

The estate agents in Darmstadt have had a particularly good year, because ESRO was unable to provide accommodation for staff and had to make use of the local open market in houses and flats; it was also unable to find a way of paying agents' fees, though in many cases these were an unavoidable part of the expenses of moving ...

Salaries at ESOC were good, however, so the great wave of new staff gradually managed to get adequate housing, if not in Darmstadt then in the surroundings.

Situation at ESOC was not solved so easily

ESDAC - or ESOC as we were now called - suddenly blew up to a total of 184 staff, and the building creaked and groaned at its seams.

The new building was totally inadequate. It had been built to house a new super computer (an IBM 360 - the crème de la crème of computers), its attendants (mathematicians, physicists and programmers), and a few administrative staff, in total about 80 people.

It had not been designed for an entire Control Centre with sophisticated wiring and air-conditioning requirements, not to mention the Control Centre people from ESTEC plus a plethora of new staff. ESDAC - or ESOC as we were now called - suddenly blew up to a total of 184 staff, and the building creaked and groaned at its seams.

Official reports from that and subsequent periods blandly state that the move of the Control Centre had taken place, and that the construction of the new Control Centre (it was actually called 'Operations Room' then) would be completed in time for the ESRO II launch, glossing over the fact that the place was more like a disturbed ant hill than anything else.

There were people everywhere. Every single bit of space was made use of. Even one of the lavatories in the basement was turned into a temporary store room. The 'Ladies' and 'Gents' had either to share the same facility or ascend one floor to the more civilised upper regions.

We in the Orbit Team considered ourselves extremely lucky. We had actually managed to get for the whole team - I think we were 6 or 7 people at the time - a large room in the basement. The only daylight we had filtered through two cellar gratings, the heating was unreliable and ventilation non-existent, but we had the room all to ourselves and were happy.

The Operations Room was in fact finished and equipped in time for the ESRO II launch, but only because of the superhuman effort.

Extension building operations began immediately. The administrative staff were ousted out of their comfortable new quarters and ignominiously bundled into pine-wood barracks, which had been erected in the car park in front of the main building.

Visits to Admin in those days always had for me Christmassy connotations - the smell of pine wood was very pervasive. It could become very hot there in the summer, for there was no air conditioning of any kind, but the winters were not so bad.

There were electric storage heaters, though a number of them were installed in the central corridor, so that people had to execute complicated manoeuvres to pass each other on the way from one office to the other.

Looking through my files for the following year, I see that the Accounts Branch, at least, escaped bivouacking, for a note from the Head of Finance informs me succinctly that from the 13th March, 1969, the Accounts Branch would be moving to the Basement of the Main Building.

The Operations Room was in fact finished and equipped in time for the ESRO II launch, but only because of the superhuman effort on the part of the newly formed General and Technical Services.

Madeleine Schäfer joined ESDAC - the predecessor of ESOC - on 22 June 1964 as short-hand typist and secretary; there were just seven scientific and support staff at the time. She retired in 1997.