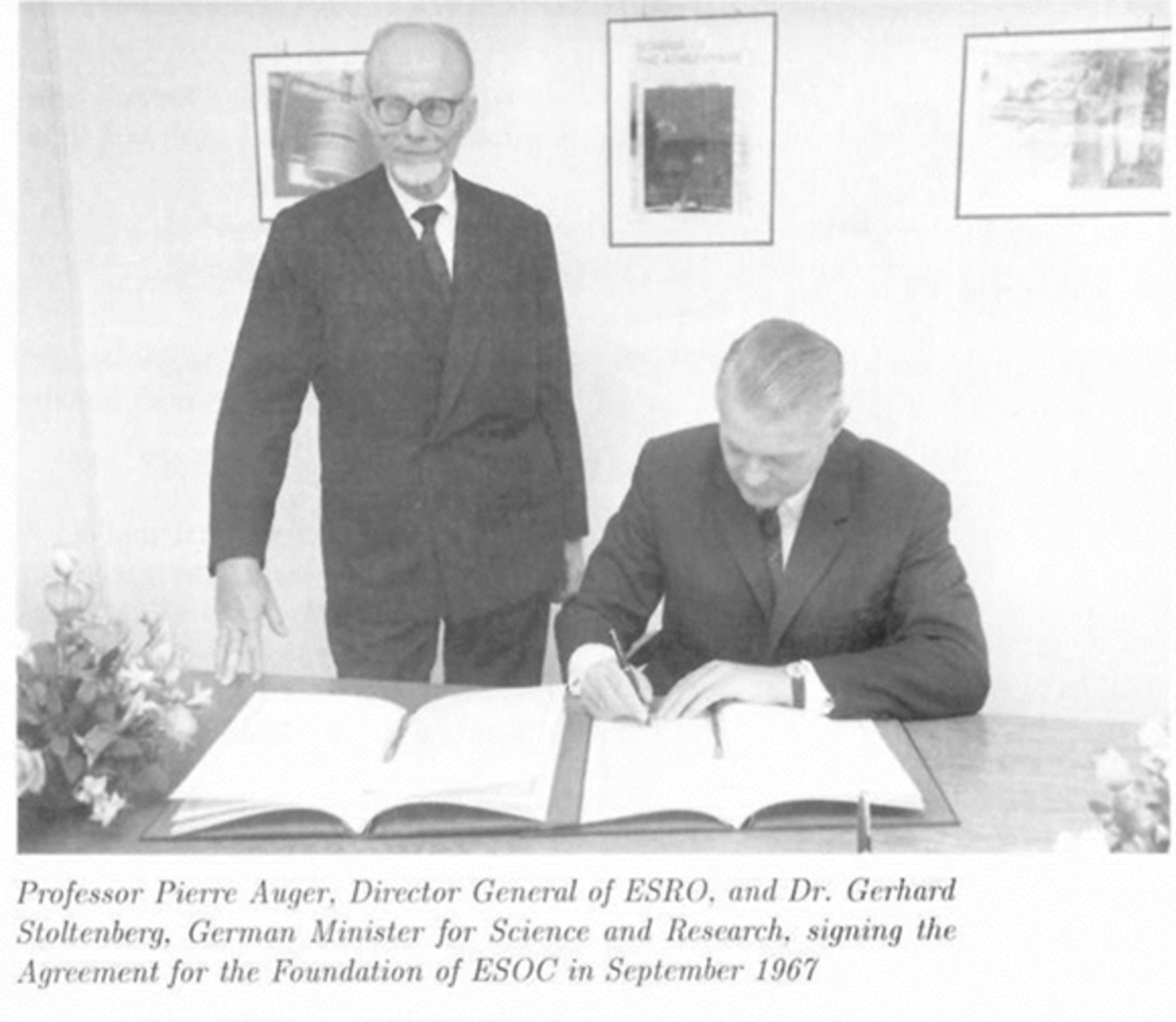 ESOC – the European Space Operations Centre, in Darmstadt, Germany – has served as Europe’s ‘gateway to space’ for half a century. In 2017, ESOC is celebrating its 50th anniversary, highlighting a rich history of achievement in space.

Since inauguration on 8 September 1967, teams at the centre have operated 77 spacecraft, ranging from telecom, weather, Earth observation and climate monitoring satellites to spacecraft studying the Sun or peering deep into our Universe. Exploring our solar system, ESOC has flown missions to the Moon, Mars and Venus, as well as three epoch-making triumphs: Giotto’s flyby of Halley’s Comet in 1986, the Huygens landing on Titan in 2005 and Rosetta’s delivery of Philae to comet 67P/Churyumov–Gerasimenko in 2014 – humanity’s first-ever landing on a comet.

More recently, ESOC has launched satellites for Europe’s flagship navigation fleet, Galileo, and the EU's new Copernicus programme, and today serves as a powerful catalyst for commercial and scientific growth for space industry across Europe and especially within the Frankfurt/Rhein-Main region and its host German State, Hessen.

This special series of articles takes a look at the centre’s beginnings in 1967, the pioneering spirit of the early decades, the steady growth of mission operations expertise in Darmstadt, developments at the centre and milestones in European space flight, ESOC’s evolving economic importance and the present challenges and future opportunities. 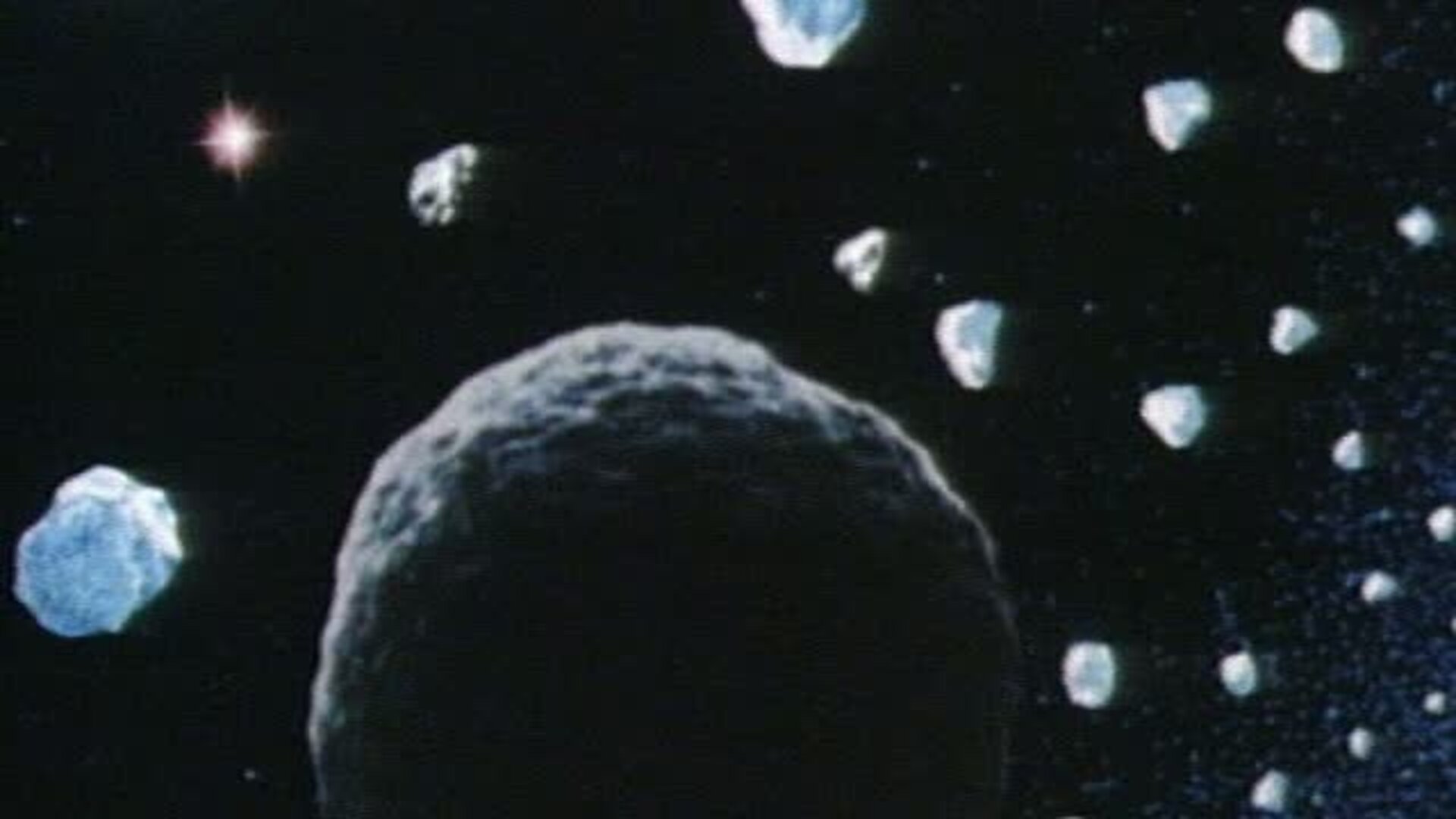 1980s video on Giotto, featuring scenes at ESOC and interviews with Wolfgang Wimmer
Access the video

“It is easier to found an international organisation than to close an existing one,” stated Germany’s Minister of Research Gerhard Stoltenberg at the inauguration of ESOC in Darmstadt on 8 September 1967.

It is safe to say that he probably never imagined the scientific, technical, political and economic spheres into which the new organisation would venture. Half a century ago, the campus, located by the woods on the western edge of Darmstadt between the autobahn and the city’s main train station, consisted of no more than a handful of makeshift buildings and wooden shacks, staffed by fewer than 100 experts.

Yet the location, newly dubbed the ‘European Space Operations Centre’ had been tasked with important work: controlling satellites launched for the five-year-old European Space Research Organisation (ESRO) – a significant milestone for European ambitions to orbit its own scientific space missions.

The Russians had already claimed the lead in space technology, having launched the first satellite, Sputnik, into orbit in 1957, and the first astronaut, Yuri Gagarain, into space in April 1961. In March 1966, the Soviet Union's Venera 3 had become the first spacecraft to reach the surface of another planet. Yet by the late 1960s, the space race was being won by the Americans and, less than two years after ESOC’s inauguration, an American astronaut took the first steps on the Moon.

A few years later, in 1975, ESRO was merged with the European Launcher Development Organisation (ELDO) to form the European Space Agency. It was just eight years after ESOC’s inauguration and the centre and its teams have never looked back.

How a mainframe computer ensured that space travel came to Darmstadt

“Space travel came to Darmstadt because one of Germany’s few mainframe computers was at the German Data Centre, located in the Rhein strasse, at the time,” recalls Kurt Debatin, head of ESOC’s Computer Department, and later Head of Mission Operations, who retired in 1997.

For this reason, the European Space Data Analysis Centre (ESDAC) first began operating in Darmstadt in 1963, collocated in offices at the German Data Centre (DRZ – Deutsche Rechenzentrum – today the Fraunhofer Institute for Secure Information Technology). Satellite data were analysed there on behalf of ESRO.

Four years later, ESDAC was given a new orientation, namely mission control, together with a new name and a new location. The assignment meant major change, as until then, engineers at the European Space Research and Technology Centre, in Noordwijk, The Netherlands, had performed that function. In 1967, many were transferred to Darmstadt’s new European Space Operations Centre, which relocated to its current location on Robert Bosche strasse.

Kurt Debatin was one of the first ‘space generation’ in Darmstadt.

In 1965, he had joined ESDAC as a systems analyst. “The establishment of ESOC two years later was a real turning point,” says the former employee, who is a member of the pan-European Association of ESA Retirees.

A glance at historic photos of the main control room in that period gives insight into what the former ESOC computer expert meant. Although computers filled entire rooms, today’s mobile phones far exceed their capacities; keyboards were non-existent at the time and commands were input using punch cards. Computer displays were unknown.

“There were only line printers and they spewed out only octal numbers which we had to convert in our heads,” adds Debatin. Engineers could only deduce from the computer’s flashing signals whether the satellite was working, while actually understanding the data took analysis.

In the summer of 1967, Herwig Laue , a student of mathematics at TH Darmstadt, as today’s Technische Universität (TU) Darmstadt was then know, came to ESOC to do intern work, trying out his knowledge in the Flight Dynamics division. He returned regularly for student work terms, landing a position as a contract engineer after graduation. In 1972, he became a permanent staff member, specialising in spacecraft attitude control.

Back then, the physical fundamentals of trajectory calculation and determining orbits were similar to today’s methods – albeit calculations were made using a slide rule and computer science was still in its infancy.

“We handed our bundles of punch cards for path calculation into the computer centre and received a paper print-out a few days later. There was no direct access to the computer. If there was a single error on any punch card, everything had to be recalculated,” Laue recalls.

His colleague, Wolfgang Wimmer, spent 35 years working in mission control, 15 of them as managing flight director, retiring in 2004. During the 1960s and the early 70s, the flight paths of satellites could not be altered, as satellites had no propulsion capability once their rocket had flung them into orbit.

“Everything hinged on the rocket and how it positioned the satellite,” he explains. Some 30 per cent of rocket launches failed in the early stages. “That’s why two satellites were always built.”

The same applied to ESRO satellites, which also often required two flight models. Launched in May 1967, ESRO-2A was unsuccessful due to failure of its U.S. Scout-B rocket. One year later, in May 1968, ESRO-2B, was successfully launched aboard another Scout-B, becoming the first satellite to be controlled from ESOC. ESRO-2B carried the same instruments as 2A and studied solar and cosmic radiation.

The probe’s scientific data was saved on NASA’s so-called ‘endless recorders’. “Their reliability was not as high as modern systems,” says Wimmer.

Europeans lagged behind in the early years. “The Russians led the way and NASA’s budget was always ten times higher than ours. We Europeans were not really taken seriously,” recalls Manfred Warhaut, Head of Mission Operations at ESOC until 2013.

But that changed with later missions such as the Giotto probe, which in 1986 imaged the nucleus of Halley’s Comet in a flyby, and Huygens, which landed on Titan, a moon of Saturn, in 2005. “And we even overtook the Americans with Rosetta,” says a proud Warhaut, who managed the team flying the mission from launch until 2006.

Around 70 permanent employees worked at ESOC in the early years. There were few contractors or people in the employ of contracting companies, recalled Hermine Grube, who began working in Human Resources in 1968 and remained until 2010.

Today, that ratio is reversed, and ESOC now has about 266 permanent employees out of some 900 in total; the majority are contractors.

“One thing was similar from the start – the familiar atmosphere and the international character. English and French have always been spoken. We became a European microcosm early on,” recalls Herwig Laue.

The pioneering spirit was palpable at Darmstadt’s ESOC campus and was like Silicon Valley, said Lauer, adding: “We felt that we are at the forefront of technical progress. We were young and motivated.”