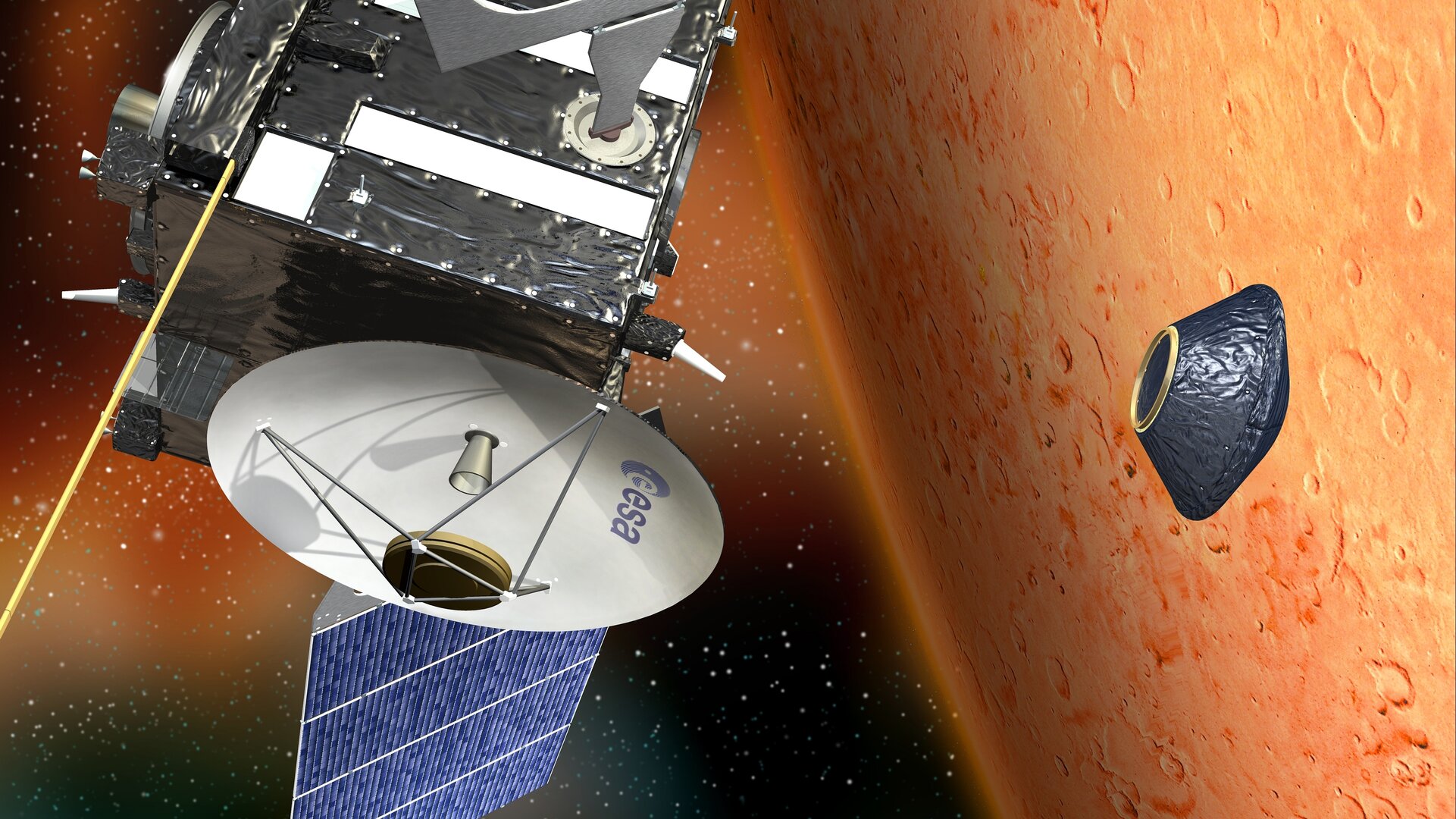 A row of tiny models of all the satellite missions on which he has ever worked line a sideboard in Mike McKay’s office. They include the first International Sun-Earth Explorer (ISEE), the Exosat X-ray radiation mission, the ERS-1 and -2 Earth observation missions, SMART-1 and Mars Express. A photo of his alma mater, Queen’s University Belfast, is alongside them.

The young student from Northern Ireland went to ESA’s European Space Research and Technology Centre (ESTEC) in The Netherlands on a scholarship in 1979; McKay had done his bachelor’s degree in aircraft construction followed by a master’s in computer science. Earlier, in 1969, he had watched television footage of Neil Armstrong’s first steps on the Moon and had dreamed of becoming a pilot and of flying – ideally to space.

His professor put him in contact with ESA, and McKay spent six months doing research on cosmic solar particles and cosmic radiation, which won him a job at ESTEC starting in 1980. He first came to Darmstadt with an ESTEC team. “I thought I’d stay for a year,” he recalls, “but the attraction proved so great that I never wanted to leave this ‘orbit’,” he now jokes.

As flight director, McKay managed operations for Mars Express, Europe’s first mission to a planet. The spacecraft, comprising the Mars Express orbiter carrying the UK-led Beagle lander, launched in June 2003 and entered orbit around the Red Planet on Christmas Day.

ESA became just the third agency to enter Mars orbit, making Europe the first to do so on the first attempt. 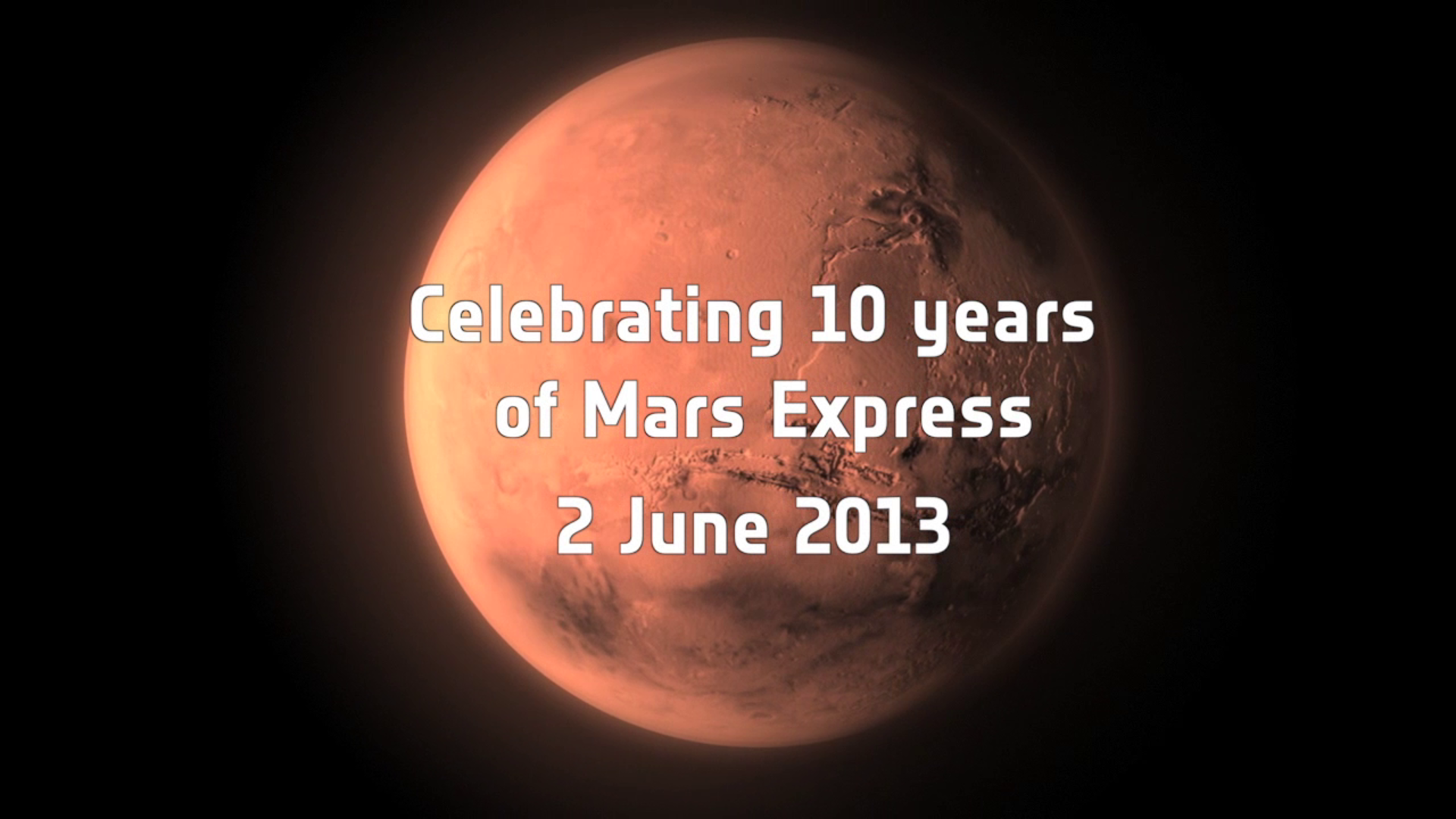 But, perhaps predictably, not everything went according to plan. Deployment of one of the satellite’s two 20-metre long radar antennas on the MARSIS radar instrument proved challenging, as the antenna’s arms would not fold out as planned. MARSIS was intended to search for fluid or frozen water several kilometres below the surface. Full deployment of its antennas was crucial for science, however, one of the 13 hinges was stuck and had likely frozen over.

“We hit on the idea of simply turning the satellite towards the Sun to heat up the hinge,” says Mike. Taking place 144 million kilometres from Earth, the fix provided some nerve-wracking hours. However, the team’s efforts were rewarded, the antenna deployed and the mission could be continued. Thanks to the instruments aboard the Mars Express, large amounts of water ice were verified to exist on the Red Planet’s southern polar ice caps, and traces methane were found in the atmosphere. “Not everyone could have done that,” said McKay, now 61 and serving as advisor to ESOC management on strategy and co-ordination issues.

Global interest in ESOC had become noticeable as early as Mars Express. “If Beagle had worked, it would have been a sensation,” says McKay, in reference to the mission’s landing probe, which was developed under the auspices of several British universities and industry.

Beagle 2 was released from the orbiter on 19 December 2003 and reached the planet’s surface around five days later. However, no signals were received despite numerous listening attempts and the search was eventually abandoned in February 2004. “Mars Express was successful, but all eyes were on Beagle,” says McKay, with a hint of regret.

Eleven years later, in 2015, Beagle was discovered intact on the surface in images acquired by NASA’s Mars Reconnaissance Orbiter. Today, McKay is aware of the success: the landing was successful, but two out of four solar panels would not fold out, apparently blocking communication. Nations active in aerospace have carried out 53 lander or orbiter missions to Mars so far – only 15 were fully successful. Most recently for Europe, ESA’s Schiaparelli landing module, delivered by the ExoMars Trace Gas Orbiter in October 2016, achieved partial success.

Mars was not ESA’s first deep-space destination: that was Giotto. In 1986, it made the closest-ever (at that time) approach to the nucleus of a comet, Halley.

Its images showed for the first time the shape of a comet nucleus and found the first evidence of organic material in a comet. In 1992, after a long cruise through space, Giotto was directed to Comet Grigg-Skjellerup. It sent back a wealth of information, passing just 200 kilometres from the nucleus. 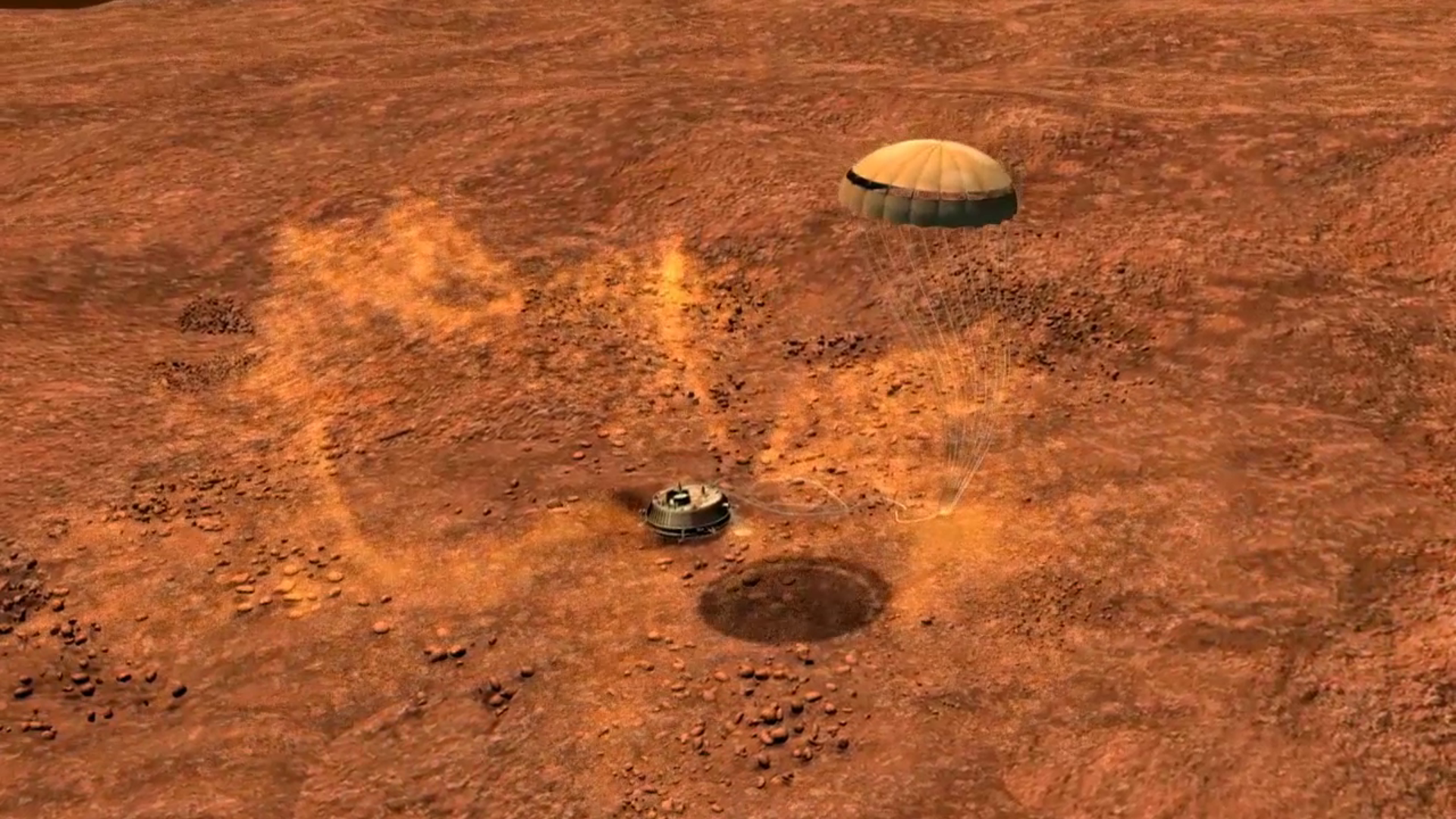 After Mars Express, other ESA missions to bodies in the Solar System followed: the international Cassini-Huygens mission, a joint NASA/ESA/ASI mission to Saturn and its moons consisted of the NASA/JPL-led Cassini orbiter and the ESA/ASI-led Huygens lander.

Huygens, operated from ESOC, landed on Titan in January 2005 and returned data from the surface, achieving the distinction of becoming the farthest distance any spacecraft has successfully landed away from Earth. The touchdown was covered by media worldwide, and presaged the hugely successful Cassini exploration of the enigmatic Saturn system, which continued for over a decade and will have ended in mid-September 2017.

On its final ‘Grand Finale’ tour of Saturn, including daring orbital dives between the planet and its rings, ESOC again played a direct role, using the Estrack network to work with NASA and provide 22 ground station tracking passes to ‘catch’ signals from Cassini in support of radio science.

This provides a fitting ‘book end’ to the support given to Huygens by NASA at the start of the mission. Receipt of Cassini’s signals via the ESA stations in Argentina and Australia marked the farthest-ever signal receipt for ESTRACK, across 1.4 billion kilometres of space.

Voyage to the Moon

Between 2003 and 2006, teams at ESOC flew ESA’s SMART-1 mission to the Moon, demonstrating solar-electric propulsion and innovative mission control techniques.

In 2005, Venus Express departed for Earth’s sister planet, achieving orbit in 2006 to conduct a hugely successful 9-year mission ending in 2015 by demonstrating experimental aerobraking techniques, a new skill for the mission control teams at ESOC.

In March of 2016, ESA’s second mission to the Red Planet, the ExoMars Trace Gas Orbiter, went aloft, swinging into orbit at Mars in October that year. Teams at ESOC will spend most of a year conducting a challenging aerobraking campaign to lower it into its final science orbit.

JUICE, an eight-year mission explore Jupiter’s icy moons in the outer Solar System is scheduled to begin in 2022.

In addition, as of August 2017, three more missions that will explore our solar system or look up at our galaxy and the Universe are in preparation at ESOC: Solar Orbiter, going to the Sun, plus Euclid and Plato, which will observe dark matter and exoplanets, respectively.

By the time JUICE lifts off, Mike McKay will have retired, and he admits he’ll miss the detailed work and the pioneering, team spirit at ESOC: “All of us consider ourselves Europeans and we want to achieve something as a team. That is something special and it’s our winning formula.”

All of us consider ourselves Europeans and we want to achieve something as a team. That is something special and it’s our winning formula.