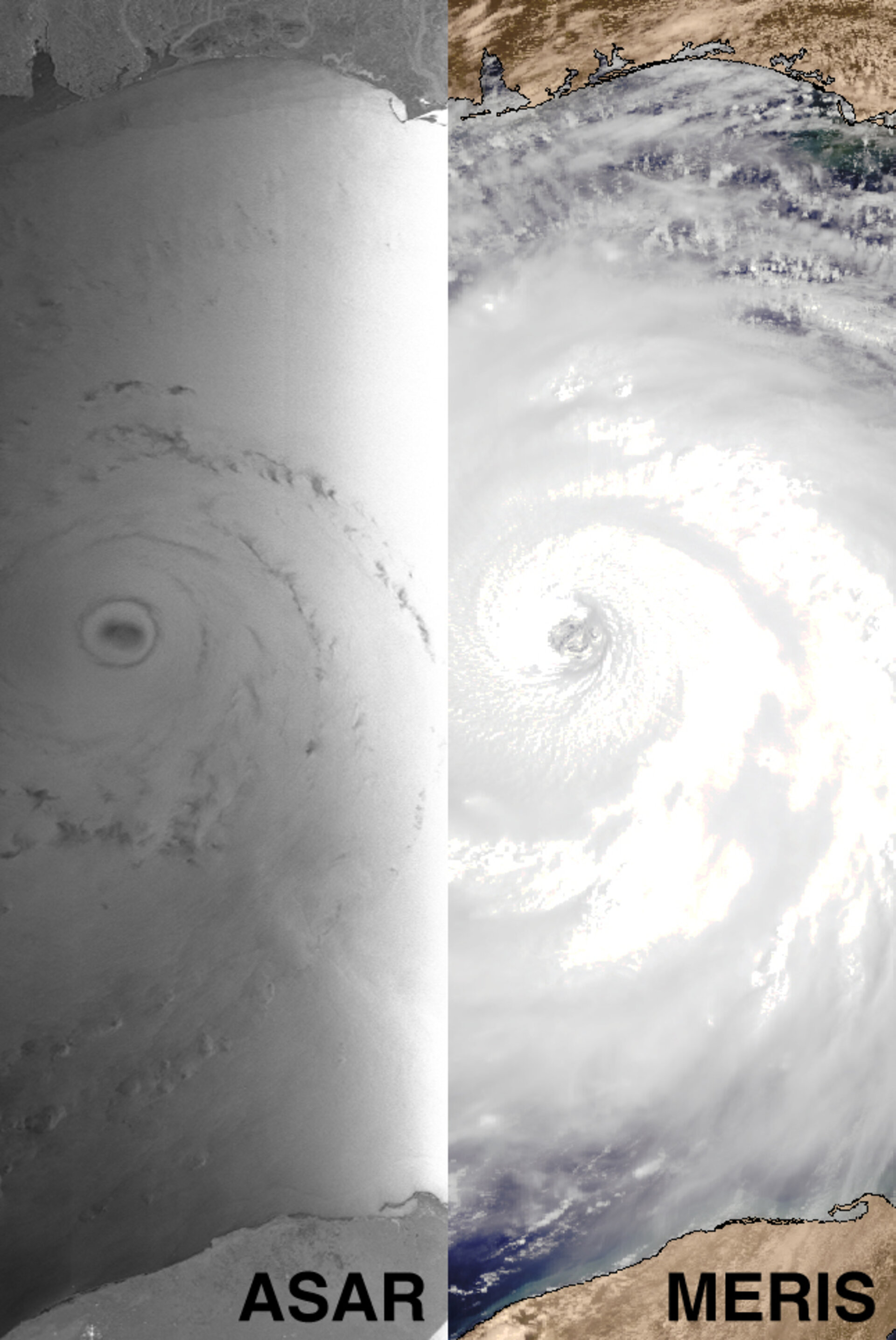 ESA's multi-sensor Envisat satellite has gathered a unique view of Hurricane Katrina in the Gulf of Mexico. While an optical image shows characteristic spiralling cloud patterns, a simultaneous radar observation pierces through the clouds to show how Katrina's 250-kilometre-an-hour winds scour the sea surface.

At the time of acquisition Hurricane Katrina was a maximum Category Five on the Saffir-Simpson scale. Further ESA acquisitions are being prioritised because the International Charter on Space and Major Disasters has been activated.

The eye of the hurricane is seen clearly in both images, with the wall of the eye clearly visible in the MERIS image, the area of the hurricane where the fastest winds and highest rainfall is found.

The ASAR instrument works by recording signal backscatter based on surface roughness: the wind-free storm centre – seen enclosed within a dark ring feature measuring approximately 60 kilometres across - shows up darker because the waters here are hardly rippled by comparison to the sea around it.

Hurricane Katrina, which formed in the Bahamas in mid-August, struck South Florida on 25 August, killing nine people and leaving a million more without electricity. It is poised to strike coastal Louisiana and New Orleans. Hurricane-strength winds of at least 119 kilometres per hour currently extend 136 kilometres from its centre.

Katrina has today dropped from a maximum Category Five to a Category Four storm on the Saffir-Simpson scale, but forecasters warn it could again grow in intensity having made landfall.

With serious flooding anticipated in the hurricane's wake as well as direct storm damage, the US Geological Service (USGS) activated the International Charter on Space and Major Disasters on 27 August.

ESA is a founding member of the Charter, which represents a joint effort by global space agencies to put resources at the service of rescue authorities responding to major natural or man-made disasters. To date the Charter has been activated more than 80 times.

A hurricane is basically a large, powerful storm centred around a zone of extreme low pressure. Strong low-level surface winds and bands of intense precipitation combine strong updrafts and outflows of moist air at higher altitudes, with energy released as rainy thunderstorms.

Envisat carries both optical and radar instruments, enabling researchers to observe high-atmosphere cloud structure and pressure in the visible and infrared spectrum, while at the same time using radar backscatter to measure the roughness of the sea surface and so derive the wind fields just above it.

Those winds converging on the low-pressure eye of the storm are what ultimately determine the spiralling cloud patterns that are characteristic of a hurricane.

Additionally Envisat instruments can potentially be used to take the temperature of the warm ocean waters that power storms during the annual Atlantic hurricane season, or detect sea height anomalies related to warm upper ocean features known as 'loop currents'.