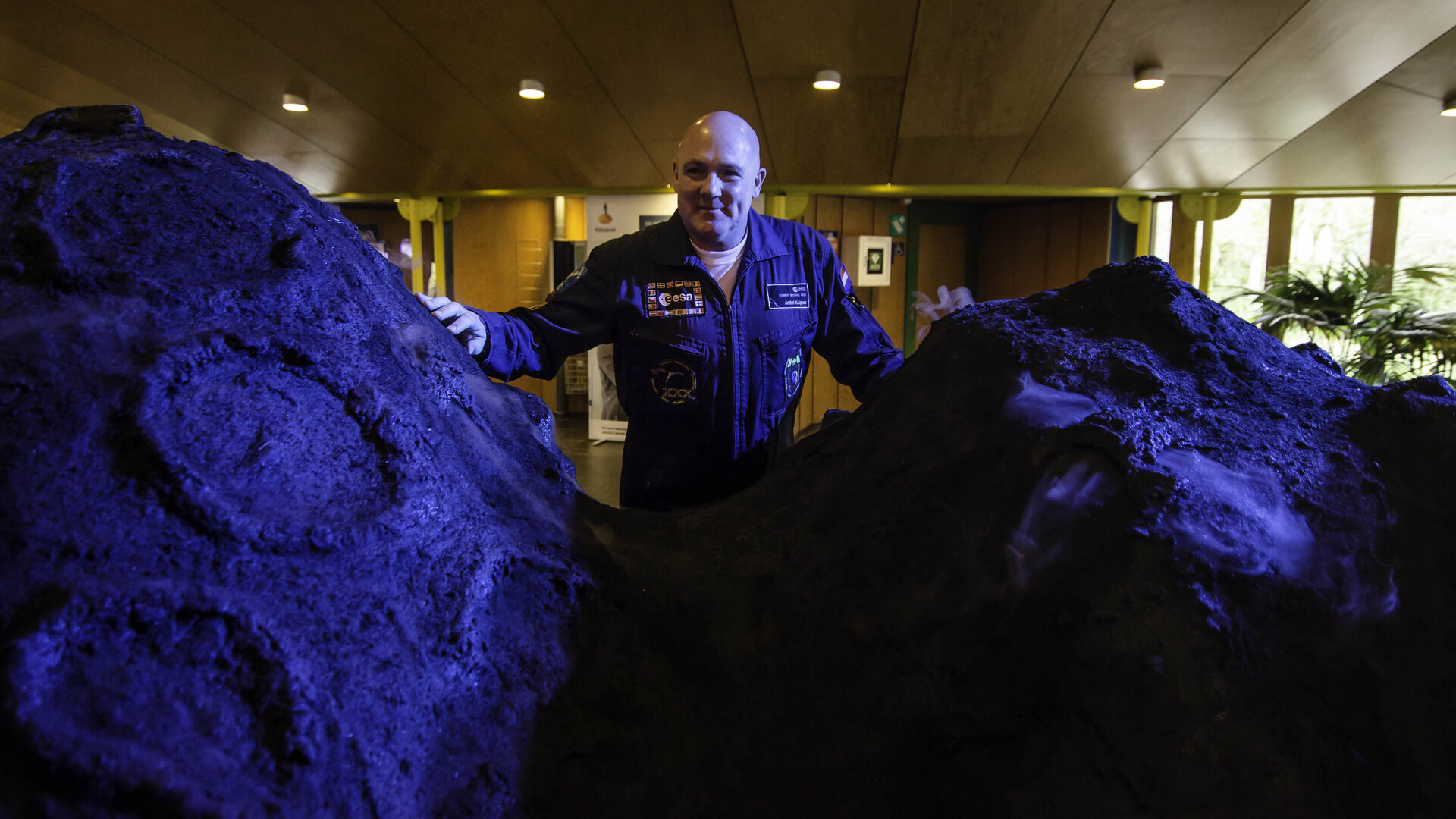 The public converged on Europe’s largest space site for Sunday’s Open Day at ESA’s technical heart. Touring across the site, they met astronauts, viewed spacecraft and inspected test facilities – and came face to face with a spectacular new world.

One of the most imposing stars of this year’s show was a 4 m-wide model of 67P/Churyumov–Gerasimenko, the strangely shaped comet that ESA’s Rosetta probe is currently orbiting and planning to land on.

Manufactured with maximum authenticity, the model was based on the latest scientific measurements from Rosetta and came complete with jets of cloudy vapour, as revealed in images streaming in from space.

The comet sat close to a scale model of Rosetta and its Philae lander. Children tried cooking their own comet with common household items, courtesy of ESA’s Rosetta team – the results ended up smoking, just like the real thing.

More than 7800 members of the public visited ESA’s Technical Centre, ESTEC, in Noordwijk, the Netherlands, over the course of the day.

A queue of people snaked much of the way down the road ready for the opening ceremony that morning.

The centre was declared officially open to the public by the Mayor of Noordwijk, Jan Pieter Lokker, and ESTEC Director Franco Ongaro and four astronauts: Italy’s first astronaut, Franco Malerba, and ESA astronauts André Kuipers, Paolo Nespoli and Alexander Gerst – who sent a video message from the International Space Station: “I hope you all have a great day looking behind the scenes of one of the most advanced centres of European technology.”

Visitors were eager to see the actual Mercury Transfer Module that will transport ESA’s BepiColombo across interplanetary space to the innermost planet, the shaker tables used to simulate rocket launch stresses, and the giant vacuum chamber, the Large Space Simulator, able to recreate space conditions for weeks at a time.

Also on show was the Large Diameter Centrifuge, an 8 m-diameter centrifuge that can be set spinning rapidly for weeks at a time, generating gravity levels of up to 20 g – several times higher than Jupiter gravity.

Put on show for the first time this year, visitors could glimpse the experimental centrifuge on the move from behind bulletproof glass, a standard safety precaution.

The NL Space tent, a new attraction sponsored by the Netherlands Space Office, showcased the work of Dutch researchers and companies in space, from sounding rockets to small CubeSats ready for orbit.

This year sees the 50th anniversary of European cooperation in space, a milestone marked by an exhibition of vintage satellite engineering models – authentic versions created for testing – of some of Europe’s earliest missions into space.

Next door, ESA’s Advanced Concepts Team looked at the next half-century, including a virtual reality roam around Mars for future space training.

Young visitors had their own ‘space for kids’, incorporating bouncy castles, robotic racing and the ESA Education stand. Several hosted talks throughout the day explained space activities from Galileo to rockets.

The trio of astronauts proved popular draws throughout the day, with the room filled to the brim for the concluding talk by André Kuipers, who went on to answer many questions from kids in the audience, who then sang heartily to him – this year’s Open Day coinciding with his birthday.

“This feels really special,” the astronaut said. “I’ve never given a birthday party with thousands of guests!”

“Until a few years ago, ESTEC was the best kept secret in the Netherlands,” commented Director Ongaro. “With this annual Open Day we’re aiming to change that for the people we serve, and show all that we do.

“But we also do it for ourselves a little bit. We see the wonder in some of our visitors’ eyes when we tell them about our work, and it gives us the energy to go for it again.”