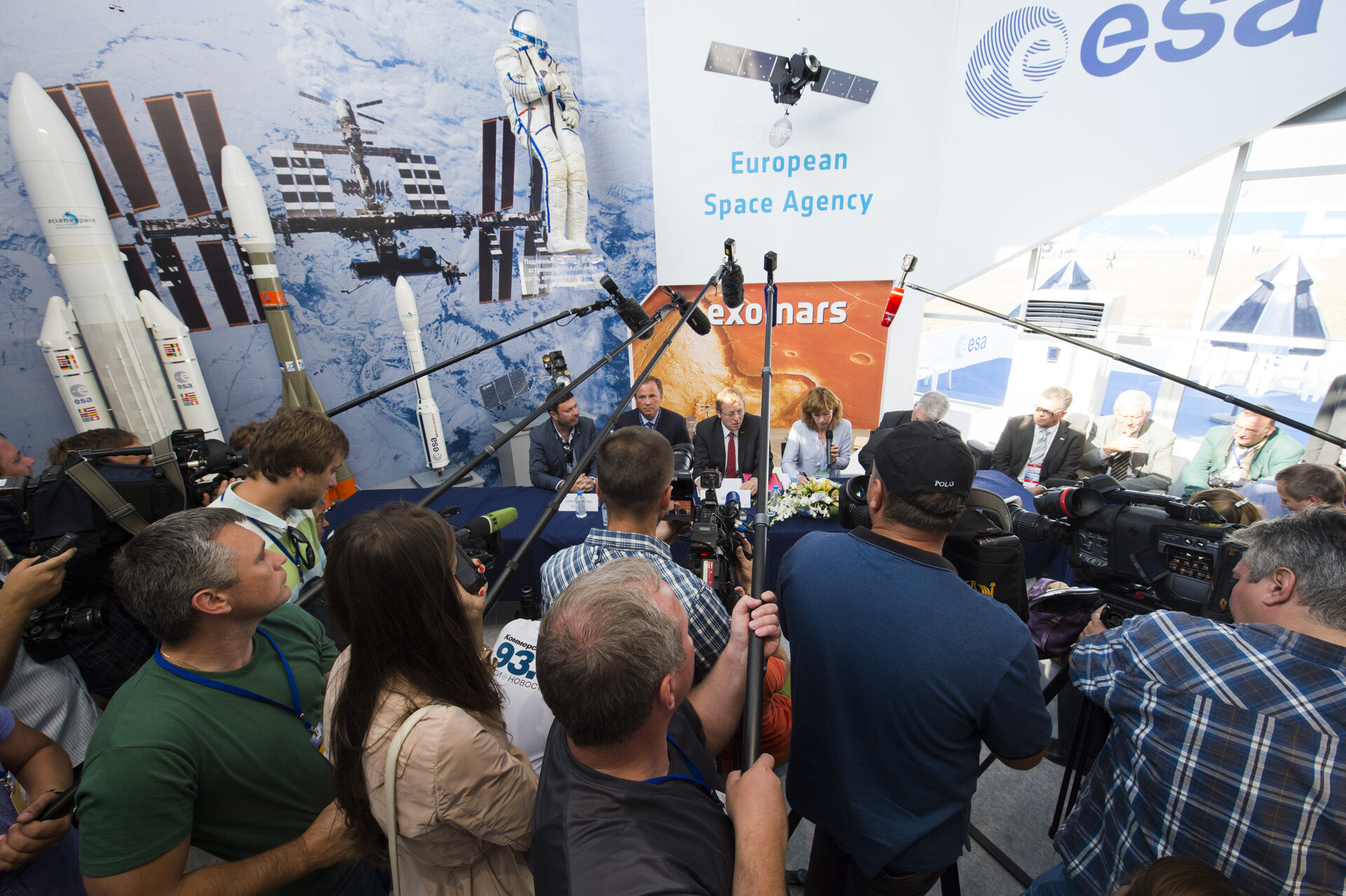 On 25–30 August, ESA is taking part in MAKS, the Russian International Aviation and Space Salon held in Zhukovsky, near Moscow.

Since the early 1990s, MAKS has become a major air show and an important networking event for the space industry. It provides insight into the progress Russia is making in space and aviation. Moreover, at MAKS the groundwork is often laid for future cooperation agreements.

Speaking of the significance of ESA’s presence at MAKS, Mr Woerner said: "Despite friction between Russia and the West, both sides continue to cooperate closely and successfully with regard to the space sector.

"There are some concerns that cooperation may be endangered by the current situation, including the Western sanctions. However, science – and especially space – can fulfil a bridging function as was already shown in 1975 with the rendezvous and docking of Soyuz and Apollo."

ESA has a two-storey chalet at the show, with a floor area of 160 sq m. Located in the exhibition’s ‘main street’, it has a patio facing the runway and is next to the pavilions of major Russian participants. The chalet is divided into a conference area, a presentation space and an exhibition floor.

The exhibition area showcases ESA programmes such as ExoMars, Ariane 5, Soyuz-ST and Vega launchers, the Sentinel family of satellites, and the Rosetta mission. Even the original space suit of ESA astronaut Alexander Gerst is on display.

A long history of cooperation

Cooperation between ESA and Russia started in the 1990s with flights of ESA astronauts – among them Thomas Reiter – to the Russian MIR station. Many milestones followed, most notably the ATV programme and the Soyuz launcher at Europe’s Spaceport in French Guiana.

Currently, the ExoMars programme and cooperation within the framework of the International Space Station programme are the most prominent activities between ESA and Roscosmos.

ExoMars represents an unprecedented interdependence of technical interfaces between the two partners. Russia will deliver the Proton launchers for the 2016 and the 2018 missions. For the 2016 Trace Gas Orbiter, Russia has already delivered two out of four science instruments. For the 2018 mission, Russia will develop, manufacture and test the Descent Module, which contains hardware and software provided by ESA. Science instruments for the surface platform (the remaining part of the Descent Module) have also been selected through a joint Announcement of Opportunity.

Major cooperation highlights are the long-term missions of ESA astronauts on the International Space Station (ISS), the latest being Samantha Cristoferetti’s Futura mission. She returned to Earth in June 2015 after spending a record 199 days in space. Andreas Mogensen will be taken to the ISS on a Soyuz rocket on 2 September.

Within the framework of the ESA-Roscosmos working group on post-ExoMars cooperation, a study for a possible future Phobos Sample Return mission has been conducted jointly and preliminary discussions held.

Opportunities for developing cooperation between ESA and Roscosmos in the area of lunar exploration are also being considered at programme and technical levels.