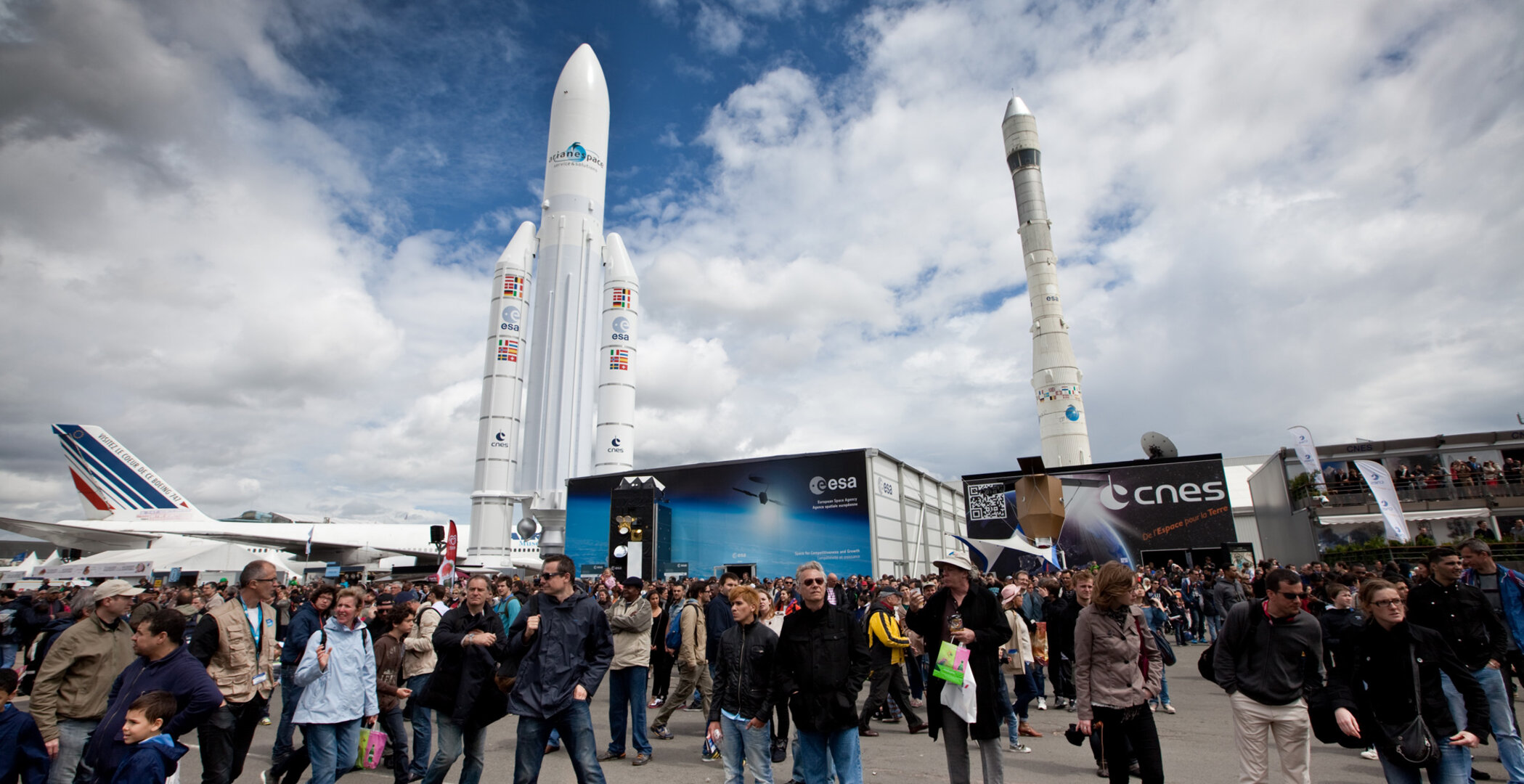 Forty years on from the signature of its convention, ESA is highlighting how its driving ambition to push the frontiers of knowledge has long been an engine for innovation and growth, producing a wealth of programmes spanning all space domains.

Rosetta was conceived back in the 1980s and in 2014 became the first spacecraft to orbit and land on a comet, after a 10-year journey of some 6500 million km.

IXV was launched on its own remarkable 100-minute journey on 11 February. Its flawless suborbital flight and safe splashdown in the Pacific Ocean tested critical reentry technologies for future European return missions.

Inside the pavilion, visitors are invited to follow the latest developments of ESA, improving our knowledge of deep space, the Solar System and our Earth, enabling services from space for everyday life and driving competitiveness and growth.

An impressive display celebrates 25 years of the NASA/ESA Hubble Space Telescope and shows how ESA’s Herschel and Planck missions are bringing important discoveries about how the Universe formed and what it is made of.

Rosetta’s rendezvous with Comet 67P/Churyumov–Gerasimenko and the success of its Philae lander occupy a central position in the pavilion, explaining how this exciting mission is key to learning more about the origins of the Solar System and life on Earth.

The ambitious ExoMars explorer, to be launched by ESA in cooperation with Russia, is displayed in a dedicated Mars landscape.

Information from ESA’s Earth Explorer satellites plays an important role in helping decision-makers to make the right choices on climate change. An interactive demonstration shows the tools being produced by ESA’s climate change office to interpret data from space.

Three ESA astronauts will live on the International Space Station in 2015 and this exhibition shows the wealth of data from the experiments they carry out during their time in space.

Technologies from ESA’s highly successful series of Automated Transfer Vehicles that delivered supplies and experiments to the Station over five flights are being adapted for NASA’s Orion crew vehicle. A scale model will be displayed in the area dedicated to ESA’s human spaceflight programme.

ESA, in close cooperation with Eumetsat, is improving weather forecasts and climate studies using the Meteosat and MetOp series.  The type of information we derive from these satellites will accompany models of the satellites.

Two Sentinel satellites for Earth observation are due for launch in the coming months. The ESA pavilion will feature models and maps of the space segment of Copernicus. An EU initiative for the benefit of Europe’s citizens, Copernicus provides accurate and timely information to manage the environment, understand and mitigate the effects of climate change, and ensure civil security.

Images from the many services will include the maps that help emergency response teams to reach areas hit by natural disasters, such as Nepal’s April earthquake.

A highlight of ESA’s telecom satellites will be EDRS-A, the first element of ESA’s European Data Relay System. Set for launch in 2015 as part of the Eutelsat-9B satellite, EDRS-A will vastly improve timely access to data acquired by satellites such as the Sentinel series. EDRS will use cutting-edge laser technology to capture information from Earth observation satellites and relay it in near-real time to the ground.

An audiovisual presentation will explain Europe’s own Galileo satnav system, with the first eight satellites now in space.

An audiovisual presentation will explain how ESA’s telecom satellites are excellent examples of innovative public–private partnerships between ESA and European industry and operators.

ESA supports the development of satellite systems and technologies, opening up new markets for European industry by sharing expertise and risk to develop operational missions.

ESA will show some of the innovative technologies being studied. These include Proba-3, the next in a series of small high-performance satellites that give promising new technologies an opportunity to fly in space.

Two exciting new missions are also featured: e.Deorbit, which will show how satellites could be removed from orbit at the end of their lives as part of ESA’s Clean Space initiative, and an Asteroid Impact Mission to look at how to deflect potentially hazardous objects.

Launchers are the second largest area of space-manufacturing activity in Europe after commercial satellites. ESA presents Ariane 6 and the new version of the Vega launcher, Vega C, both being developed.

These new rockets will enable Europe to maintain its competitiveness in the strategic and fast-moving launch sector in the coming years.

A full programme of events will be hosted in the ESA pavilion during the trade and public days: