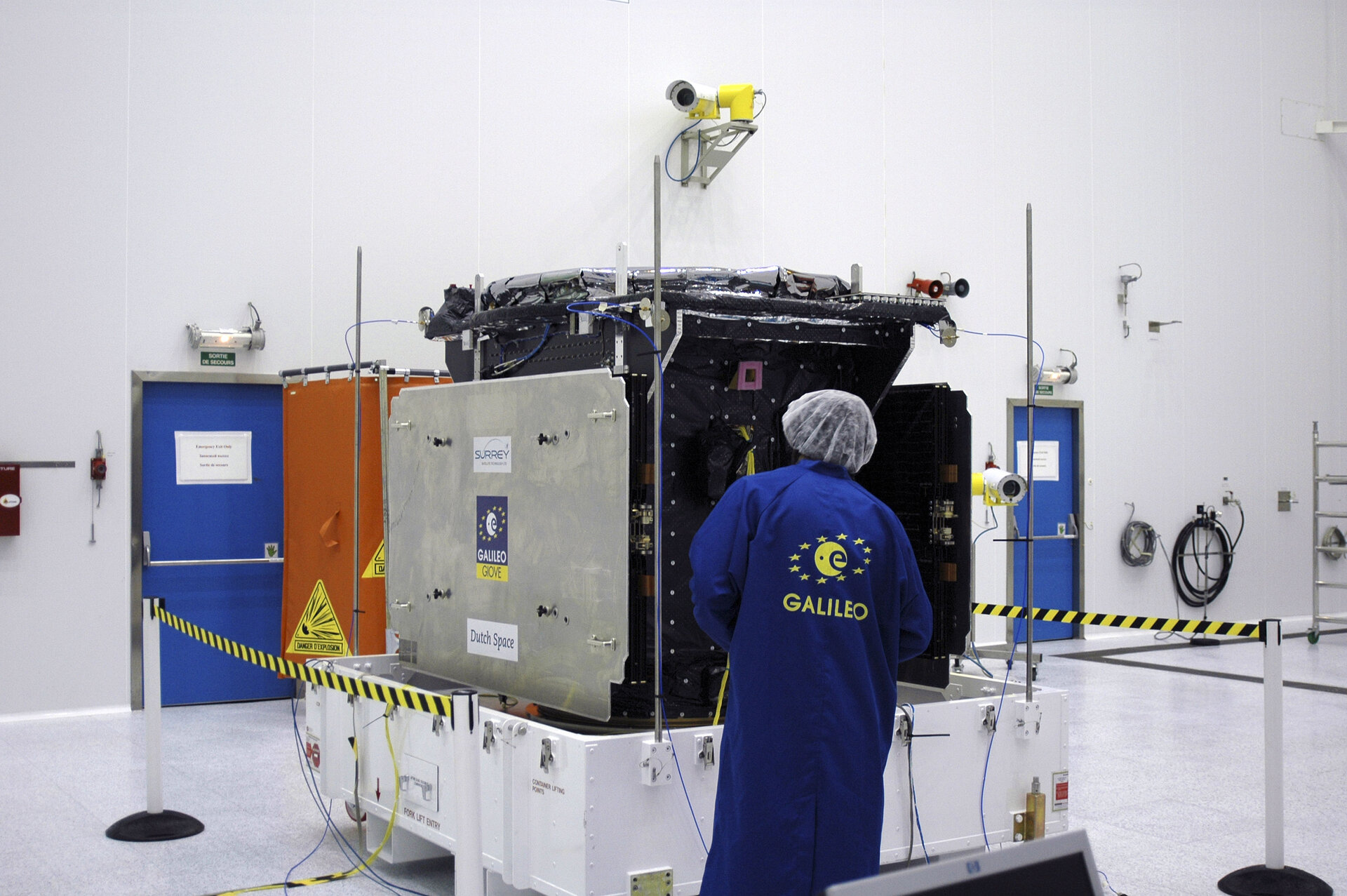 The first Galileo satellite GIOVE A is now at the Baikonur Cosmodrome in Kazakhastan preparing for a 26 December launch. GIOVE A will be placed into a medium Earth orbit at an altitude of 23 222 km by a Soyuz/Fregat launch vehicle.

GIOVE A arrived in Baikonur on 30 November from ESA’s European Space Research and Technology Centre (ESTEC) in the Netherlands, where it had been undergoing testing since August. It is now in the huge rocket test complex MIK 112, previously used for the integration of the universal rocket Energia and the Buran shuttle. Inside these gigantic halls Starsem, the European company that commercialises Soyuz, has built several clean rooms to ensure that satellite campaigns take place in conditions similar to those in the world’s best launch centres.

After unpacking, GIOVE-A was placed in the Hazardous Processing Facility where its tanks will be filled with the butane needed to propel it into space. Before this can be done however, engineers from GIOVE’s prime contractor Surrey Satellite Technology Ltd. (UK), in close cooperation with ESA experts, are carrying out a series of tests and checks to ensure the satellite is ready for launch.

After its long flight from Holland to Baikonur via Moscow, in an Antonov cargo plane, the first check was to ensure the satellite had remained undamaged during its journey. The announcement that GIOVE A was in ‘good health’ was greeted with joy and relief by all the satellite team.

GIOVE is now undergoing vigilant scrutiny at the Cosmodrome by a team of around 15 to 20 people from a number of European countries. Before the satellite can be pronounced ready for launch many tests and controls need to be carried out. These include: mechanical controls, electric tests with the power put on the satellite, checking the propulsion system and ensuring there are no leaks, and activating the atomic clocks while ensuring they always remain within a temperature range of between 16° and 22°C.

Nothing can be left to chance. Computerized checks, following pre-established procedures, are being carried out on the software that will be used to control the satellite and communicate between it and the ground segment. Every key point is checked over and over again to ensure there are no defects and that everything will run smoothly once the satellite is in space.

This is the challenge of space missions: trying to foresee all possible scenarios to ensure that nothing occurs that could endanger the mission. Not easy, since the tiniest anomaly could result in failure. The engineers now working in Baikonur on the GIOVE A launch campaign have a heavy responsibility, but are helped by teamwork, practice and years of experience.

GIOVE A is the first of two Galileo In-Orbit Validation elements. Together with GIOVE B, scheduled for launch in 2006, and their associated ground segment the two satellites will make up the first stage of the in-orbit validation of the Galileo system.