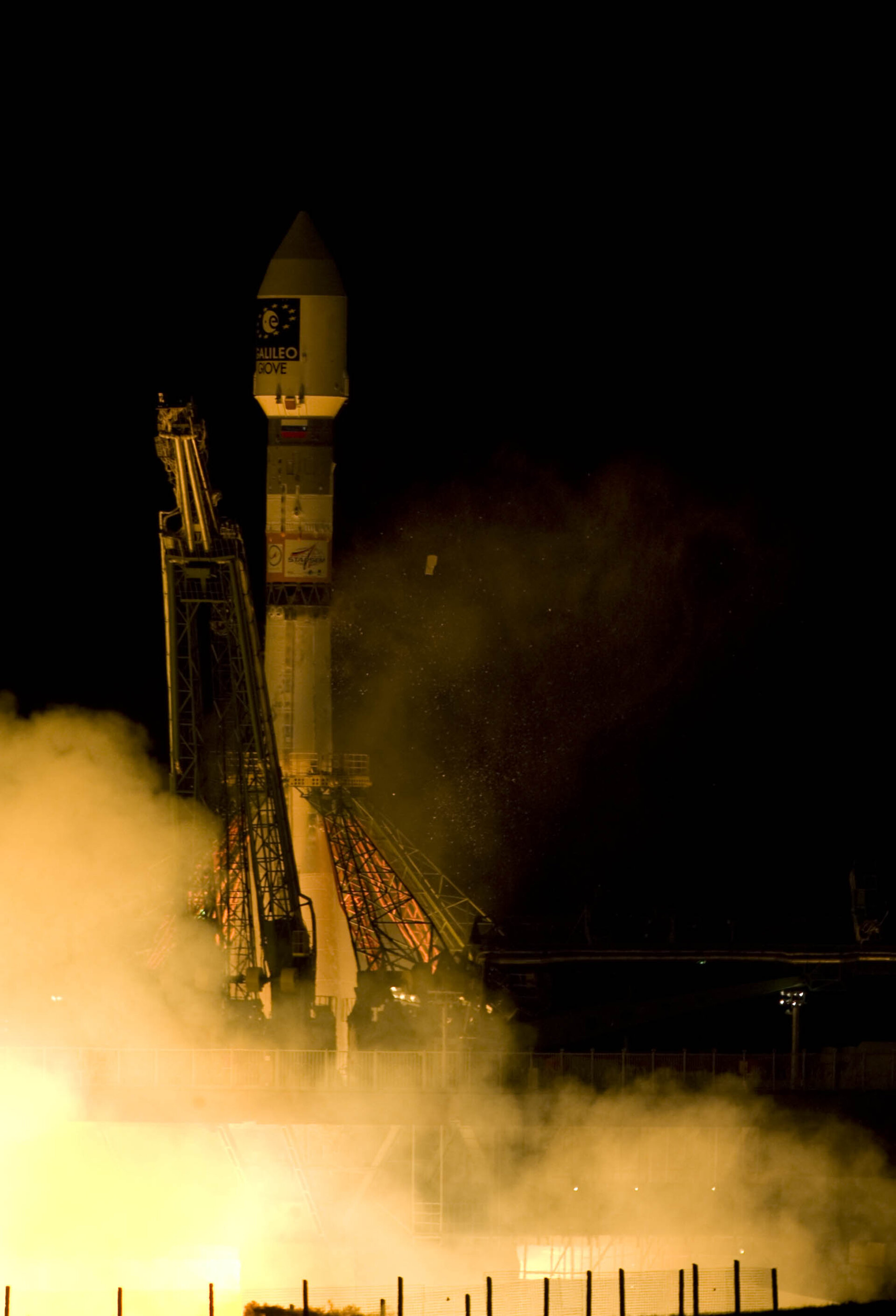 ESA PR 25-2008. A further step towards the deployment of Europe's Galileo global navigation satellite system was made with the launch of ESA's second Galileo In-Orbit Validation Element satellite, carrying the most accurate atomic clock ever flown into space.

The satellite was lofted into a medium altitude orbit around the earth by a Soyuz/Fregat rocket departing from the Baikonur cosmodrome in Kazakhstan by launch operator Starsem. Lift-off occurred at 04:16 local time on 27 April (00:16 Central European Summer Time). The Fregat upper stage performed a series of manoeuvres to reach a circular orbit at an altitude of about 23 200 km, inclined at 56 degrees to the Equator, before safely delivering the satellite into orbit some 3 hours and 45 minutes later. The two solar panels that generate electricity to power the spacecraft deployed correctly and were fully operational by 05:28 CEST.

This 500 kg satellite was built by a European industrial team led by Astrium GmbH, with Thales Alenia Space performing integration and testing in Rome. Two years after the highly successful mission, this latest satellite will continue the demonstration of critical technologies for the navigation payload of future operational Galileo satellites.

Like its predecessor, carries two redundant small-size rubidium atomic clocks, each with a stability of 10 nanoseconds per day. But it also features an even more accurate payload: the Passive Hydrogen Maser (PHM), with stability better than 1 nanosecond per day. The first of its kind ever to be launched into space, this is now the most stable clock operating in earth orbit. Two PHMs will be used as primary clocks onboard operational Galileo satellites, with two rubidium clocks serving as back-up.

GIOVE-B also incorporates a radiation-monitoring payload to characterise the space environment at the altitude of the Galileo constellation, as well as a laser retroreflector for high-accuracy laser ranging.

The satellite is now under the control of Telespazio's spacecraft operations centre in Fucino, Italy, and in-orbit checking-out of the satellite has begun.

In addition to its technology-demonstration mission, will also take over mission to secure the Galileo frequencies, as that first Galileo demonstration satellite launched in December 2005 is now approaching the end of its operational life.

Beyond the next step in the Galileo programme will be the launch of four operational satellites, to validate the basic Galileo space and related ground segment, by 2010. Once that In-Orbit Validation (IOV) phase is completed, the remaining satellites will be launched and deployed to reach the Full Operational Capability (FOC), a constellation of 30 identical satellites.

“With the successful launch of we are about to complete the demonstration phase for Galileo ”, said ESA Director General Jean Jacques Dordain in Fucino while congratulating the ESA and industrial teams. “The strong cooperation between ESA and the European Commission has been instrumental in making progress in a difficult environment over the past few years; and, even with that being so, Galileo has already materialised, with two satellites now in orbit, significant headway made on the next four (already in the construction phase) and a fully qualified EGNOS service (*) - all this designed to serve citizens in Europe and all around the globe. ESA will begin shortly the procurement process for the overall constellation beyond IOV under EC responsibility.”

Galileo will be Europe's very own global navigation satellite system, providing a highly accurate, guaranteed global positioning service under civil control. It will be interoperable with the US Global Positioning System (GPS) and Russia's GLONASS, the two other global satellite navigation systems. Galileo will deliver real-time positioning accuracy down to the metre range with unrivalled integrity.

(*) Note for Editors: European Geostationary Navigation Overlay Service. EGNOS is a joint programme being carried out by the European Space Agency, the European Commission and Eurocontrol. It comprises a network of more than forty elements all over Europe that collect, record, correct and improve data from the US Global Positioning System. The modified signals are then relayed via geostationary satellites to user terminals, offering positional accuracy better than two metres, compared with 15 to 20 metres for GPS alone. In addition, EGNOS provides a guarantee of signal quality that GPS does not.