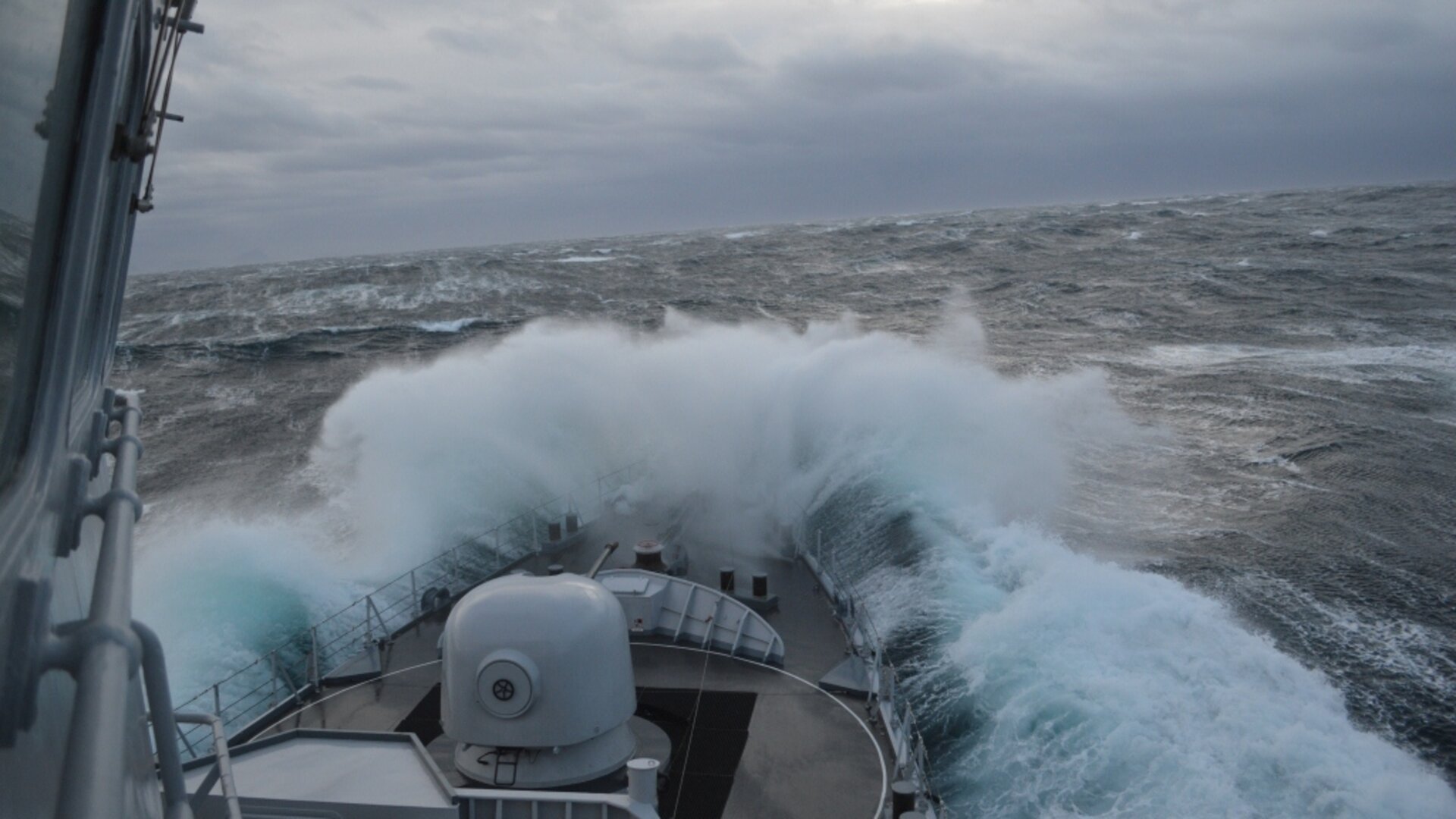 Results are being processed from the first Galileo maritime trials outside of mainland Europe. The long-range, high-latitude testing spanned the North Sea, following the same historical sailing route that Viking dragon-ships used 1200 years ago.

Ancient manuscripts record Viking navigators relied on ‘sunstones’ to find their way – archaeologists believe these may have been polarising crystals to pinpoint the Sun even in overcast skies.

“This means we are engaging in all kinds of experimental demonstrations of all Galileo services, in particular PRS, which offers the most highly accurate positioning and timing performance, but with access strictly restricted to authorised users.”

The frigate sailed first from the Dutch marine base of Den Helder on 4 December 2013 to Stavanger in Norway. From there it progressed north in very rough seas with 10 m-high waves, coming close to the Arctic circle on 17 December – a first for Galileo PRS observations – before heading home.

The testing provided tangible in-situ evidence of Galileo signal stability across both its operating frequencies up at high latitudes, equalling low satellite elevations in the local sky.

Following the completion of earlier road, then flight, testing last summer and autumn, the last challenge for Galileo’s IOV phase was to engage in a long-term maritime trial into high latitudes.

The testing was performed as part of the ‘PRS Participants to IOV’ project jointly managed by ESA and the European Commission, in collaboration with the European GNSS Office Agency and several Member States possessing PRS test receiver technology.

The trials were performed by the Royal Military Academy of the Belgian Ministry of Defence, the UK Space Agency in collaboration with satnav-specialist company Nottingham Scientific Ltd and ESA, serving to ensure PRS signals were available whenever the four Galileo satellites currently in orbit came into view.

A dual test setup was fitted to the frigate at Den Helder. Belgium connected a PRS receiver and an OS receiver, both manufactured in Belgium by Septentrio NV, to a common antenna. The PRS receiver recorded raw PRS measurements on both frequencies while the OS receiver logged data from openly available Galileo, GPS and Glonass signals at one-second intervals.

“As this was a first use of PRS equipment outside EU borders, the security issues were quite challenging,” notes Bruno Vermeire, head of the Belgium Competent PRS Authority (Federal Public Service of Foreign Affairs).

“Several partners from different countries and industries were involved. At all times the necessary security was assured, though this could not have been possible without the dedicated joint commitment of all partners.”

David Parker, head of the UK Space Agency, comments: “This test is a significant milestone on the road to demonstrating early PRS capability across a range of platforms.

“It should serve as a model for wider international collaboration between national governments and industry to prove and demonstrate PRS in different applications.”

Alain Muls, Professor of the Royal Military Academy of Belgium, faced the challenge of coordinating the maritime trial without interfering with the normal operations of the frigate: “Thanks to the cooperation of with the Maritime Component of the Belgium Defence, in particular that of the frigate’s commander and crew, preliminary results look very promising.

“Reception of Galileo’s OS and PRS navigation services have been practically demonstrated under severe maritime conditions with waves of up to 10 m in height.”

Mark Dumville, Nottingham Scientific General Manager, adds: “This activity is a truly collaborative effort at all levels. The trial involved UK and Belgian governments and industry partners with support from different European bodies as well as officials from the Netherlands and Norway.

“This team effort has enabled the concept of radio-frequency sampling processing of Galileo PRS signals to be tested in real-world operational environments. We have confirmed that the prototype receiver is now ready to support European governments and associated PRS applications.”

The collaborative nature of this trial was formally recognised as the Leopold I-F930 reached Stavenger. Under the supervision of Belgium’s CPA, Jochen Devadder, the country’s Ambassador to Norway Michel Godfrind provided a Norwegian delegation with details of the testing.

Results from the trial will guide future Galileo developments for years to come.