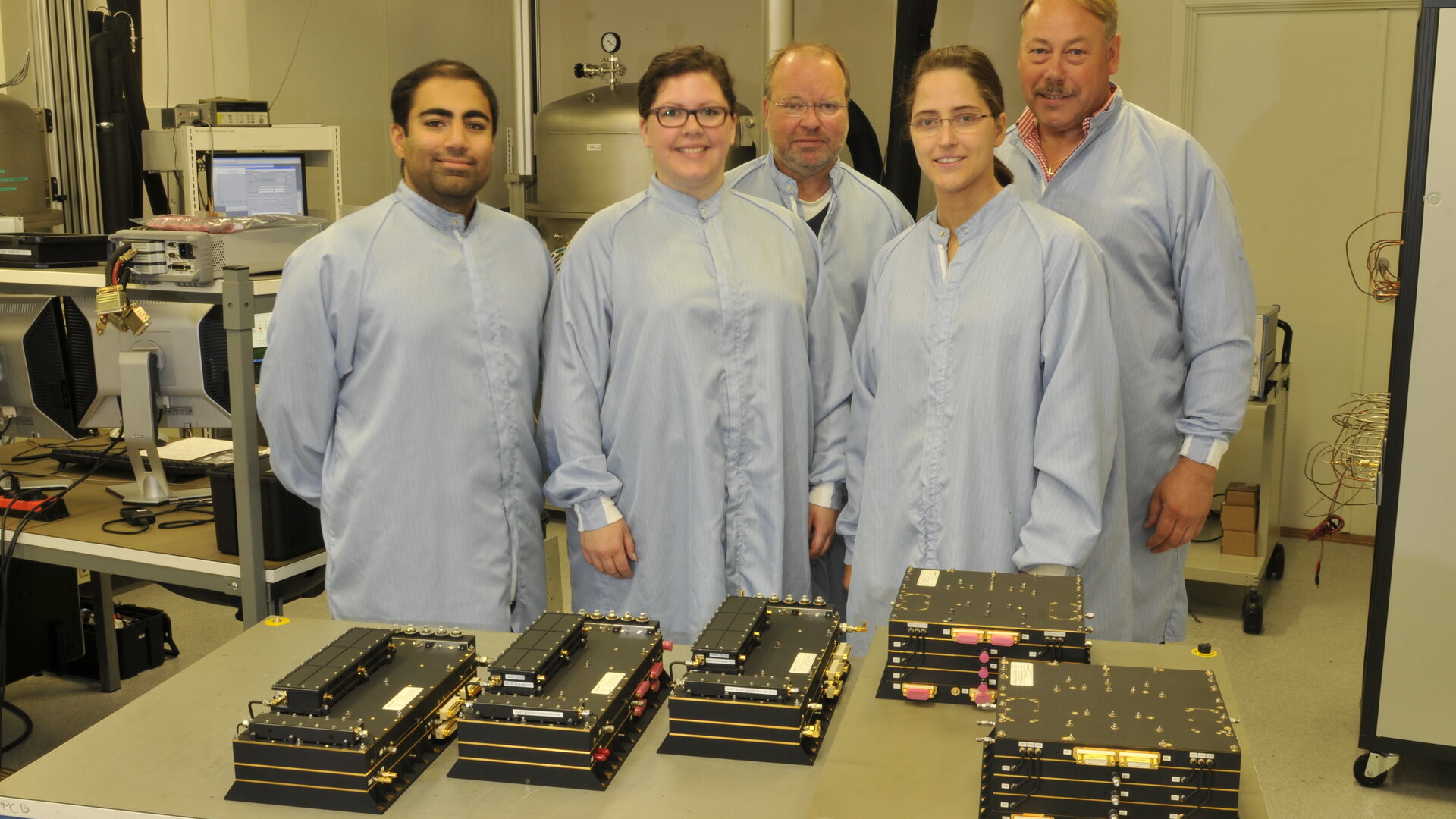 A trans-European production line is progressively transforming the Galileo satnav system into a working reality. The 22 satellites so far contracted to join the four already in orbit are having their payloads manufactured at Surrey Satellite Technology Ltd in the UK, which are then integrated to their satellite platforms at OHB in Germany. Finally, each complete satellite is tested at ESTEC in the Netherlands for launch from Europe’s Spaceport in French Guiana.

And this main manufacturing process is fed by smaller but no less crucial production lines all across the continent, run by specialised companies supplying essential building blocks to Galileo’s prime contractors.

“We won the contracts to supply the Frequency Generator and Upconverter Units (FGUUs) and Search and Rescue Transponders (SARTs) for all the Galileo FOC satellites,” explains Sverre Bisgaard, CEO of Kongsberg Norspace.

The shoebox-sized FGUU is a pivotal item of equipment, effectively giving Galileo its voice: “It takes the outputs of the satellite’s adjacent Navigation Signal Generator Unit and converts them into L-band signals across Galileo’s three spectral bands. It is these signals that end up guiding Galileo users through their receivers.

“These signals end up being very low power by the time they reach the ground, so maintaining the signal quality is key, in terms of power range, frequency shape and low noise. The FGUU actually relies on Galileo’s atomic clocks to keep accurately locked on its set frequency. It also actively determines which of the clocks and other redundant subsystems it should employ at any one time for optimal operations.”

Kongsberg Norspace’s second, similarly sized contribution is the SART, which picks up emergency distress calls from the ground or sea and relays them to the nearest rescue centre, while also sending a return-link message that help is on the way. Galileo’s search and rescue capability marks a significant enlargement of the international Cospas–Sarsat system, which has been active for more than three decades and rescued thousands of lives.

“The SART’s job as a transponder is just to relay messages, theoretically a simple task but requiring clever design to make it work,” adds Mr Bisgaard. “The SART is operating across noisy frequencies, and has to recognise, filter and amplify the very weak messages in question without missing anything.

“So both FGUU and SART have a need for effective filtering in common, to ensure that they are processing the right frequencies with the right signal shape without any garbling. This filtering is performed physically, based on ‘Surface Acoustic Wave’ (SAW) technology.

“SAW makes use of the physical effect called ‘piezoelectricity’ – if an electrical field is applied to quartz it is converted to a mechanical or acoustic wave. By converting our electrical signal in this way then converting it back again the signal can be filtered and shaped as desired. This is one of our key technologies and in fact ESA recognises us as a preferred supplier for SAW systems.”

While the FGUU has embedded redundancy and the SART is a non-redundant unit, one of each design is being supplied for each Galileo satellite, a total of 44. Batch production is a shift from how the space industry traditionally operated, with bespoke designs for each individual satellite, but Kongsberg Norspace has had a lot of experience working in such a way.

“We’ve had similar series contracts in the past, for instance contributing 48 identical units to five satellites of the Russian Express-AM series and up to 12 units per satellite for the 64-satellite Globalstar low-Earth orbit telecom constellation.

“We’ve already delivered units to SSTL for the first 14 satellites, which was the first contract won, with the next eight in production. It is SSTL who set the technical requirements and give us information on the interfaces with the other items of equipment, such as the clocks and navigation signal generator unit. We deliver directly to SSTL where the integration is performed.”

Norspace has been doing business for just under three decades, originally formed as a subsidiary of another company before being spun out. In 1986 it won its first ESA contract, supplying systems for the Agency’s ERS-1 remote sensing missions, subsequently diversifying into the US telecommunications market under the ownership of Alcatel.

A decade ago a management takeover took place, with the company bought by Kongsberg in 2011. Upwards of 150 satellites rely on hardware supplied by the company.

“Telecom missions remain an important part of our business, but Galileo is becoming more important – it represented 40% of our sales during the last couple of years.

“We have been involved with Galileo since the start, supplying equipment for the initial testbed systems, then the GIOVE-A and -B test satellites and the initial In-Orbit Validation quartet of satellites. We hope to maintain our involvement into the future as Galileo evolves, so we are discussing about joining with primes to prepare for future bids.”