Scientists using data from the Copernicus Sentinel-5P satellite have noticed a strong reduction of ozone concentrations over the Arctic. Unusual atmospheric conditions, including freezing temperatures in the stratosphere, have led ozone levels to plummet – causing a ‘mini-hole’ in the ozone layer.

The ozone layer is a natural, protective layer of gas in the stratosphere that shields life from the Sun’s harmful ultraviolet radiation – which is associated with skin cancer and cataracts, as well as other environmental issues.

The ‘ozone hole’ most commonly referenced is the hole over Antarctica, forming each year during autumn.

In the past weeks, scientists from the German Aerospace Center (DLR) have noticed the unusually strong depletion of ozone over the northern polar regions. Using data from the Tropomi instrument on the Copernicus Sentinel-5P satellite, they were able to monitor this Arctic ozone hole form in the atmosphere. 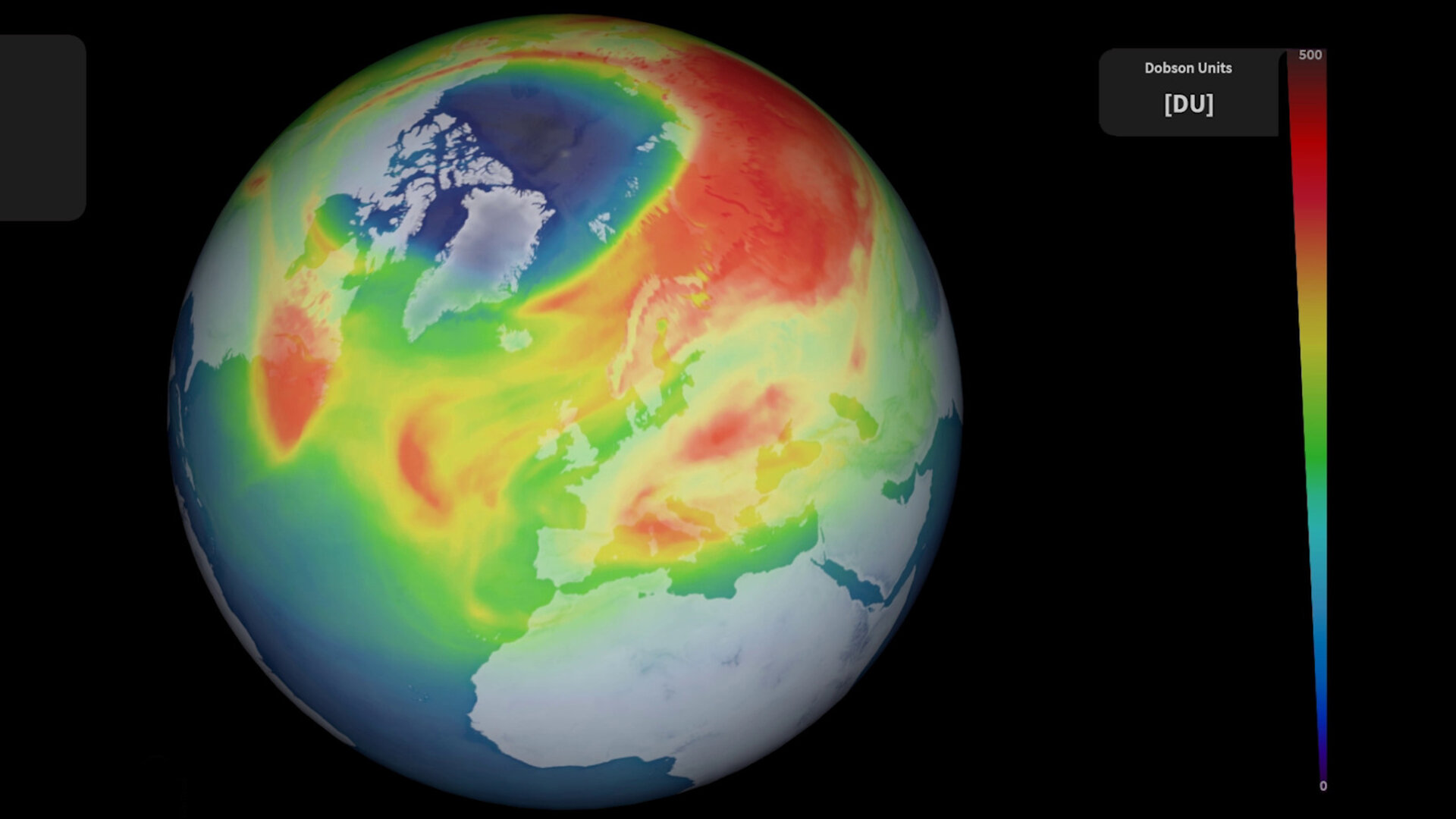 In the past, mini ozone holes have occasionally been spotted over the North Pole, but the depletion over the Arctic this year is much larger compared to previous years.

Diego Loyola, from the German Aerospace Center, comments, “The ozone hole we observe over the Arctic this year has a maximum extension of less than 1 million sq km. This is small compared to the Antarctic hole, which can reach a size of around 20 to 25 million sq km with a normal duration of around 3 to 4 months.”

Even though both poles endure ozone losses during winter, the Arctic’s ozone depletion tends to be significantly less than Antarctica. The ozone hole is driven by extremely cold temperatures (below -80°C), sunlight, wind fields and substances such as chlorofluorocarbons (CFCs).

Arctic temperatures do not usually plummet as low as in Antarctica. However, this year, powerful winds flowing around the North Pole trapped cold air within what is known as the ‘polar vortex’ – a circling whirlpool of stratospheric winds.

By the end of the polar winter, the first sunlight over the North Pole initiated this unusually strong ozone depletion – causing the hole to form. However, its size is still small compared to what can usually be observed in the southern hemisphere.

Diego says, “Since 14 March, the ozone columns over the Arctic have decreased to what is normally considered ‘ozone hole levels,’ which are less than 220 Dobson Units. We expect the hole to close again during mid-April 2020.”

Claus Zehner, ESA’s Copernicus Sentinel-5P mission manager, adds, “The Tropomi total ozone measurements are extending Europe’s capability of the continuous global ozone monitoring from space since 1995. In this time, we have not witnessed an ozone hole formation of this size over the Arctic.”

In the 2018 Scientific Assessment of Ozone Depletion, data shows that the ozone layer in parts of the stratosphere has recovered at a rate of 1-3% per decade since 2000. At these projected rates, the Northern Hemisphere and mid-latitude ozone is predicted to recover by around 2030, followed by the Southern Hemisphere around 2050, and polar regions by 2060.

The Tropomi instrument on the Copernicus Sentinel-5P satellite measures a number of trace gases, including aerosol and cloud properties with a global coverage on a daily basis. Given the importance of monitoring air quality and global ozone distribution, the upcoming Copernicus Sentinel-4 and Sentinel-5 missions will monitor key air quality trace gases, stratospheric ozone, and aerosols. As part of the EU’s Copernicus programme, the missions will provide information on air quality, solar radiation and climate monitoring.