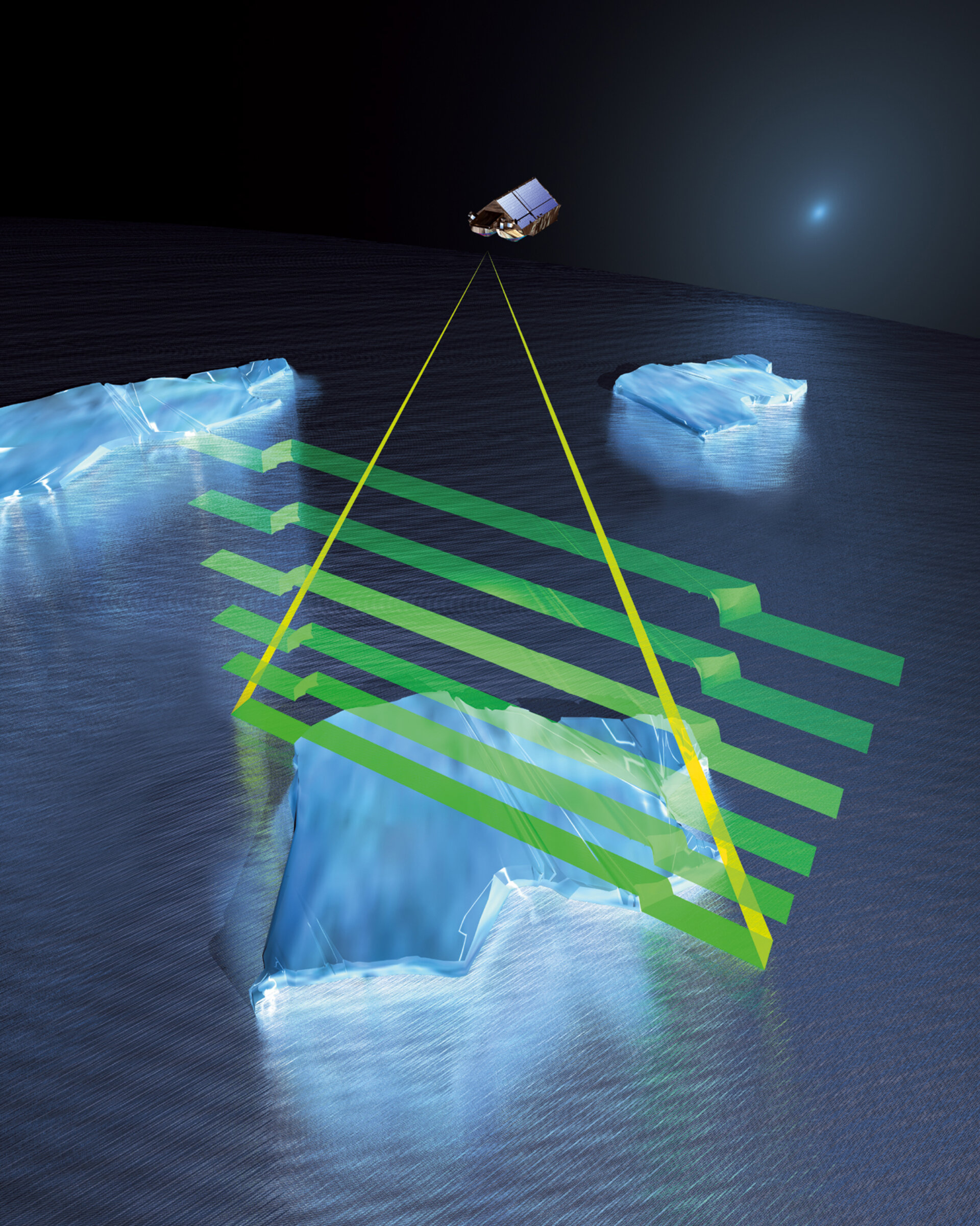 CryoSat’s primary instrument is the Synthetic Aperture Interferometric Radar Altimeter (SIRAL). It was designed to meet the measurement requirements for ice-sheet elevation and sea-ice freeboard, which is the height of ice protruding from the water.

Conventional radar altimeters send pulses at intervals long enough that the echoes are uncorrelated; many such echoes can be averaged to reduce noise. At the typical satellite orbital speed of 7 km/s, the interval between pulses is about 500 microseconds.

However, the CryoSat altimeter sends a burst of pulses at an interval of only about 50 microseconds. The returning echoes are correlated and, by treating the whole burst together, the data processor can separate the echo into strips arranged across the track by exploiting the slight frequency shifts, caused by the Doppler effect, in the forward- and aft-looking parts of the beam.

Each strip is about 250 m wide and the interval between bursts is arranged so that the satellite moves forward by 250 m each time. The strips laid down by successive bursts can therefore be superimposed on each other and averaged to reduce noise. This mode of operation is known as the Synthetic Aperture Radar – or SAR – mode.

In order to measure the arrival angle, a second antenna receives the radar echo simultaneously. When the echo comes from a point not directly beneath the satellite, there is a difference in the path-length of the radar wave, which is measured.

Simple geometry then provides the angle between the 'baseline', joining the antennas and the echo direction.

In addition to the altimeter, knowledge of the precise orientation of the baseline of the two receiving antennas is essential. CryoSat measures this baseline orientation using the oldest and most accurate of references: the position of the stars in the sky.

Three star trackers mounted on the antenna support structure each takes five pictures per second. The images are analysed by the star trackers’ built-in computers and compared to a catalogue of star positions.

The orbital position of altimetry satellites can be determined to within a few centimetres. To do this, CryoSat carries two devices: a radio receiver and a laser retroreflector.

The Doppler Orbit and Radio Positioning Integration by Satellite (DORIS) radio receiver detects and measures the Doppler shift on signals broadcast from a network of more than 50 radio beacons around the world. Although the full accuracy of this system is obtained only after ground processing, DORIS provides a real-time estimate on board. The DORIS system has been operating for more than a decade, and is used on many satellites.

A small laser retroreflector is attached to the underside of CryoSat. This little device has seven optical corner cubes, which reflect light in exactly the direction it came from. A global network of laser tracking stations fires short laser pulses at the satellite and times the interval before the pulse arrives back – providing independent reference measurements of its position.

These stations are relatively few but, because their positions are very accurately known from their routine work of tracking geodetic satellites, they provide a set of independent reference measurements of CryoSat’s position.