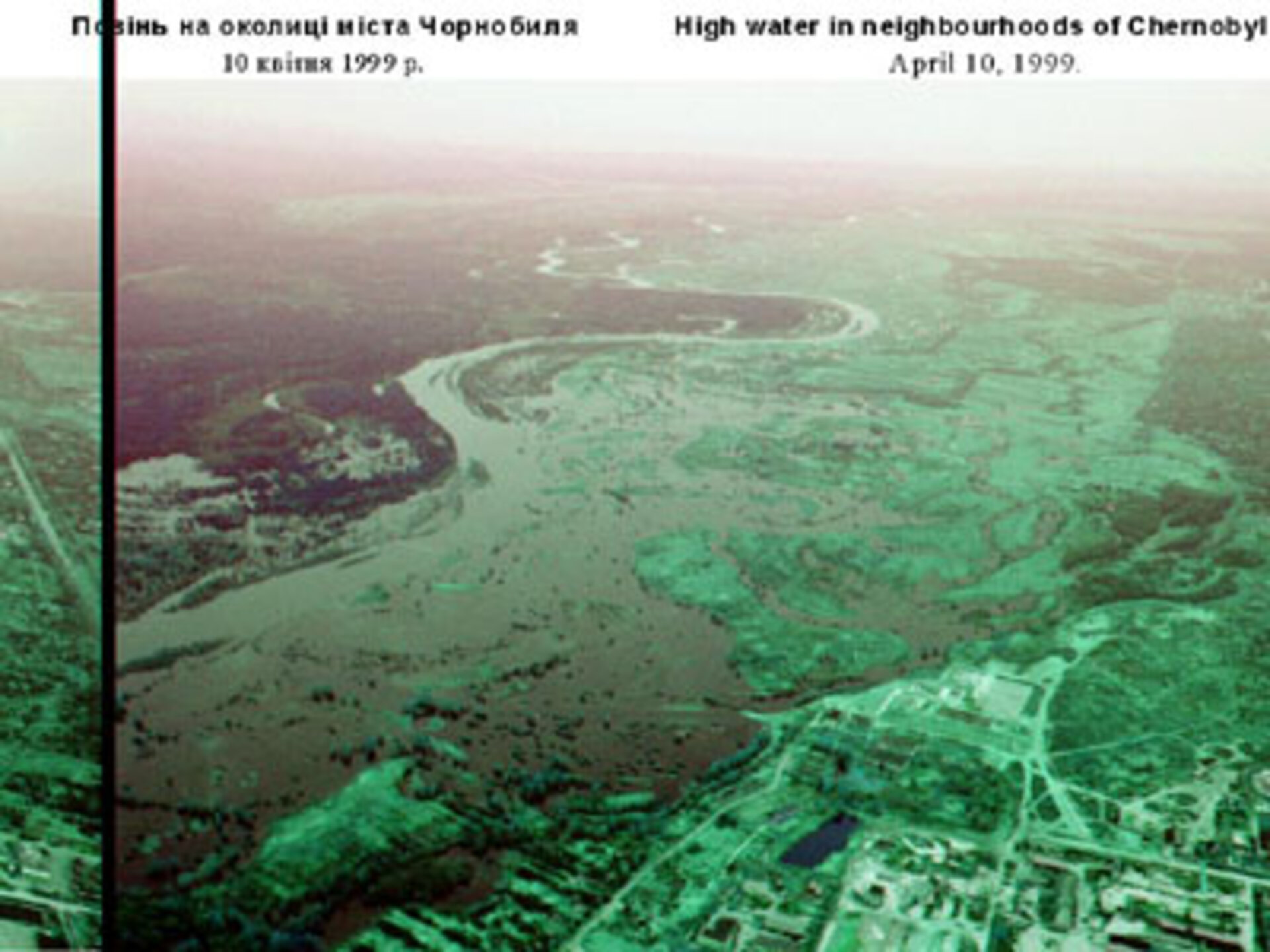 Chernobyl is a nuclear hot spot. Radioactive dust covers the area around the nuclear plant which exploded in 1986, and debris from the clean-up is isolated in earthen bunkers. The contamination still spreads, however, carried by water toward the nearby Pripyat and Dnieper rivers. Presenting their results at the ERS - Envisat Symposium, organised by the Europan Space Agency (ESA) in Gothenburg, Ukrainian scientists explained how they are using ESA satellite images to monitor flooding which threatens the 10 million people living in the Dnieper basin with radioactive contamination.

The area around Chernobyl is regularly threatened by Spring floods, as the snows of the winter melt and water rushes through hundreds of tributaries towards the two great rivers. In the years after the disaster, Ukrainian scientists developed a hydrographic model of the area around the damaged plant, which provided some warning of impending flooding. But as Alexey Ischuk of ECOMM in Kiev explains "There have been large changes in the hydrological system over the years, through deforestation on slopes and man-made alterations to riverbeds. These changes will change the speed and depth of the flooding significantly."

The radioactive no-go area around Chernobyl established in 1986 was expanded in 1997 to encompass about 2500 sq. km, and it is estimated that this zone contains over 21 million Curies of radiation. "The main way the radioactivity is carried out of the zone is by underground water and by surface washing into the Pripyat riverbed and further to the Dnieper," explains Ischuk, "but it is estimated that the underground water will take 50 years to reach the river, while the pollution from flooded areas and the isolated reservoirs can be washed into the river in a few days as the floods recede. That’s why an evaluation of the flood areas using remote sensing data and GIS is the most important problem facing Chernobyl zone researchers."

In early April 1999, the Pripyat River reached unexpectedly high levels, bursting its banks and inundating over 10 sq. km. around the Chernobyl plant. ECOMM and INFOCenter Chernobyl had modelled the expected flooding, and identified the most dangerous place, where overflow of a dam containing contaminated waste would carry radiation directly into the Pripyat.

To validate their modelling, the Ukrainian team turned to ESA. ESA’s ERS-2 satellite, launched in 1995, gathers remote sensing data on global scale. The satellite, as well as its successor Envisat, which is due for launch in mid-2001, carries a Synthetic Aperture Radar (SAR) among other instruments. ERS-2 had obtained a SAR image of the area on 5 April. SAR images show flooded areas very clearly, since the distinctive "signature" of reflection from water is very different from land and vegetation. Comparing the actual flooded areas visible in the SAR image with the predictions of their hydrographic model, Ischuk and the team were able to refine their model, and make predictions of the amount of radiation released by the floods. According to Ischuk, further work is still needed - for example, to derive a higher resolution digital elevation model of the basin using SAR interferometry techniques. Even so, he says, "We have improved our models considerably, and using the radar images has been a very important addition to the methods and techniques we can use to help understand, and eventually solve, this very difficult problem."