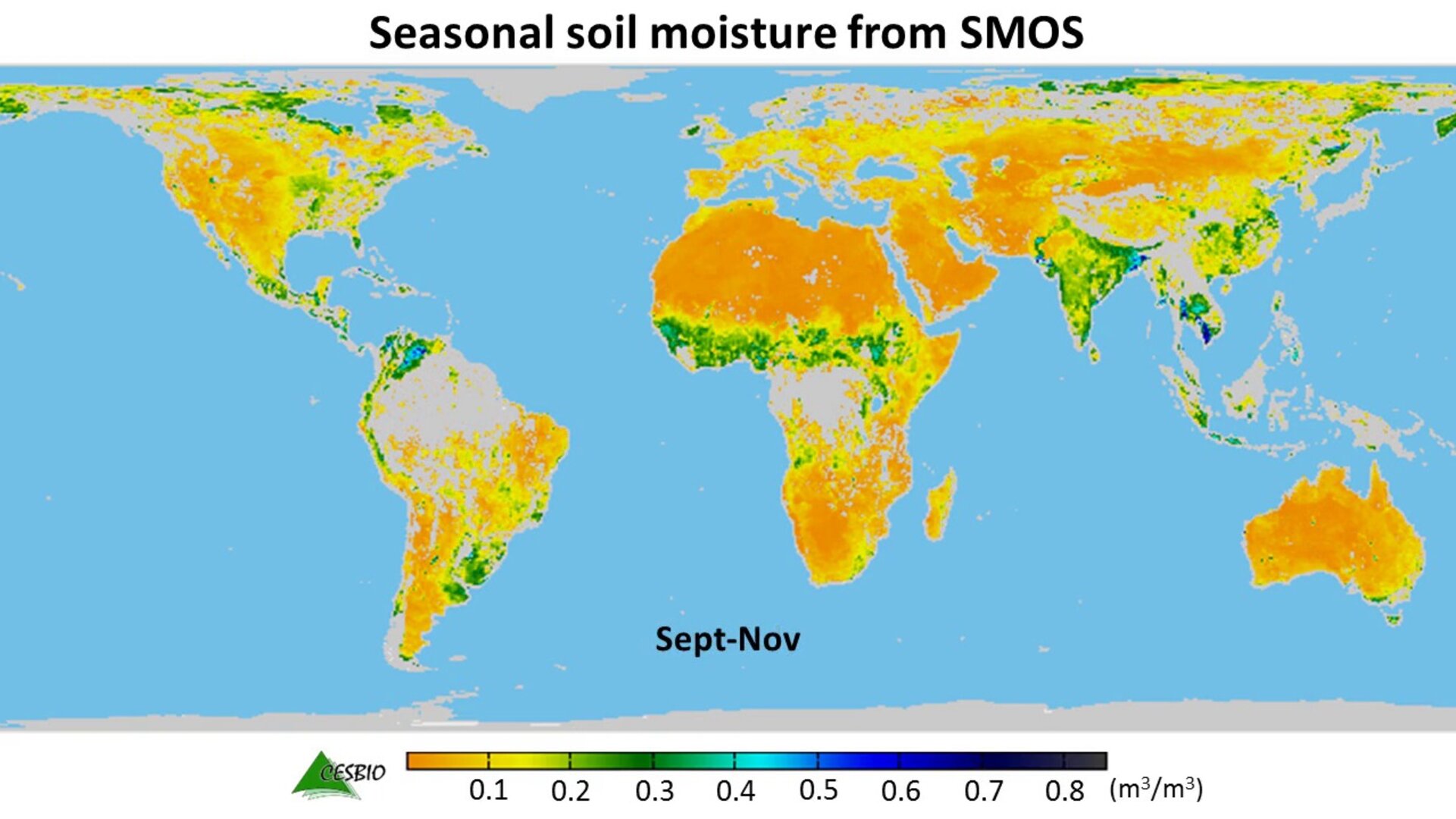 ESA’s SMOS satellite has clocked up more than one billion kilometres orbiting Earth to improve our understanding of our planet’s water cycle. Marking its fifth birthday, all the data collected over land and ocean have been drawn together to show how moisture in the soil and salinity in the ocean change over the year.

The Earth Explorer SMOS mission was launched on 2 November 2009 from Plesetsk in Russia.

Carrying a novel sensor, it captures images of ‘brightness temperature’. These images correspond to microwave radiation emitted from Earth’s surface and can be related to soil moisture and ocean salinity – two key variables in Earth’s water cycle.

The animation above uses five years of SMOS data to show how, on average, moisture in the soil changes with the seasons around the world.

It illustrates how change is more pronounced at higher latitudes, but monsoon dynamics in the Indian subcontinent are also clearly visible. The ‘Sahel transition’ region in Africa is well depicted and seasonal flooding in regions such as La Plata in Argentina and the Orinoco Basin in Veneuzela can also be seen. 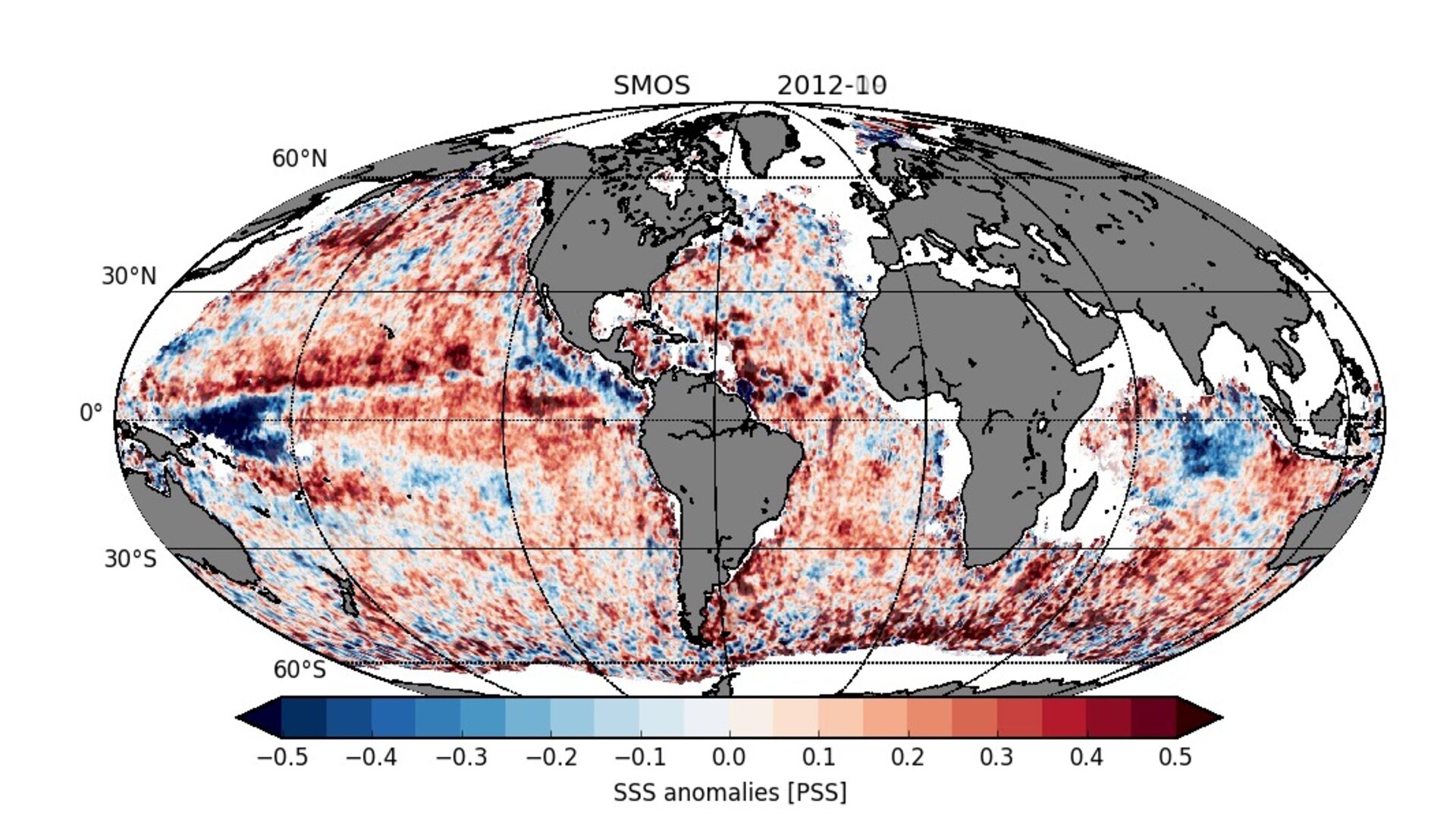 Over oceans, measurements from SMOS, the longest continuous record from space, show monthly differences in sea-surface salinity with respect to the average salinity – and show large deviations in the tropical Pacific Ocean and in the Indian Ocean.

While these results are of interest to understanding aspects of the water cycle, information from SMOS is being used for a number of practical applications.

In fact, 18 TB of SMOS data are distributed every year, of which around 13 TB are used by scientists and around 5 TB for near-realtime applications by operational users.

This is particularly true for the southern hemisphere, where the number of conventional in situ observations is comparably low. In fact, ECMWF is processing and quality-controlling SMOS data operationally to realise some 600 images every day, totalling more than one million figures since the satellite was launched.

While it wasn’t designed to measure ice, radiation emitted by the ice allows SMOS to ‘see’ through the surface, yielding ice-thickness measurements down to 50 cm – mainly the thinner younger ice at the edge of the Arctic Ocean.

Sea ice that is less than 50 cm thick is particularly important for weather and climate because it controls the exchange of heat and water between the ocean and atmosphere. 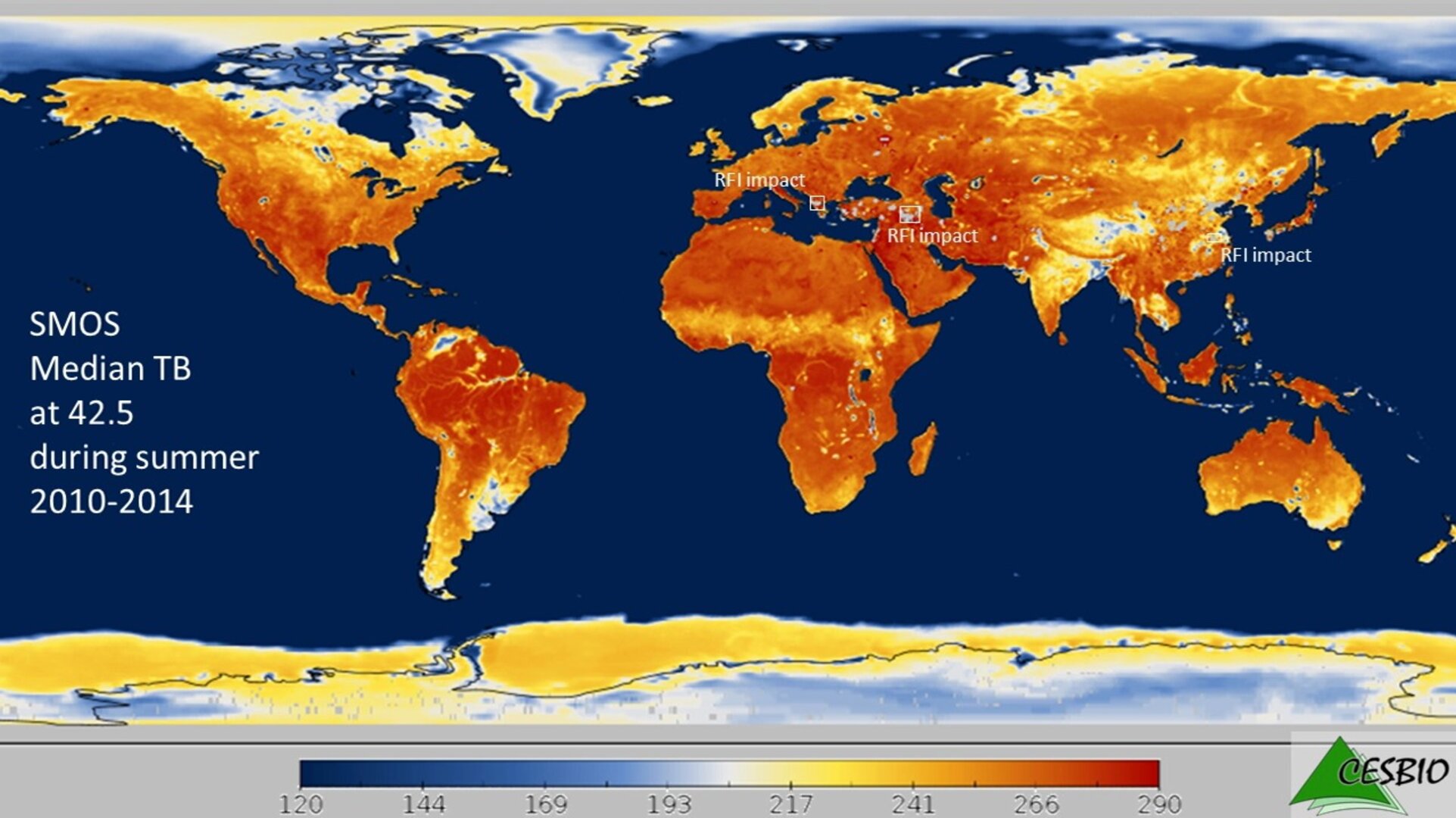 The animation showing a map average brightness tempertures in June–August from SMOS offers a glimpse as to how the mission can be used to detect thin sea ice and the freezing and thawing of ground.

With a history of very few technical issues and having demonstrated its value to science and its versatility as well as new opportunities for working in conjunction with NASA’s upcoming Soil Moisture Active Passive mission, SMOS will remain operational until at least 2017 – although there is actually enough fuel left for another 120 years!

Susanne Mecklenburg, ESA’s SMOS Mission Manager, said, “The collaboration between ESA and CNES, who jointly operate the mission, has been excellent.

“Extending the mission until 2017 not only demonstrates how the the scientific results so far have been appreciated, but also the excellent technical status of the mission.”

Steps have already started to look at how the potential next generation of missions could make could advance oceanography, hydrology and land surface studies.

The international salinity community will meet shortly to discuss developments in ocean salinity mapping after five years of SMOS measurements.

In addition, the 2nd SMOS conference will be held in Madrid next May to provide the science community with an update on mission developments and offer a forum for discussion.