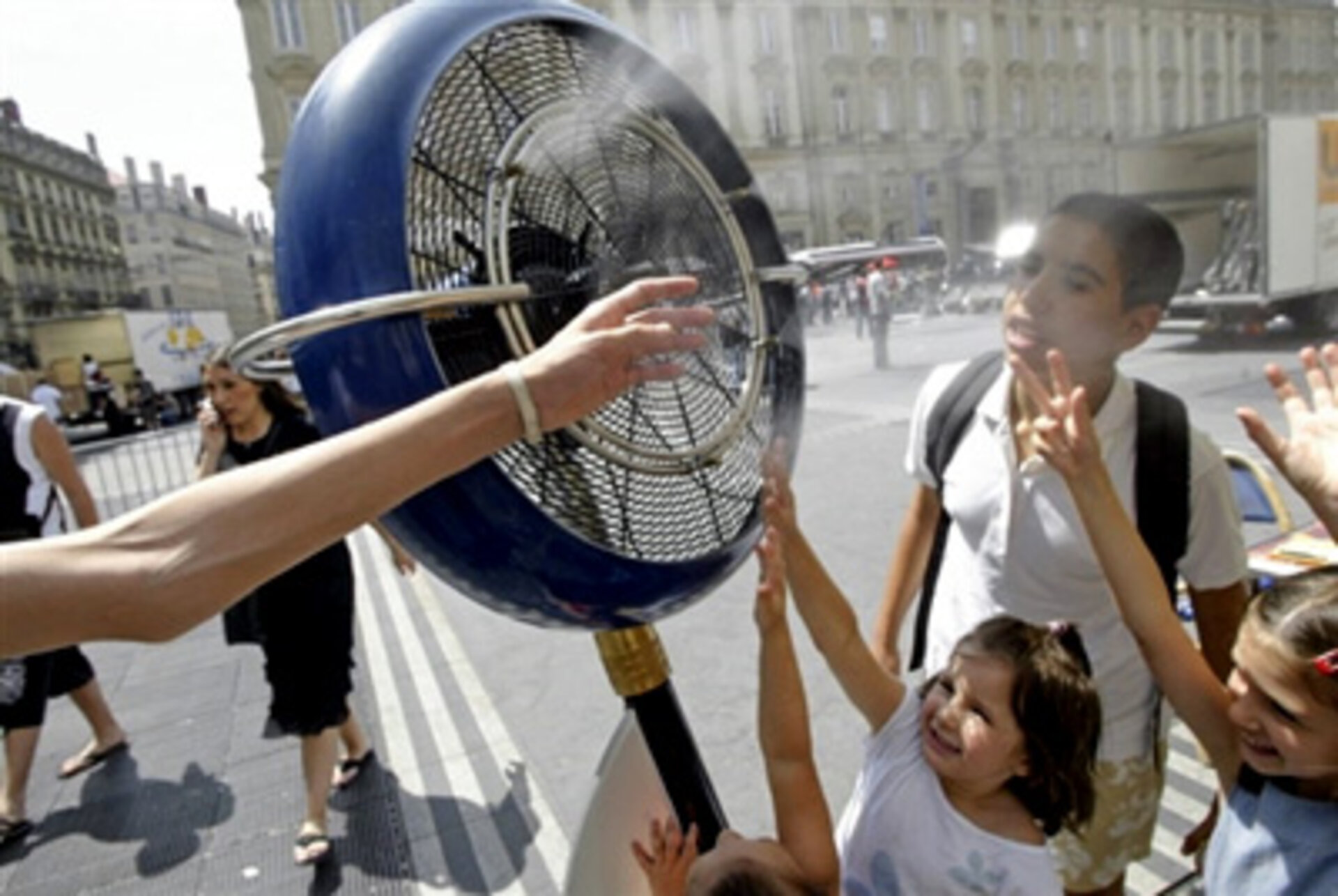 When heat waves strike, it's far more difficult to cope with stifling temperatures in built-up areas than it is out in the countryside. An ESA campaign has just been carried out to see if a spaceborne thermal infrared sensor could help policy makers and town planners reduce the number of casualties when temperatures soar.

Over the last decade, heat waves have claimed an increasing number of casualties among the elderly – particularly in southern Europe. The heat wave that hit Europe in 2003, for instance, is estimated to have caused more than 15 000 deaths in France alone, with about 70% of the mortalities occurring in the over 75s.

Prolonged periods of high temperatures also put a strain on medical resources and place an additional financial cost to society as a whole.

High densely built-up areas trap the heat, especially at night, causing what is called Urban Heat Islands (UHI) in which city centres can be up to 10º C warmer than surrounding rural areas. Another consequence of UHIs is that energy consumption rises with the increased use of air conditioners and refrigeration appliances.

Whilst poor insulation keeps buildings hot in the summer, it also allows heat to escape in the winter months – another factor associated with high-energy consumption and poor efficiency. With the social and financial costs that UHIs bring as well as climate-change issues in mind, many city councils have already adopted a range of energy efficiency policies to assess and monitor energy consumption.

ESA has recently launched a set of activities to aid decision and policy makers mitigate the effects of UHIs though appropriate alert systems, and in terms of reducing risk – through improved urban planning.

Within the framework of the proposed activities for the 'Reorientation of the Fuegosat Consolidation Phase', which falls under the Earth Watch element of ESA's Living Planet Programme, a high-resolution thermal infrared capability was recognised as necessary for Europe in the medium- to long-term.

In addition to the original fire-related application areas, infrared observations have the potential to contribute to reducing the effects of UHIs. To this end, an ESA project called Urban Heat Islands and Urban Thermography, funded through the agency’s Data User Element (DUE), is currently the subject of an open and competitive tender, which will be initiated in September 2008 with the participation of 10 European cities.

In preparation for this project, ESA organised a dedicated campaign – DESIREX-2008, which involved taking airborne and ground measurements with infrared sensors. The objective was to produce thermal datasets to support the upcoming trade-off studies that will be made by the Urban Heat Islands and Urban Thermography project, and to perform a preliminary mission analysis for a dedicated satellite sensor for the provision of temperature observations over European cities.

Madrid in Spain was chosen as the test site for the campaign as it is one of the cities in Europe that suffers many heat waves with air temperatures sometimes reaching 50º C.

More than 60 researchers from 14 different institutes gathered in Madrid to participate in the two-week field campaign, which ended on 4 July. The intensive campaign, organised in close cooperation with the Madrid City Council, involved multiple satellites, airborne and field instruments.

Ana Botella, who is responsible for Environmental Affairs at Madrid's City Council, said: "The City Council of Madrid considers that its participation to the DESIREX-2008 project will provide results of high relevance for the future urban planning and towards a more sustainable development of the city."

The campaign successfully generated a representative thermal dataset that will allow the project team to analyse the observational requirements for better assessment and monitoring of UHIs in Madrid.

"The datasets produced during the DESIREX 2008 campaign will serve ESA's Urban Heat Island and Urban Thermography," explained Professor José Antonio Sobrino from the University of Valencia, and the Principal Investigator for DESIREX-2008.

"The Analysis of such a comprehensive dataset will allow us to better understand the spatial and temporal variability of Urban Heat Islands in the city of Madrid, and should help us to define what would be the best satellite mission for efficient monitoring of European cities during summertime."

The main instrument used during the campaign was the Airborne Hyperspectral Scanner (AHS), which is an imaging line-scanner radiometer, installed on a CASA-212 200 series aircraft owned by Spain's National Institute for Aerospace Technology (INTA).
The AHS has 80 spectral channels available in the visible, shortwave infrared and thermal infrared. Thirty acquisition flight lines (15 flights in total) were obtained over Madrid with spatial resolutions varying from 2.5 to 6.8 metres.

Multiple field instrumentations operated by the partners in the DESIREX 2008 campaign have provided extremely detailed ground measurements, such as radiometric measurements used for calibration and validation of parameters extracted from the AHS airborne sensor, measurements for characterising the UHI, such as the air and radiometric temperatures in different building terraces.

Four cars carrying instrumentation followed the flight paths and analysed the effect and the evolution of the UHI during the experiment.

An extensive analysis of all the DESIREX-2008 data collected from spaceborne, airborne and ground observations will now take place with the first results expected in November 2008.

"The city of Madrid will benefit greatly from the DESIREX-2008 campaign. The results will allow us to have detailed information on Urban Heat Islands for the delineation of these highly sensitive areas and their incorporation into more effective urban planning for heat wave mitigation," said José Manuel Romero Cuadrado, Head of the Cartographic Department with the Madrid City Council.

"The availability of information on urban climate should also help our city council to optimise an intelligent use of energy at the level of the city districts but also at building level."

The DESIREX-2008 activity was funded through ESA's Reorientation of the Fuegosat Consolidation Phase. Participants included Spanish teams from Universities in Valencia (UVEG), Madrid (UAM, UCM) and Vigo (UVIGO), along with national institutes (INTA, AEMET, CIEMAT, CECAF, AENA and LABEIN), French teams from the University of Strasbourg and the City Council of Madrid.