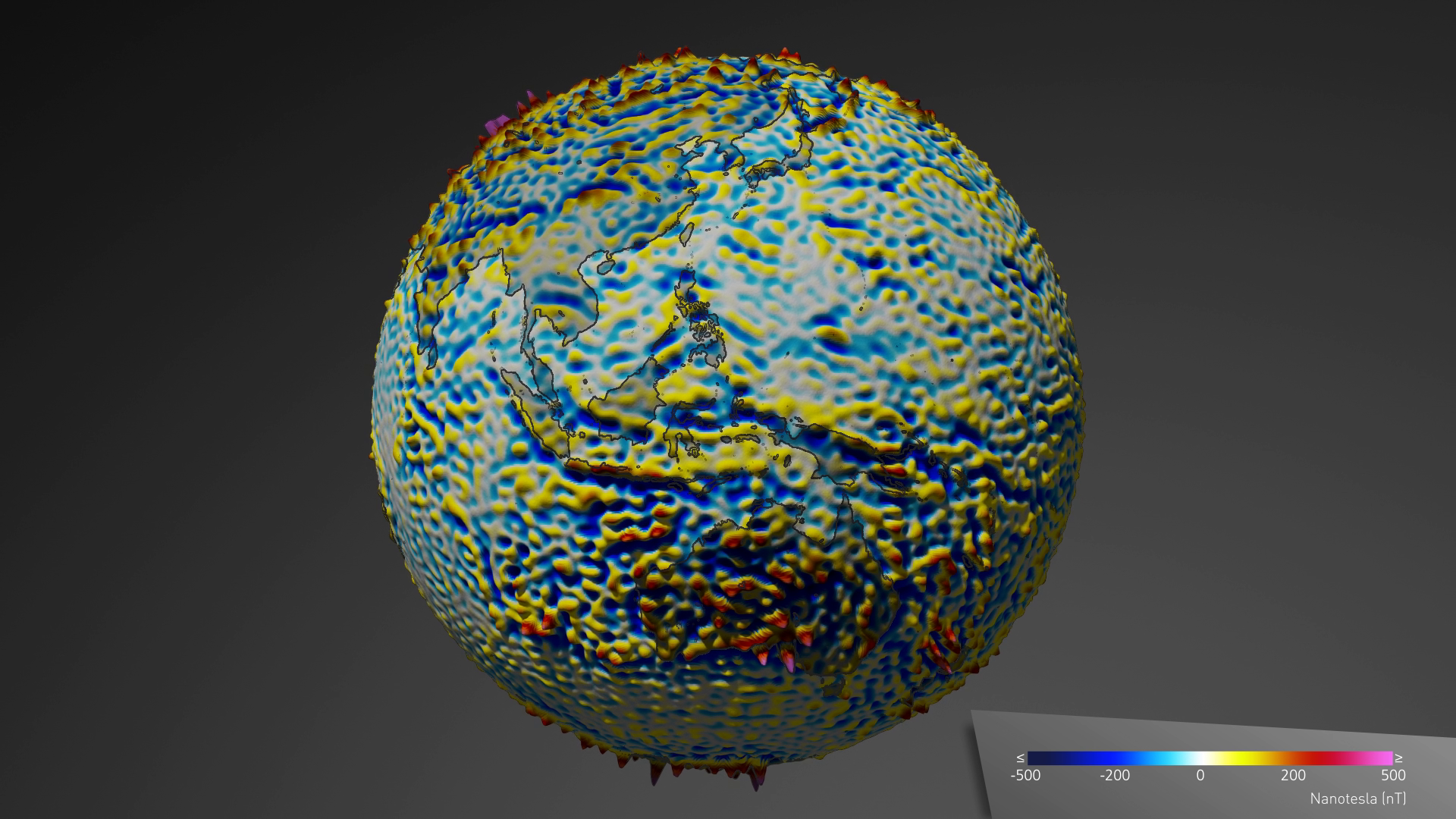 ESA’s Swarm satellites are seeing fine details in one of the most difficult layers of Earth’s magnetic field to unpick – as well as our planet’s magnetic history imprinted on Earth’s crust.

Earth’s magnetic field can be thought of as a huge cocoon, protecting us from cosmic radiation and charged particles that bombard our planet in solar wind. Without it, life as we know it would not exist.

Most of the field is generated at depths greater than 3000 km by the movement of molten iron in the outer core. The remaining 6% is partly due to electrical currents in space surrounding Earth, and partly due to magnetised rocks in the upper lithosphere – the rigid outer part of Earth, consisting of the crust and upper mantle.

Although this ‘lithospheric magnetic field’ is very weak and therefore difficult to detect from space, the Swarm trio is able to map its magnetic signals. After three years of collecting data, the highest resolution map of this field from space to date has been released.

“By combining Swarm measurements with historical data from the German CHAMP satellite, and using a new modelling technique, it was possible to extract the tiny magnetic signals of crustal magnetisation,” explained Nils Olsen from the Technical University of Denmark, one of the scientists behind the new map.

ESA’s Swarm mission manager, Rune Floberghagen, added: “Understanding the crust of our home planet is no easy feat. We can’t simply drill through it to measure its structure, composition and history.

“Measurements from space have great value as they offer a sharp global view on the magnetic structure of our planet’s rigid outer shell.”

One of these anomalies occurs in Central African Republic, centred around the city of Bangui, where the magnetic field is significantly sharper and stronger. The cause for this anomaly is still unknown, but some scientists speculate that it may be the result of a meteorite impact more than 540 million years ago.

The magnetic field is in a permanent state of flux. Magnetic north wanders, and every few hundred thousand years the polarity flips so that a compass would point south instead of north.

When new crust is generated through volcanic activity, mainly along the ocean floor, iron-rich minerals in the solidifying magma are oriented towards magnetic north, thus capturing a ‘snapshot’ of the magnetic field in the state it was in when the rocks cooled.

Since magnetic poles flip back and forth over time, the solidified minerals form ‘stripes’ on the seafloor and provide a record of Earth’s magnetic history.

The latest map from Swarm gives us an unprecedented global view of the magnetic stripes associated with plate tectonics reflected in the mid-oceanic ridges in the oceans.

“These magnetic stripes are evidence of pole reversals and analysing the magnetic imprints of the ocean floor allows the reconstruction of past core field changes. They also help to investigate tectonic plate motions,” said Dhananjay Ravat from the University of Kentucky in the USA.

“The new map defines magnetic field features down to about 250 km and will help investigate geology and temperatures in Earth’s lithosphere.”