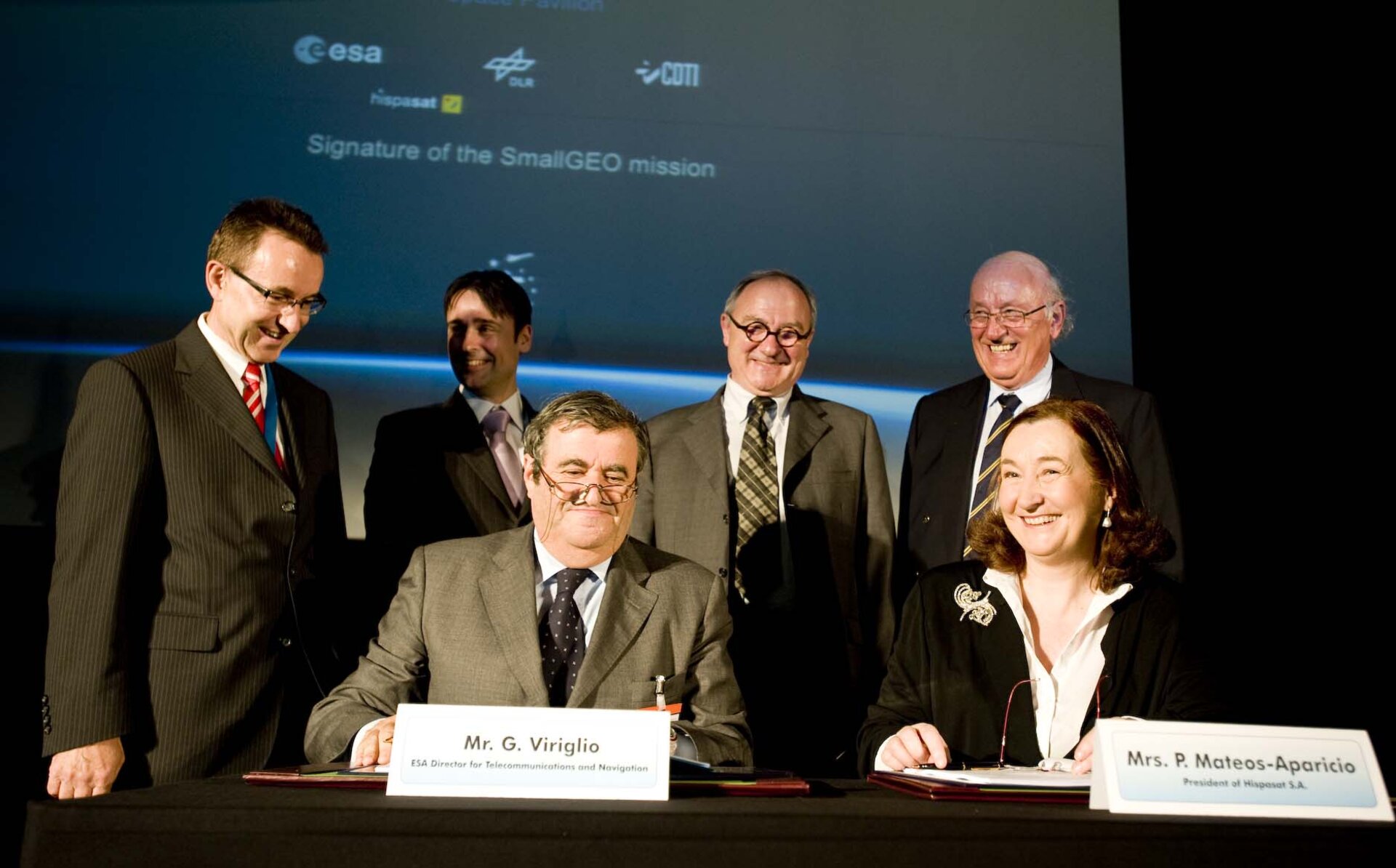 Today - during the Berlin Air Show, ILA 2008 - ESA and Hispasat S.A. (Spain) signed a preliminary authorisation to proceed for the Small GEO Mission. This will launch the initial activities of an industrial consortium led by Hispasat.

The signing took place in the presence of representatives from the German Space Agency (DLR), the Spanish Delegation to ESA (CDTI) and

The Small GEO Programme is aimed at the development of a small, general-purpose geostationary satellite platform, which will enable European industry to compete effectively in the commercial telecom market for small platforms.

To achieve this objective, ESA has established an element in its ARTES (Advanced Research in Telecommunications Systems) Programme. This element, known as ARTES 11, is divided into two parts.

The first part covers the development of a platform supporting a payload mass of up to 300 kg, a payload power demand of up to 3 kW, and an operational lifetime of up to 15 years.

The second part, the subject of the preliminary authorization to proceed that has just been signed, involves the development and launch of a Small GEO satellite and associated mission to provide flight qualification and in-orbit demonstration for the platform.

A consortium led by the German company is developing the Small Geostationary Platform. Work started in March 2007. The core team of companies that is jointly developing and will later commercialise the platform includes, besides and its Luxembourg subsidiary LuxSpace, the Swedish Space Corporation, Carlo Gavazzi Space (Italy), and Oerlikon (Switzerland).

The platform development is proceeding according to plan. The definition phase has been completed and the detailed design, manufacturing and testing of the platform is about to start. To this end, the selection of the equipment suppliers for the main platform elements has been completed.

The selection of Hispasat for the Small GEO mission was made through an open Call for Interest issued by ESA in June 2007. Following the selection, a Request For Quotation was issued by ESA to Hispasat in August 2007. The mission proposal was positively evaluated by end of 2007.

The resulting satellite, Hispasat AG1, will serve as an important and distinctive asset in Hispasat's satellite fleet with:

Hispasat, a leading operator for the Spanish and Portuguese speaking markets, will be in position to push European innovative technologies to the telecommunication satellite commercial arena leading to the exploitation of enhanced services.

To develop the mission, Hispasat has built the necessary industrial team to implement all the programme elements. will act as the Satellite Prime Contractor. TESAT GmbH (Germany) will be the Payload Prime and will be responsible for the integration of the Transparent Repeater (produced by TESAT) and the REDSAT payload.