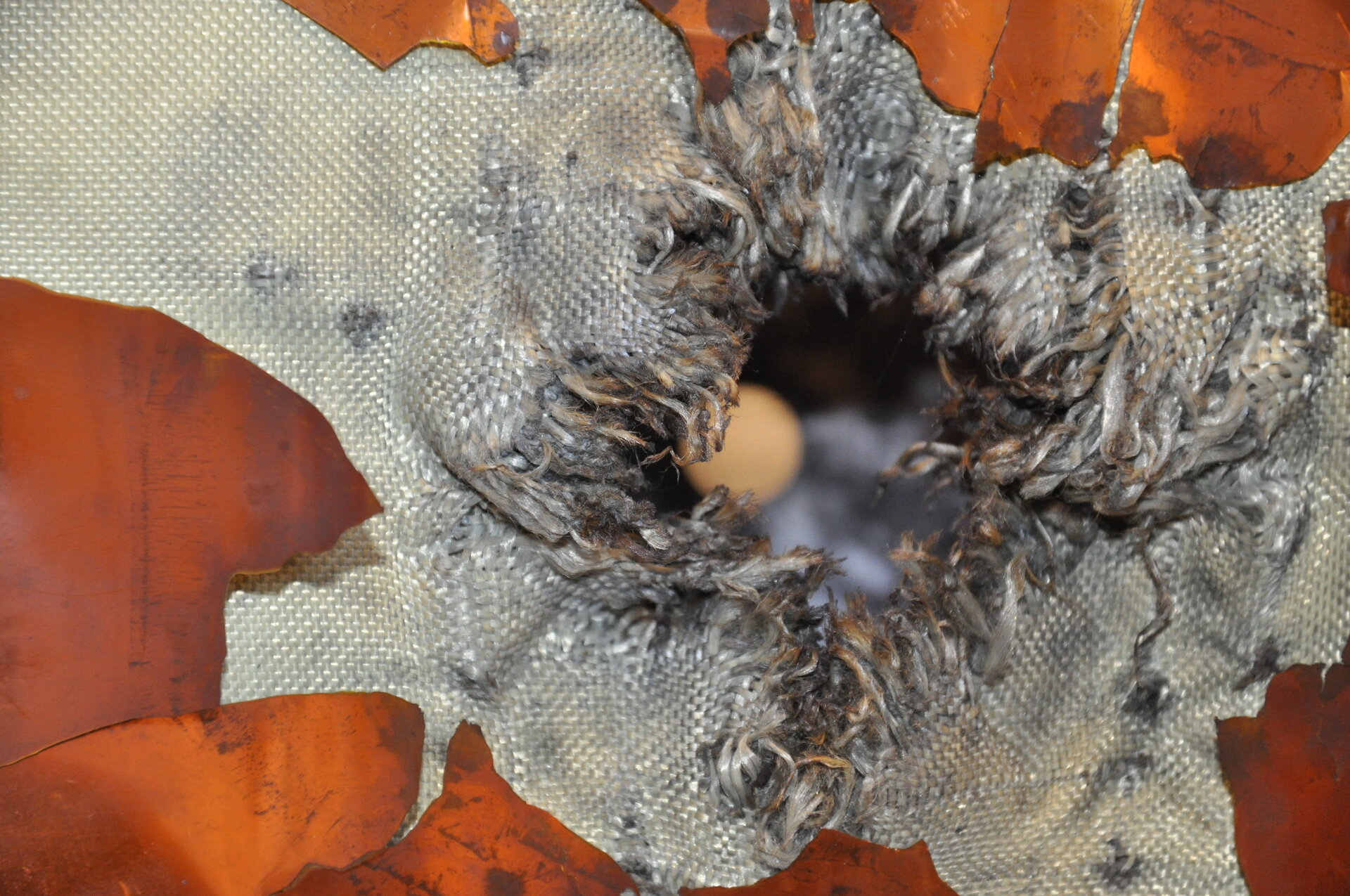 An exit hole through Kevlar–Nextel fabric after hypervelocity testing of the multilayer shielding for ESA’s ATV space freighter, simulating an impact by space debris. The good news is that testing confirms the spacecraft's pressure shell would survive such a collision intact.

Testing was carried out for ESA’s Space Environment and Effects section at the Fraunhofer Institute for High-Speed Dynamics, Ernst-Mach-Institut, EMI, in Freiburg, Germany, using a high-performance light-gas gun.

A 7.5 mm-diameter aluminium bullet was shot at 7 km/s towards the same ‘stuffed Whipple shield’ design used to protect the ATV and the other International Space Station manned modules.

This represents the upper end of the size of debris the shield is designed to cope with. Multiple layers give greater protection than a single thick aluminium layer.

The debris begins by piercing a blanket of multilayer insulation, followed by a 1 mm-thick aluminium ‘bumper shield’.

This impact makes the solid object break apart into a cloud of fragments and vapour, which becomes easier for the following layers to capture or deflect. Next comes the layer of stuffing seen in this main photo, a weave of lightweight Kevlar and Nextel fabric, which further slows the incoming debris.

The stuffing fabric and a surrounding sheet has been thoroughly shredded by the impact, but the overall mass and energy of the debris has been sufficiently dissipated that it has merely harmlessly scorched the innermost 3-mm-thick aluminium wall.

In orbit, this entire shield measures just 128 mm across.

The stronger-than-steel Kevlar fabric was invented by Stephanie Kwolek of the DuPont company, who died this month.

On Earth, her invention’s ‘killer app’ proved to be bulletproof vests; its use on the Space Station helps to ensure that module hulls could be designed several centimetres thinner than would otherwise be the case.

ESA’s next and final ATV, Georges Lemaître, will be launched to the orbital outpost this summer.