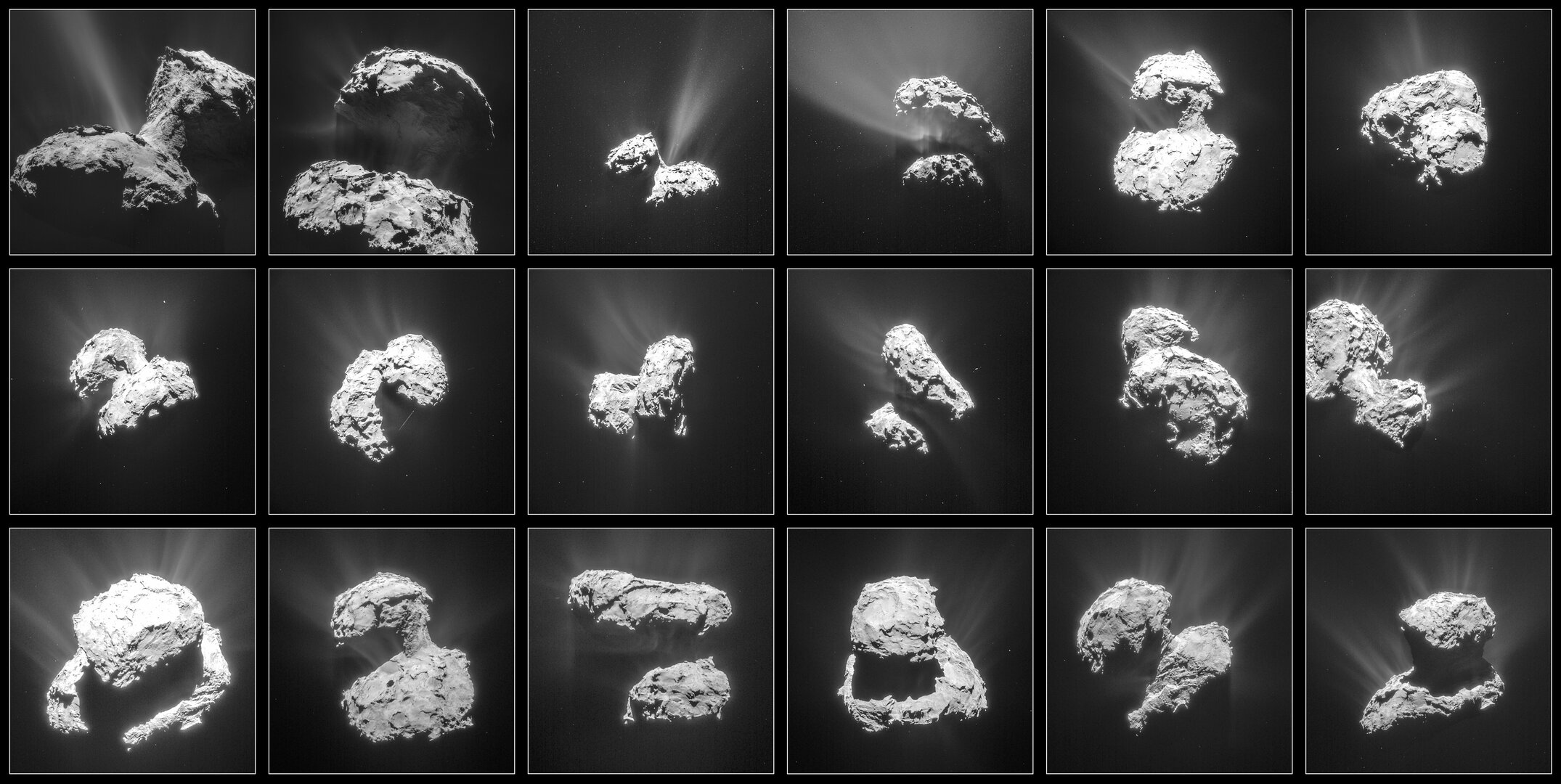 Four months from today, on 13 August, Comet 67P/Churyumov-Gerasimenko will reach perihelion – a moment that defines its closest point to the Sun along its orbit.

For 67P/Churyumov-Gerasimenko, this takes place at a distance of about 185 million km from the Sun, between the orbits of Earth and Mars.

Rosetta is along for the ride, and has been watching the gradual evolution of the comet since arriving in August 2014.

As the comet’s surface layers are gently warmed, frozen ices sublimate. The escaping gas carries streams of dust out into space, and together these slowly expand to create the comet’s fuzzy atmosphere, or coma.

As the comet continues to move closer to the Sun, the warming continues and activity rises, and pressure from the solar wind causes some of the materials to stream out into long tails, one made of gas, the other of dust. The comet’s coma will eventually span tens of thousands of kilometres, while the tails may extend hundreds of thousands of kilometres, and both will be visible through large telescopes on Earth.

But it is Rosetta’s close study of the comet, from just a few tens of kilometres above its surface, which enables the source of the comet’s activity to be studied in great detail, providing context to the more distant ground-based observations.

This spectacular montage of 18 images shows off the comet’s activity from many different angles as seen between 31 January (top left) and 25 March (bottom right), when the spacecraft was at distances of about 30 to 100 km from the comet. At the same time, Comet 67P/Churyumov-Gerasimenko was at distances between 363 million and 300 million km from the Sun.

After perihelion, Rosetta will continue to follow the comet, watching how the activity subsides as it moves away from the Sun and back  to the outer Solar System again.

While the majority of the images in the montage have been released previously, the final frame is published for the first time in today's Cometwatch on the Rosetta blog.

This work is licensed under the Creative Commons Attribution-ShareAlike 3.0 IGO (CC BY-SA 3.0 IGO) licence. The user is allowed to reproduce, distribute, adapt, translate and publicly perform this publication, without explicit permission, provided that the content is accompanied by an acknowledgement that the source is credited as 'ESA - European Space Agency’, a direct link to the licence text is provided and that it is clearly indicated if changes were made to the original content. Adaptation/translation/derivatives must be distributed under the same licence terms as this publication. The user must not give any suggestion that ESA necessarily endorses the modifications that you have made. No warranties are given. The licence may not give you all of the permissions necessary for your intended use. For example, other rights such as publicity, privacy, or moral rights may limit how you use the material. Any of the above conditions can be waived if you get permission from ESA. To view a copy of this licence, please visit http://creativecommons.org/licenses/by-sa/3.0/igo/