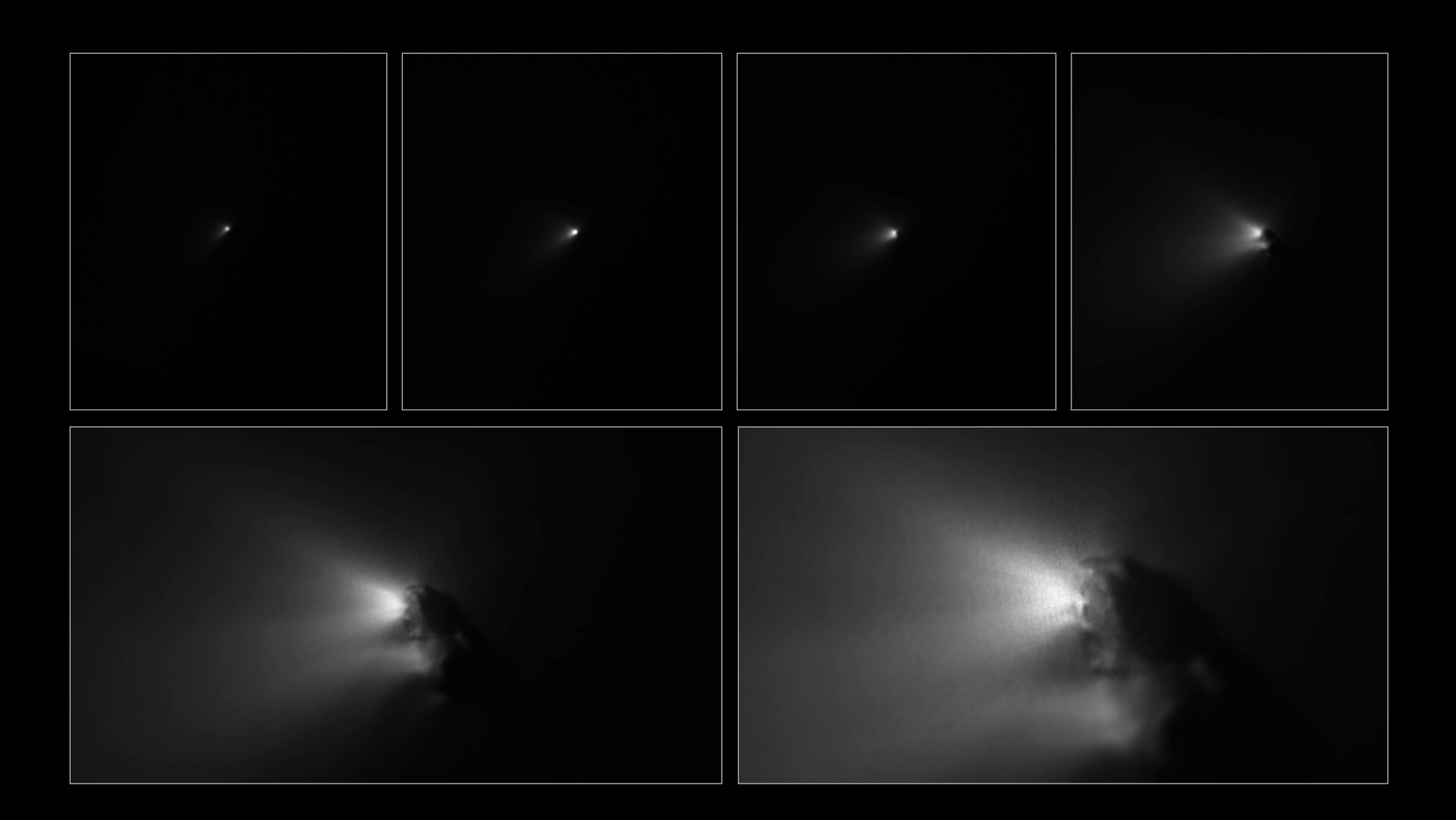 On the night of 13–14 March 1986, ESA’s Giotto spacecraft flew to within a mere 596 km of Comet Halley, revealing for the first time how a cometary nucleus looks up close.

The comet is also known as 1P/Halley, where 1P marks it as the first comet to be identified as periodic. It was Edmond Halley who recognised that comets observed in 1531, 1607 and 1682 had remarkably similar orbital properties and suggested that they might just be the same object, regularly returning to our skies.

In 1705, he forecast that the comet, moving along a very elongated ellipse with a period of about 76 years, would be visible again in 1758. Unfortunately, Halley died before then, but other astronomers did observe the return in 1758 and 1759, confirming his prediction and, with it, the possibility that comets might indeed be periodic.

Further appearances of Comet Halley, in 1835 and 1910, were eagerly awaited and provided insights into the nature of comets, with increasingly more powerful astronomical instrumentation. After the dawn of the space age in the second half of the 20th century, the 1986 return of the comet was welcomed with a fleet of spacecraft.

The Halley Armada included Giotto alongside two probes from the Soviet Union, Vega-1 and Vega-2, and two from Japan, Sakigake and Suisei. NASA’s International Cometary Explorer, which had became the first space mission to approach a comet, passing some 7800 km of Comet 21P/Giacobini–Zinner in 1985, also observed Halley in 1986.

Giotto, named after the Italian painter who, in 1303, depicted the star of Bethlehem as a comet, obtained the closest pictures ever taken of a comet at the time. After Vega-1 and Vega-2 came within 8900 km and 8000 km, respectively, in early March 1986, ESA used their data to guide Giotto even closer.

As scientists analysed the unique images and data from Giotto, they were also thinking ahead, laying the foundations of a future project that would evolve into ESA’s Rosetta mission. Launched in 2004, Rosetta reached Comet 67P/Churyumov–Gerasimenko in 2014, orbiting the comet and deploying the Philae lander.

Rosetta escorted the comet as they passed perihelion – the closest point to the Sun along their orbit – in August 2015, and will continue close-up studies until the end of September 2016, when it will be guided into a controlled impact on the surface.

This week, scientists are celebrating the 30th Anniversary of Giotto’s close encounter with Comet Halley, as well as the continuing investigations by Rosetta, at the 50th ESLAB Symposium “From Giotto to Rosetta,” in Leiden, the Netherlands.