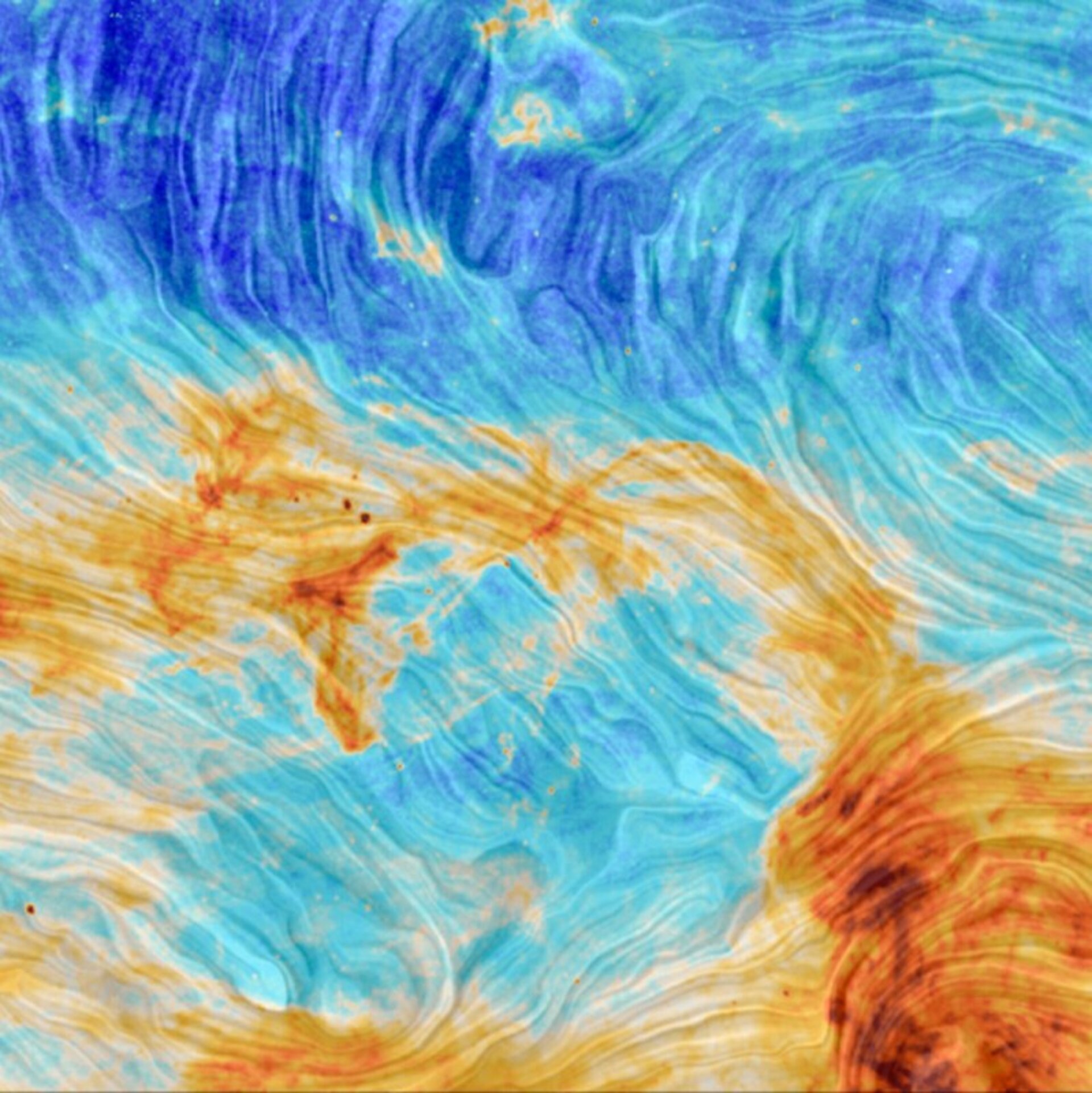 The spider in the loop

This multicoloured swirl of yellow and blue shows a prominent ring of gas near the North Celestial Pole. The pole appears to be fixed in place, while the rest of the night sky slowly circles around it because of Earth’s rotation. This image comes courtesy of ESA’s Planck satellite, which spent years mapping the entire sky in exquisite detail between 2009 and 2013.

The North Celestial Loop lies over 325 light-years away from us towards the constellation of Ursa Major (The Great Bear). It is composed of dust and neutral hydrogen blown and sculpted into an expanding shell. This can happen in a number of ways: when a dying star explodes as a supernova, by the strong winds streaming into space from nearby stars, or even when fast-moving clouds near the edges of the Milky Way fall inwards and shunt material towards the centre of our Galaxy.

Rather than being a neat, distinct loop, this disorderly feature comprises numerous filaments that knit together, forming small clouds that are connected via coarse arches of material. One such cloud – dubbed a cirrus cloud because it reminds us of the thin, wispy cirrus clouds familiar on Earth – can be seen sitting at the centre of the frame, with tendrils extending from a central point. This feature has been nicknamed ‘the Spider’.

The Loop is expanding and pushing through its surroundings at 15–20 km/s. It contains a mass of neutral hydrogen roughly equivalent to the mass of 1500 Suns. Recent studies of its expansion have puzzled astronomers. They expect neutral hydrogen loops to expand in a spherical manner, but this loop appears instead to be expanding in a cylindrical manner, with the cylinder pointing almost directly towards us, hence its ring-like appearance.

This image is not a traditional view of the Loop; it has a pattern reminiscent of the relief lines of a map spread across the frame, resembling small eddies of swirling water in a stream. These lines represent the orientation of the Milky Way’s magnetic field, while the colours indicate the strength of emission from cosmic dust at each location. Dust grains in and around the Milky Way align themselves along the field lines emanating from our Galaxy into space, and thus their emission is also aligned. This polarised dust emission was detected by the Planck satellite.

The emission from dust is computed from a combination of Planck observations at 353, 545 and 857 GHz, whereas the direction of the magnetic field is based on Planck polarisation data at 353 GHz.