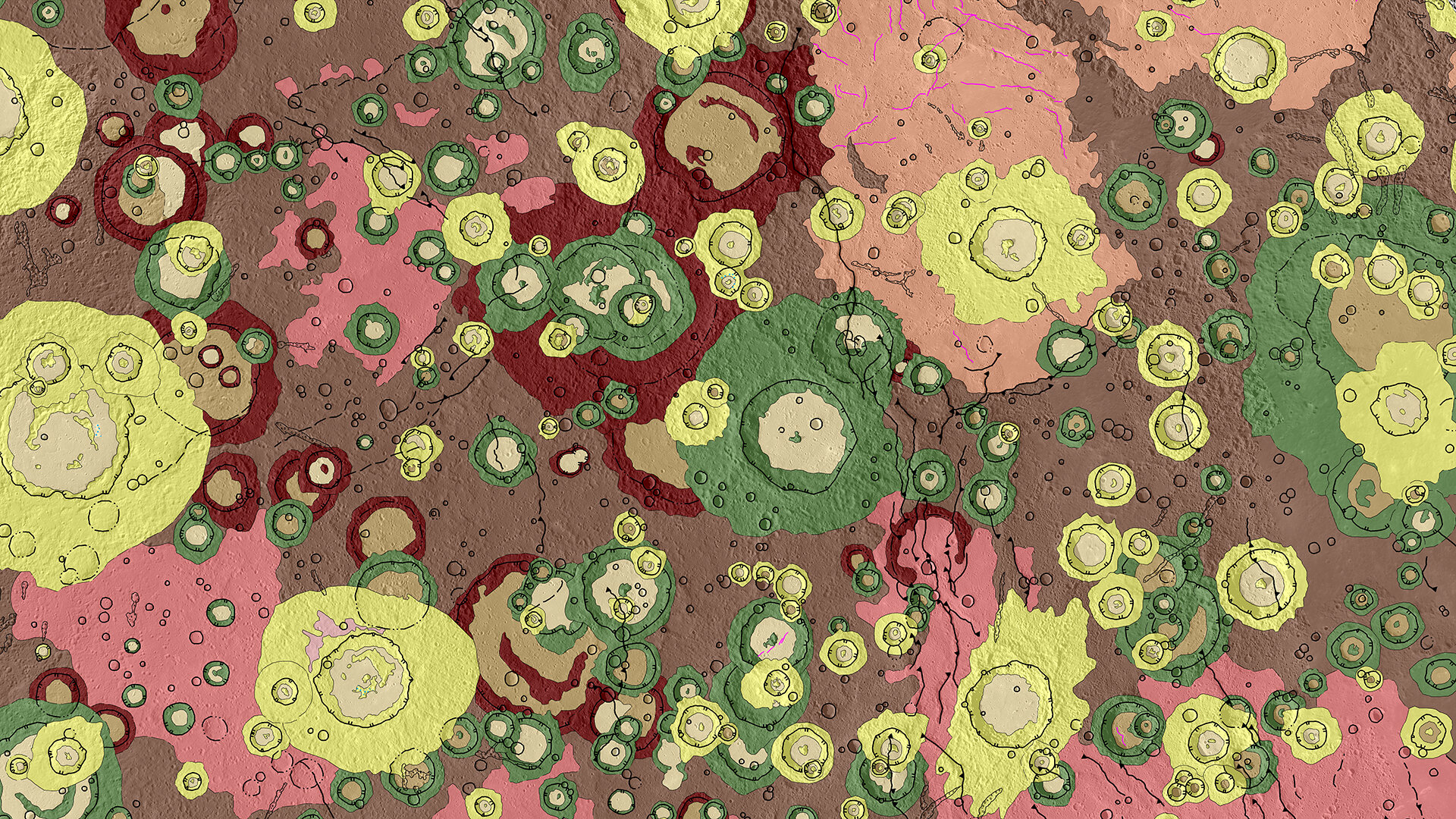 Geology of the Victoria Quadrangle on Mercury

Mercury, the innermost planet of our Solar System is a grey, barren world to our human eyes. In stark contrast, this map shows a portion of the surface in a patchwork of colour, each shade corresponding to a different type of geological feature.

The image is an excerpt from a detailed geological map that is the first complete geological survey of this region made using data from NASA’s Messenger mission, which orbited Mercury from 2011 to 2015. It covers a section in the planet’s northern hemisphere known to planetary geologists as the Victoria Quadrangle, and is centred on about 45ºW / 45ºN.

From impact craters in various states of degradation (dark red/green/yellow/beige) to smooth volcanic plains (pink/peach) and rougher plains materials (browns), the scene captures billions of years of rich geological history. For scale, the large crater just right of centre is about 150 km wide.

In total, 867 craters larger than 5 km are mapped in this image – the full Victoria Quadrangle contains 1789. Of those, 519 are larger than 20 km (268 in this particular section), and for those the pattern of the ejected material is mapped and classified as well. Mapping the density and characteristics of craters helps to determine the relative age of a surface: in general, the more craters, the older the surface.

The map also indicates surface features such as hollows, pits, faults and wrinkle ridges, which were imaged in high resolution by Messenger, many identified for the first time. (For a full description of the annotations see the complete geological map of this region.)

For example, Messenger discovered hollows that appear to be young and unique to Mercury, and may be due to a sublimating material weakening parts of the surface such that it collapses.

ESA’s BepiColombo mission, being prepared for launch next year, will follow up on many of the surface features identified by Messenger. For example, BepiColombo’s high-resolution imaging, from ultraviolet to thermal infrared, will determine the chemical composition of the hollows, helping to home in on how they form.

BepiColombo will also be able to improve the understanding of the variations in volcanic eruptive style over time by studying the different volcanic plains materials. Volcanic plains also display wrinkle ridges, sinuous features that form when lavas cool and subside, causing the crust to contract horizontally. BepiColombo will complement Messenger data by capturing higher-resolution images, in particular over the southern hemisphere, to help determine how this contraction was distributed over time, and thus the cooling history of the planet.

The BepiColombo mission is a partnership with the Japan Aerospace Exploration Agency (JAXA). It comprises two science orbiters, ESA’s Mercury Planetary Orbiter and JAXA’s Mercury Magnetospheric Orbiter, which will reach Mercury together in December 2025.

A full description of the geologic map and associated paper is available via the Journal of Maps: “Geology of the Victoria quadrangle (H02), Mercury,” by Galluzzi et al. (2016). The map is one of many being compiled, in order to complete a consistent global map prior to BepiColombo’s arrival at the planet, to support the mission’s observing campaigns.