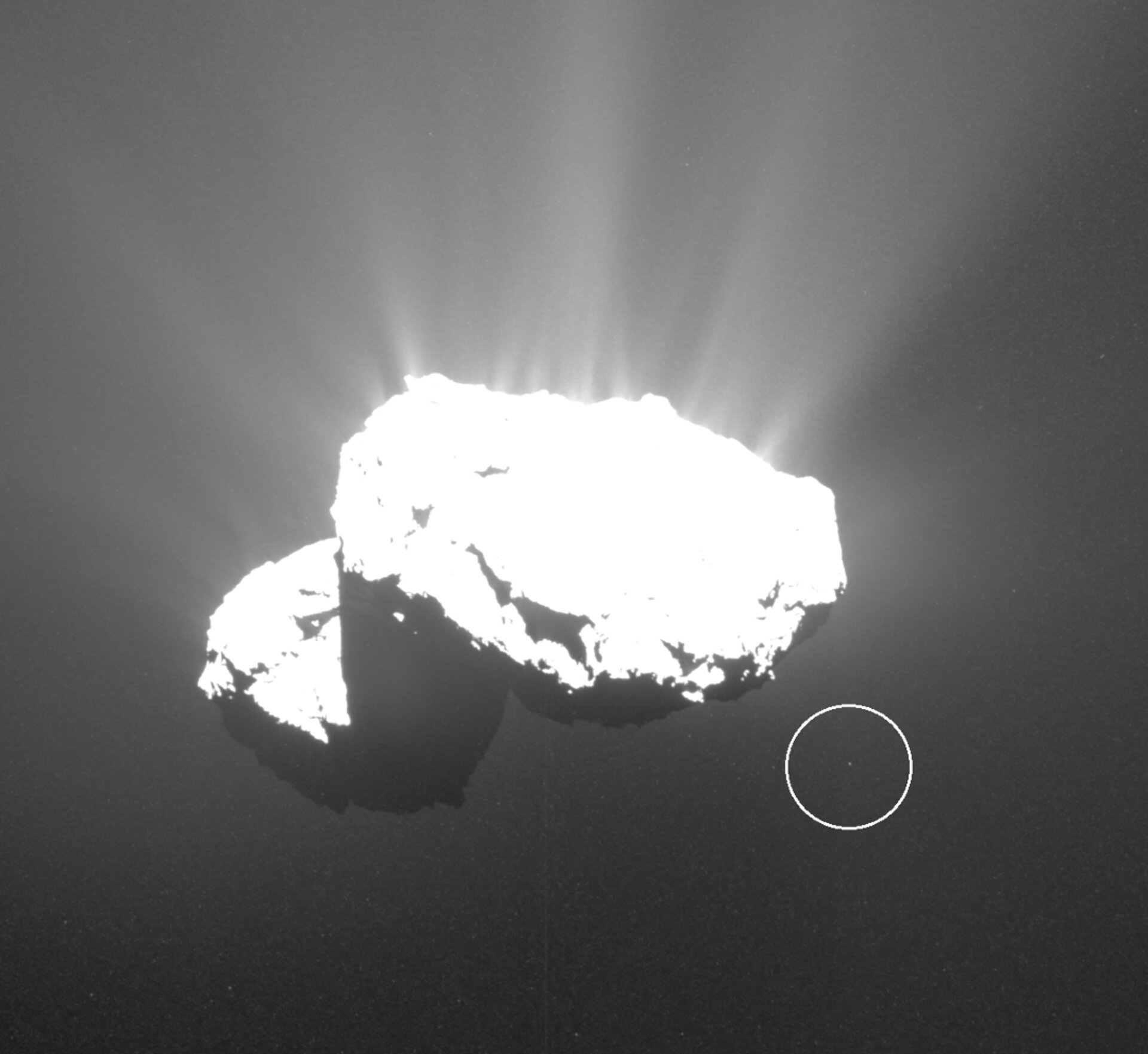 Last week marked five years since ESA’s Rosetta probe arrived at its target, a comet named 67P/Churyumov-Gerasimenko (or 67P/C-G). Tomorrow, 13 August, it will be four years since the comet, escorted by Rosetta, reached its perihelion – the closest point to the Sun along its orbit. This image, gathered by Rosetta a couple of months after perihelion, when the comet activity was still very intense, depicts the nucleus of the comet with an unusual companion: a chunk of orbiting debris (circled).

Comet 67P/C-G is a dusty object. As it neared its closest approach to the Sun in late July and August 2015, instruments on Rosetta recorded a huge amount of dust enshrouding the comet. This is tied to the comet’s proximity to our parent star, its heat causing the comet’s nucleus to release gases into space, lifting the dust along. Spectacular jets were also observed, blasting more dust away from the comet. This disturbed, ejected material forms the ‘coma’, the gaseous envelope encasing the comet’s nucleus, and can create a beautiful and distinctive tail.

A single image from Rosetta’s OSIRIS instrument can contain hundreds of dust particles and grains surrounding the 4 km-wide comet nucleus. Sometimes, even larger chunks of material left the surface of 67P/C-G – as shown here.

The sizeable chunk in this view was spotted a few months ago by astrophotographer Jacint Roger from Spain, who mined the Rosetta archive, processed some of the data, and posted the finished images on Twitter as an animated GIF. He spotted the orbiting object in a sequence of images taken by Rosetta’s OSIRIS narrow-angle camera on 21 October 2015. At that time, the spacecraft was at over 400 km away from 67P/C-G’s centre. The animated sequence is available for download here.

Scientists at ESA and in the OSIRIS instrument team are now looking into this large piece of cometary debris in greater detail. Dubbed a ‘Churymoon’ by researcher Julia Marín-Yaseli de la Parra, the chunk appears to span just under 4 m in diameter.

Modelling of the Rosetta images indicates that this object spent the first 12 hours after its ejection in an orbital path around 67P/C-G at a distance of between 2.4 and 3.9 km from the comet’s centre. Afterwards, the chunk crossed a portion of the coma, which appears very bright in the images, making it difficult to follow its path precisely; however, later observations on the opposite side of the coma confirm a detection consistent with the orbit of the chunk, providing an indication of its motion around the comet until 23 October 2015.

Scientists have been studying and tracking debris around 67P/C-G since Rosetta’s arrival in 2014. The object pictured in this view is likely the largest chunk detected around the comet, and will be subject to further investigations.

Comet 67P/C-G is currently in the outer Solar System, between the orbits of Mars and Jupiter, and will have its next perihelion in late 2021.