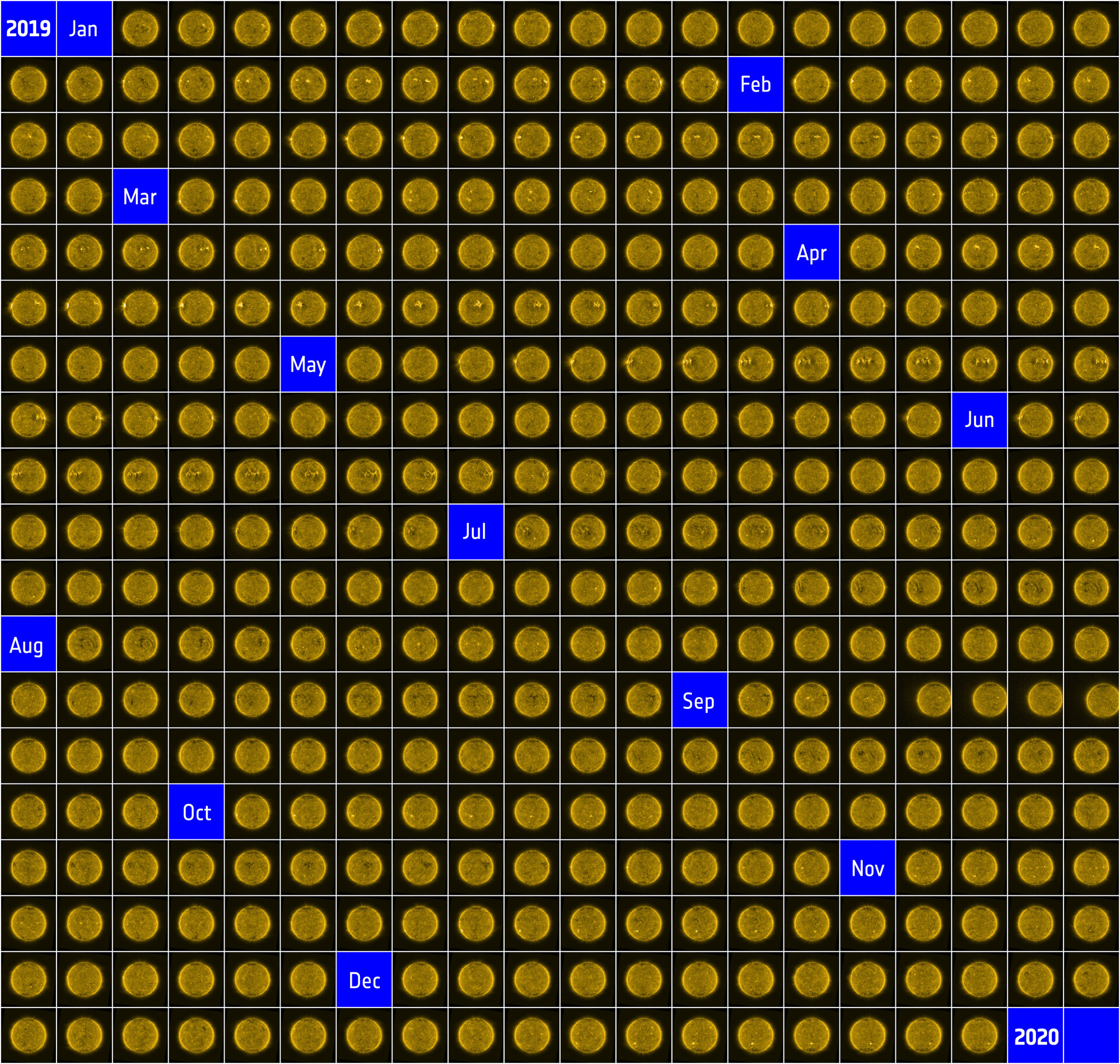 The changing activity of our Sun as seen by ESA’s Proba-2 satellite in 2019.

The satellite is continuously monitoring the Sun – one image was selected to represent each day of the year in this montage of 365 Suns. The images were taken by the satellite’s SWAP camera, which works at extreme ultraviolet wavelengths to capture the Sun’s hot turbulent atmosphere – the corona, at temperatures of about a million degrees.

Throughout 2019, the Sun showed low levels of activity, as it is currently at the minimum of its 11-year activity cycle. The most energetic flare of the year was observed on 6 May close to the eastern limb of the Sun (the left side of the Sun in the corresponding image). It was classified as a C9.9 class flare that divides solar flares according to their strength. The smallest are A, followed by B, C, M and X, with each letter representing a ten-fold increase in energy output such that an X-class flare is 100 times stronger than a C-class flare.

Proba-2 also performed various scientific campaigns in 2019. One of these campaigns is evident in the images above in early September, where the Sun is positioned to one side of the images. Throughout this period Proba-2 provided extended images of the solar atmosphere to the east of the Sun, in support of a scientific study performed with NASA’s Parker Solar Probe mission. To make these observations the whole satellite was reoriented to observe more of the solar atmosphere.

Proba-2 will continue to support scientific campaigns and missions throughout 2020, including ESA’s Solar Orbiter mission, which is scheduled for launch on 5 February 2020 from Cape Canaveral, Florida, USA. Proba-2 has already supported Solar Orbiter during the mission’s preparation, as technology heritage has passed from the satellite’s SWAP imager to the Solar Orbiter Extreme Ultraviolet Imager.

With its suite of 10 state-of-the-art instruments, Solar Orbiter will perform unprecedented close-up observations of the Sun and from high-latitudes, providing the first images of the uncharted polar regions of the Sun, and investigating the Sun-Earth connection. The mission will provide unprecedented insight into how our parent star works in terms of the 11-year solar cycle, and how we can better predict periods of stormy space weather.