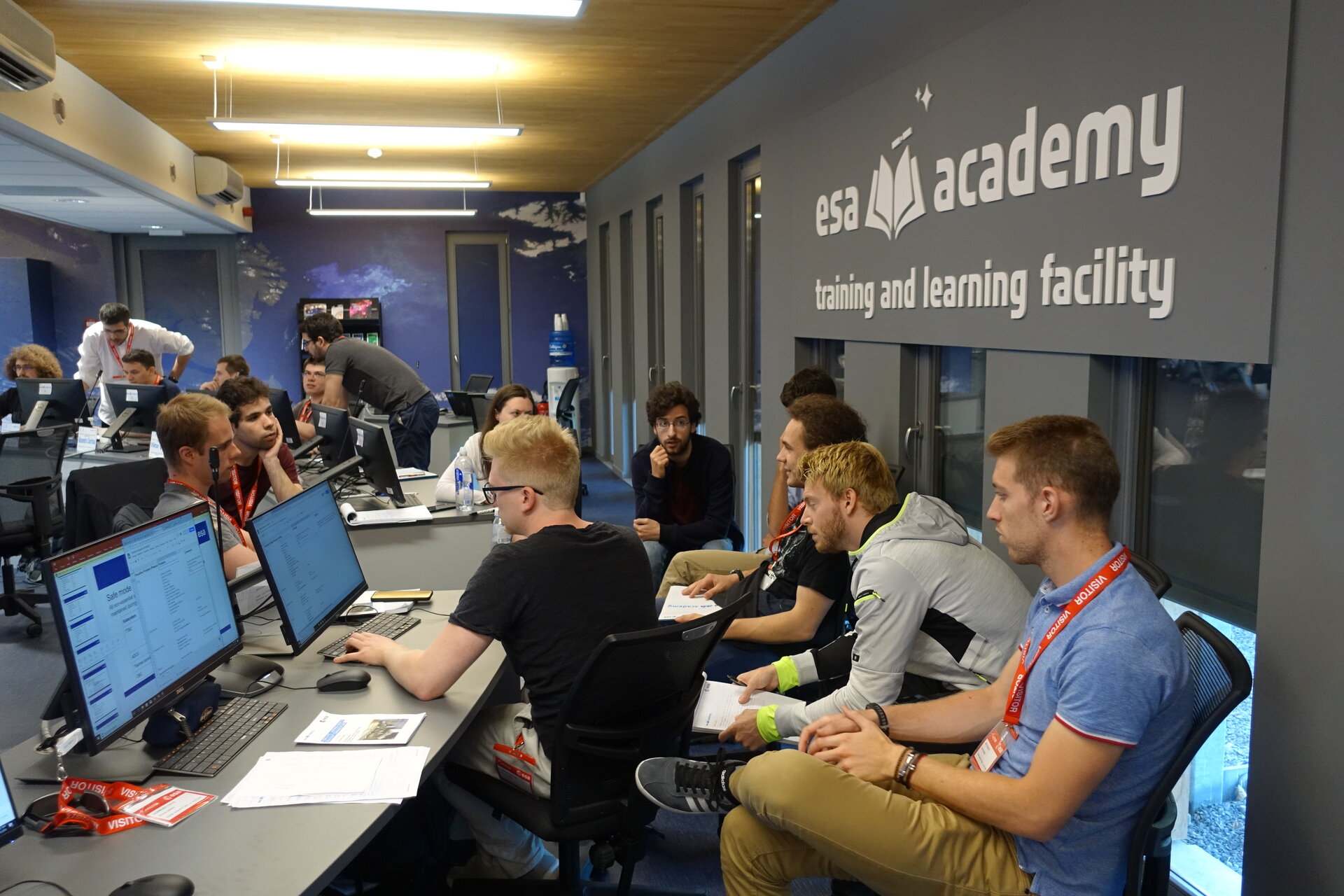 ESA staff and visiting students are celebrating the successful completion of the recent ESEO & FYS – Ladybird Guide to Spacecraft Communications Training Course. Held from 3 – 6 July 2018 at ESA Academy’s new Training and Learning Facility, in ESEC-Galaxia, Belgium, there were 30 students from 11 different ESA Member and Associate States in attendance. Leading proceedings was a senior ESA Engineer from the Advanced Mission Concepts section of the Operations Department.

This course was a special edition of the Ladybird Guide to Spacecraft Communications training event designed to support the European Students Earth Orbiter (ESEO) programme from the ESA Education Office. This will see the actual launch and in-orbit operations of a real satellite. Students participating in these training courses will, in fact, be the spacecraft operators!

“The memory of this unforgettable week of the training course will always be really close to my heart,” said a Hungarian student from Budapest University of Technology and Economics. “We could evolve a lot professionally because we were taught by a distinguished ESA expert with whose help we could take a glimpse into the details of spacecraft operation with special regard on the communicational parts, which useful knowledge gives us more insight in the communication process of our own satellites. Furthermore, I was given with the opportunity to meet those enthusiastic students who also have been working on a space project, and the friendships that were made there will be so valuable for me in my future.”

Also in attendance were students from the Fly Your Satellite! (FYS) CubeSat programme of the ESA Education Office. They were gaining knowledge to help them prepare their miniature satellites, and develop their ground station and operations concepts. Attendees of this course are now able to relay the information to their ESEO or FYS team mates as they continue their projects, thus widening the influence of the training.

The overall objective of this latest course was to acquaint participants with the fundamental concepts behind spacecraft telecommunications. A “Ladybird approach” was taken, meaning that ideas were explained using concrete real-life examples and accessible diagrams, rather than emphasising analytical and mathematical skills. In this way, it is hoped that the gap between spacecraft operators and telecommunications designers can be addressed; usually designers find it very challenging to “think as operators”, but in this course the operators’ points of view are central to designing a ground station of spacecraft telecommunications subsystems. In the words of a Spanish student from KTH Royal Institute of Technology: “Without going into mathematical details, the course is an excellent and stimulating introduction to spacecraft communications. All the real-life stories about satellite operations were captivating and made it a lot easier to understand such complex systems.”

The course trainer has many years of experience with spacecraft operations. As such, the teaching approach was oriented in bringing actual examples of spacecraft missions and real operational scenarios. Students were challenged with quizzes to bring them as close as possible to actual problems that can arise during spacecraft missions! The participants were even split into three teams – Alamouti, WASP, and Sud'ba – for a group exercise. Each team had to produce a “Ladybird design” for a spacecraft that they then operated on the final day in a virtual spacecraft communications scenario. All three teams performed admirably in this simulation, and successfully put into practice all they had learned during their training.

With their certificate of participation and course transcript, the students will claim ECTS credit(s) from their home universities.

During a break from the hard work, students visited ESEC-Redu with three different Operations Engineers. They saw the PROBA Operations Room and received insights on how ESEC-Redu communicates with the PROBA satellite. They also visited the Baseband Equipment Room, as well as inside the Redu 1 antenna, which is a 15-metre diameter dish. Visiting an operational ground station meant that the students could quiz the on-site engineers for their advice! While there, the students witnessed the passage of a PROBA satellite, gaining valuable insight for their own projects.

An Italian student from the University of Bologna summarises their thoughts: “The greatest benefits that have been provided to humanity, both in technological and social-political terms, derive from the funding of aeronautical and aerospace sectors. For this reason, ESA is one of the most important achievements of Humanity. The European Space Agency unites the efforts of 22 Nations, which share energies, knowledge, technology and human resources in order to obtain a greater good. The ESA Academy - ESEO & FYS Program Ladybird Guide to Spacecraft Communications was for me the perfect representation of this spirit of sharing and technological development. The course provides the opportunity to cooperate closely with students from all over Europe, to share experiences and acquire new knowledge, learning how to work as a team and to organise themselves as efficiently as possible in order to complete an assigned task, which in the near future will represent the working reality which we must approach in the Aerospace Sector. It's not just schooling, it's education, it's ESA Education.”