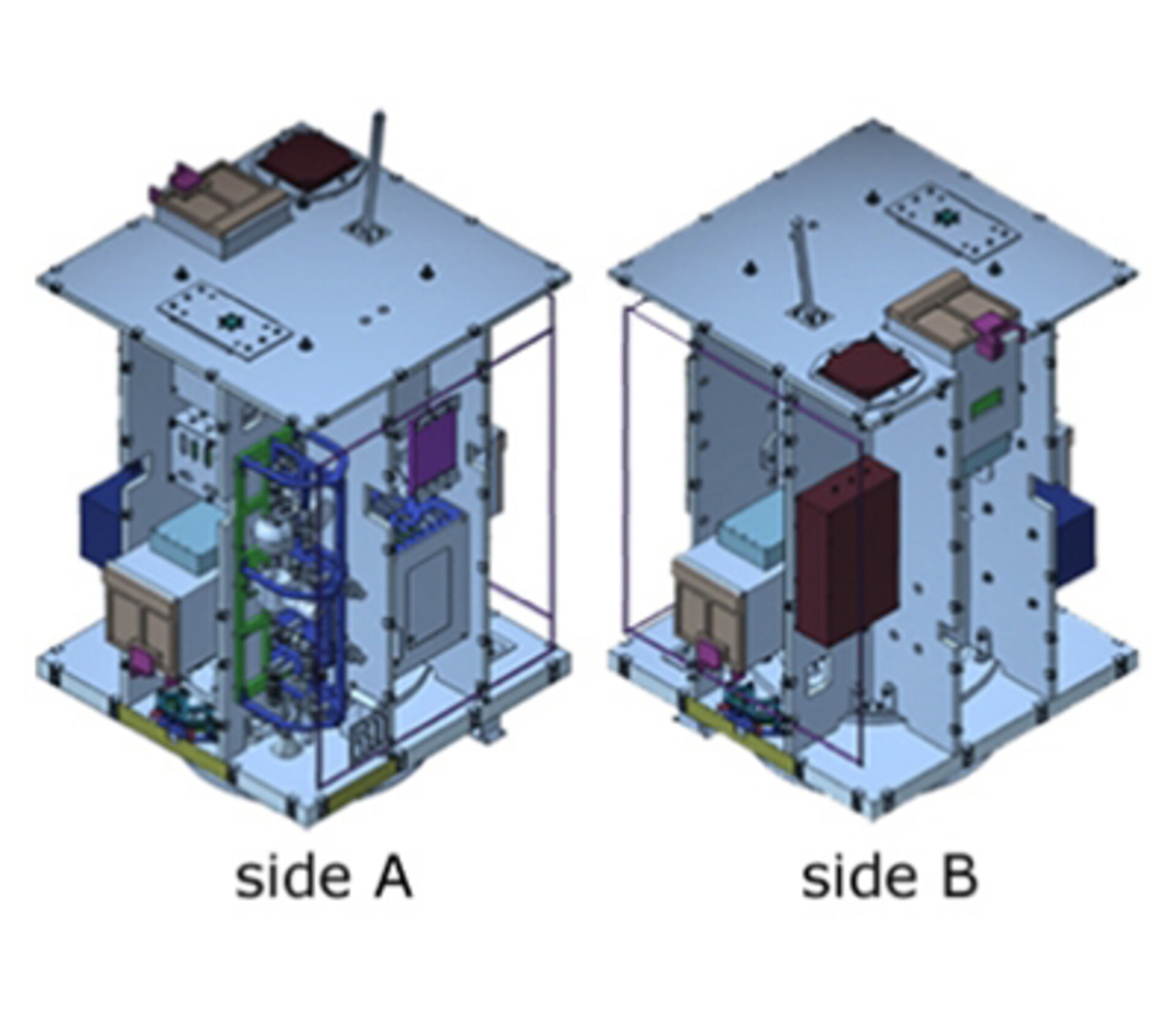 The Attitude Determination and Control System (ADCS) has two parts. The Attitude Control System uses semi-active magnetic stabilisation. A pair of magnetorquers provide detumbling functionality and actively damp any subsequent vibrations, while a passive magnet ensures alignment of the spacecraft’s z-axis with the Earth’s magnetic field.

The attitude of the spacecraft is therefore stabilised about two axes with one remaining, but fully characterised, degree of freedom about the z-axis. The pointing error is expected to be lower than five degrees. The Attitude Determination System consists of a pair of sun-sensors and a three-axis magnetometer, allowing determination of the attitude with respect to the magnetic field lines of the Earth and the Sun.

The on-board camera (CAM) is based on a colour complementary metal oxide semiconductor (CMOS) sensor and an instrument control unit. In order to adjust for varying brightness, the camera can be fully calibrated in orbit. It is adapted from the AAUSAT-1 pico-satellite mission.

The optical section of the camera consists of a specifically designed and manufactured lens system constructed of radiation-hardened glass. The ground resolution of the camera is about 100 m per pixel, with an image size of 1280 by 1024 pixels.

The Electrical Power System (EPS) is based on the concept of power generation by body-mounted photo-voltaic cells. The energy is stored in a rechargeable Lithium-ion battery to ensure power is available during eclipse phases or during periods of low sunlight, when there may be insufficient power input from the solar cells. Each of the other subsystems is supplied by dedicated power lines from a regulated 28 V power bus.

Ten separate strings, each of 15 triple-junction Gallium-Arsenide (Ga-As) photo-voltaic cells with an estimated efficiency of around 22%, are used. They are mounted on the four lateral sides of the spacecraft, each of which is covered by approximately 100 cm2 of solar cells.

The Propulsion Instrument Control unit is affectionately referred to as the 'Magic' box. This sub-system processes commands related to the propulsion system, controls the thruster valves and performs data acquisition from the various thermistors and pressure transducers. It is also designed to provide a high current pulse to detonate the pyrotechnic valve.

The On-Board Computer (OBC) controls the spacecraft during nominal and payload operations and collects all telemetry and payload data for subsequent transfer to the ground. Commands can be uplinked into the computer’s flight plan from the ground stations via the UHF radio communication system. At its core is an AMTEL ARM 7 processor. The surrounding hardware and software architecture was entirely student-designed.

The propulsion (PROP) payload is an attitude control cold-gas system with four low-pressure thrusters, fed by a pressure regulation system. The tank (derived originally from fire-fighter air tanks) contains six litres of gaseous nitrogen at a pressure of 300 bar. Pressure is managed by a series of valves and regulators and secured for safety during the launch by a pyrotechnic valve. These components are connected by stainless-steel high-pressure tubing. The PROP on SSETI Express will not actually be used for attitude control. It is there to allow students to learn how to operate it prior to the ESEO mission on which it will be the main attitude control.

The S-band patch antennas (S-Band ANT) are adapted from the ESEO microsatellite. A set of three directional patch antennas are used, outputting a total of 3 watts of circularly polarised radiation at 2401.84 MHz. The half-power beam width is approximately 70 degrees. The main lobes are directed along the spacecraft’s z-axis, which will face nadir during transit of most of the northern hemisphere, and along the spacecraft’s positive and negative x-axis.

Radio amateurs from the United Kingdom have developed the S-Band transmitter (S-Band TX). It serves a dual function providing both high-speed mission data downlink at 38 400 bps and also, in combination with the UHF system, a single-channel audio transponder which will be freely available to the global amateur radio community whenever the other payloads are not in use.

The primary load-bearing spacecraft structure (STRU) consists of aluminium honeycomb panels configured in a similar way to the game known as tic-tac-toe or noughts and crosses. The secondary structure consists of 1 mm aluminium outer lateral panels, serving as mounting surfaces for the solar cells, sun-sensors and other lightweight equipment.

A titanium ring inside the structure ensures proper load distribution onto the launch adapter. Aluminium inserts glued into the honeycomb panels provide mounting points. The structure team is also in charge of designing the configuration of all subsystems with respect to balance, mass distribution, harnessing and thermal issues.

Each of the three Tokyo Pico-satellite Orbital Deployers (T-PODs) will be used to store a passenger CubeSat during the launch and to deploy them from SSETI Express once orbit is achieved. They have an interface to the ground support equipment that allows the CubeSat passengers to be charged and arms the release mechanism.

The Ultra-High Frequency (UHF) unit contains a radio and a Terminal Node Controller (TNC) and is the spacecraft’s primary communications system. It provides uplink of telecommands from the ground station, audio uplink from amateur radio users and downlink of mission data at 9600 bps, all via a top-mounted rigid monopole antenna.