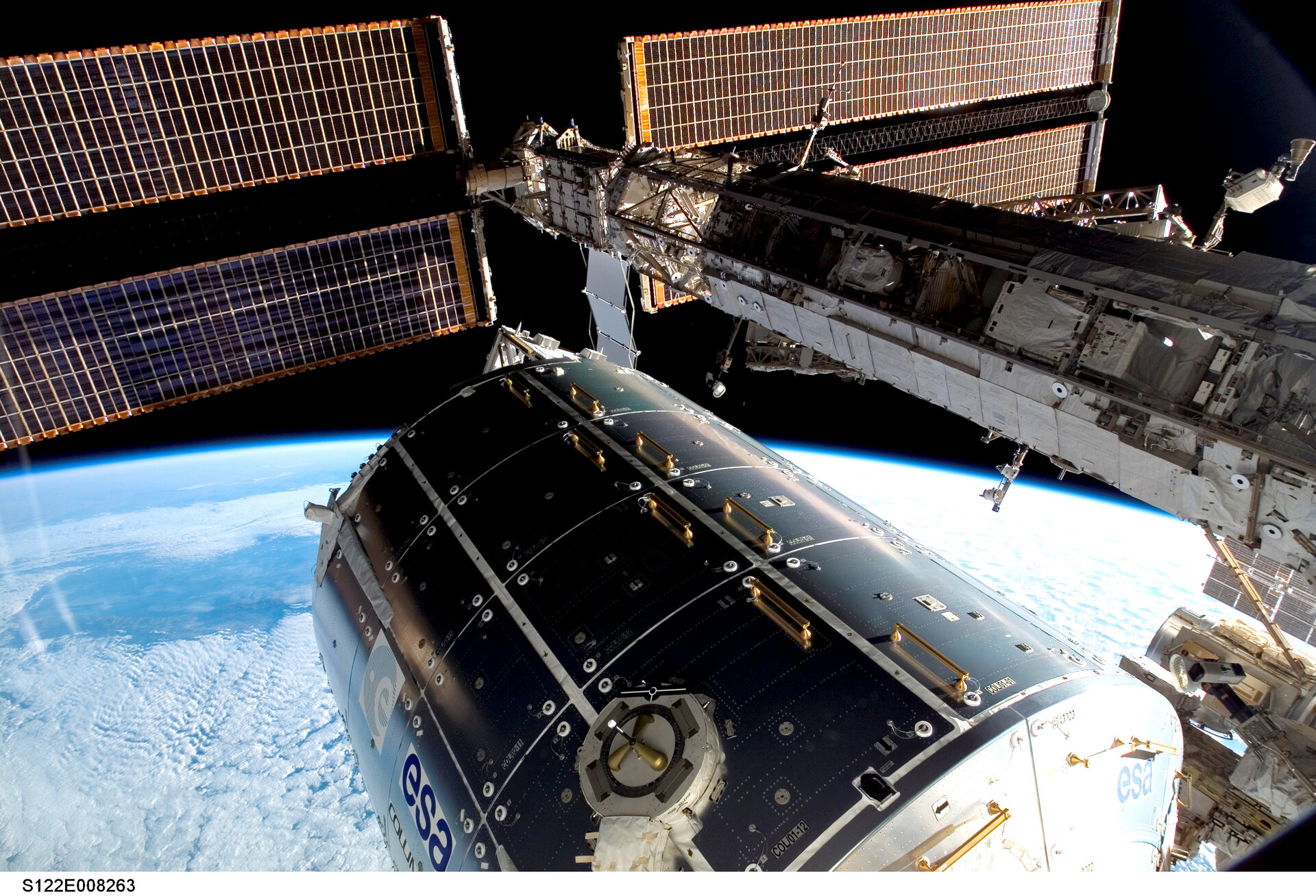 Four days after launch from NASA's Kennedy Space Center on 7 February 2008, ESA's Columbus science laboratory was docked to the ISS. At 22:44 CET (21:44 UT) on 11 February 2008, NASA astronaut and ISS Commander Peggy Whitson together with ESA astronauts Hans Schlegel and Leopold Eyharts initiated final capture of the newly delivered module, firmly attaching it to the starboard side of the Node 2 module.

From that moment on, Columbus has served as Europe's first permanent human outpost in orbit and Europe has become a full partner of the International Space Station (ISS).

Within the first year of operation, two Human Research Facilities under NASA responsibility were moved into Columbus. The Solar Observatory was carried separately in the cargo bay of the Shuttle and is now mounted on Columbus’s external platform. Other external experiments were added in recent years.

Inaugurated in 2004 under contract from ESA, the Columbus Control Centre (Col-CC), located at the German Aerospace Center (DLR) facility in Oberpfaffenhofen, Germany, works closely with the other ISS control centres including Houston and Moscow. Under the call sign 'Munich', Col-CC is responsible for all Columbus systems and for European science activities on board the ISS. Col-CC control teams began their operational activities as a precursor to Columbus operations during ESA's Astrolab mission to the ISS in 2006.

The primary mission of the Columbus Flight Control Team (FCT) is commanding, monitoring and controlling the Columbus module subsystems so as to support the astronauts working in space.

The Flight Control Team consists of several engineers with individual specific tasks working under the leadership of the on-shift Columbus Flight Director (COL FD). The COL FD is in direct contact with the flight directors at the other ISS Mission Control Centres (MCCs) in Houston and Moscow, with the Ground Operations and Engineering teams at Col-CC, and with ESA Operations Management. In Col-CC back rooms, planners are on stand by to support the FCT.

For crew medical matters, the COL FD is in contact with ESA's Crew Medical Support Office at the European Astronaut Centre (EAC), Cologne, Germany. EAC also dispatches ‘Eurocom’ mission controllers to the Flight Control Team, who maintain voice contact with the ISS crew and communicate all necessary information prepared by the FCT.

Beyond the daily operations activities at Col-CC, specific payload operations are the responsibility of the User Support and Operations Centres (USOCs) distributed throughout Europe, which, after receiving the 'Go' from Col-CC, can access their experiments in Columbus directly.

Four ESA Mission Directors (ESA MD) rotate on shift directing day-to-day operations to comply with ESA's predefined programme requirements. As single point of direction for the Flight Control Teams, they have overall responsibility for Columbus operations and the last word on any decisions.

The three main tasks of Col-CC are:

One of the flight control rooms is used for actual operations, while the other is used for operations preparation, training and simulations (one of these rooms is shown in the image on this page).

The control rooms are equipped with console workstations, which allow direct access to the real-time status of all Columbus telemetry parameters as well as to data and video channels to and from the ISS. Real-time operations are conducted 24 hours/day, 7 days/week with three daily shifts of 9 hours each. Shifts overlap by 30 minutes to enable in-person handover of critical information.

Each day, the Columbus module relies on resources provided from the ISS, such as power, thermal control and air regeneration. Therefore, a major focus of the Flight Control Team is ensuring acceptable conditions of the module's subsystems at all times.

Typical tasks for each day's shift in Col-CC include:

All system anomalies or failures are analysed not only by the Flight Control Team but also by an Engineering Support Team (EST).

The EST comprises experts from the industrial partners that developed Columbus and its various module subsystems. For payload anomalies, the individual Science Centres lead the diagnosis and correction efforts. The Flight Control Team at Col-CC is responsible for coordinating and implementing the resulting corrective actions.

In comparison to NASA and Russia, the European ISS infrastructure is much more decentralised and is based on seven Science Centres (USOCs) located in those European countries that contribute to ESA's Human Spaceflight Programme.

Depending on the scientific programme planned by the USOCs, Col-CC must integrate and coordinate activities to ensure that hardware, software, communications and astronaut time are all available as scheduled to perform the required experiments. Col-CC must also coordinate payload operations with the other ISS control centres.

The Columbus FCT is responsible for enabling a specific experiment's operation and for maintaining contact with the ISS Payload Operations Center, Huntsville, Alabama, USA, during NASA experiments taking place in Columbus.

The seven USOCs are the contact points for the European scientists conducting experiments on the ISS. The USOCs support preparations and provide working places for the monitoring and control of the experiments.

Commands issued from the USOCs are transmitted via ESA's Interconnecting Ground Segment network (IGS) to Col-CC and thence to Houston and up to Columbus via NASA data relay satellites. The reverse channel is used to receive telemetry, video and scientific data from Columbus.

On Earth, the ESA-owned European Interconnecting Ground Segment network (IGS) connects Col-CC with the other ISS control centres. This network must offer high reliability, which is the responsibility of the Col-CC controllers, who operate the network 24 hours/day in shift teams.

All communications between Col-CC and the ISS are first transmitted and received via NASA's MCC in Houston (for systems and telemetry data) and the ISS Payload Operations Centre in Huntsville (for scientific data). From there, signals are transmitted via NASA ground stations at White Sands, New Mexico, via NASA’s Tracking and Data Relay Satellite System (TDRSS), orbiting at an altitude of 35 000 km, to the ISS.