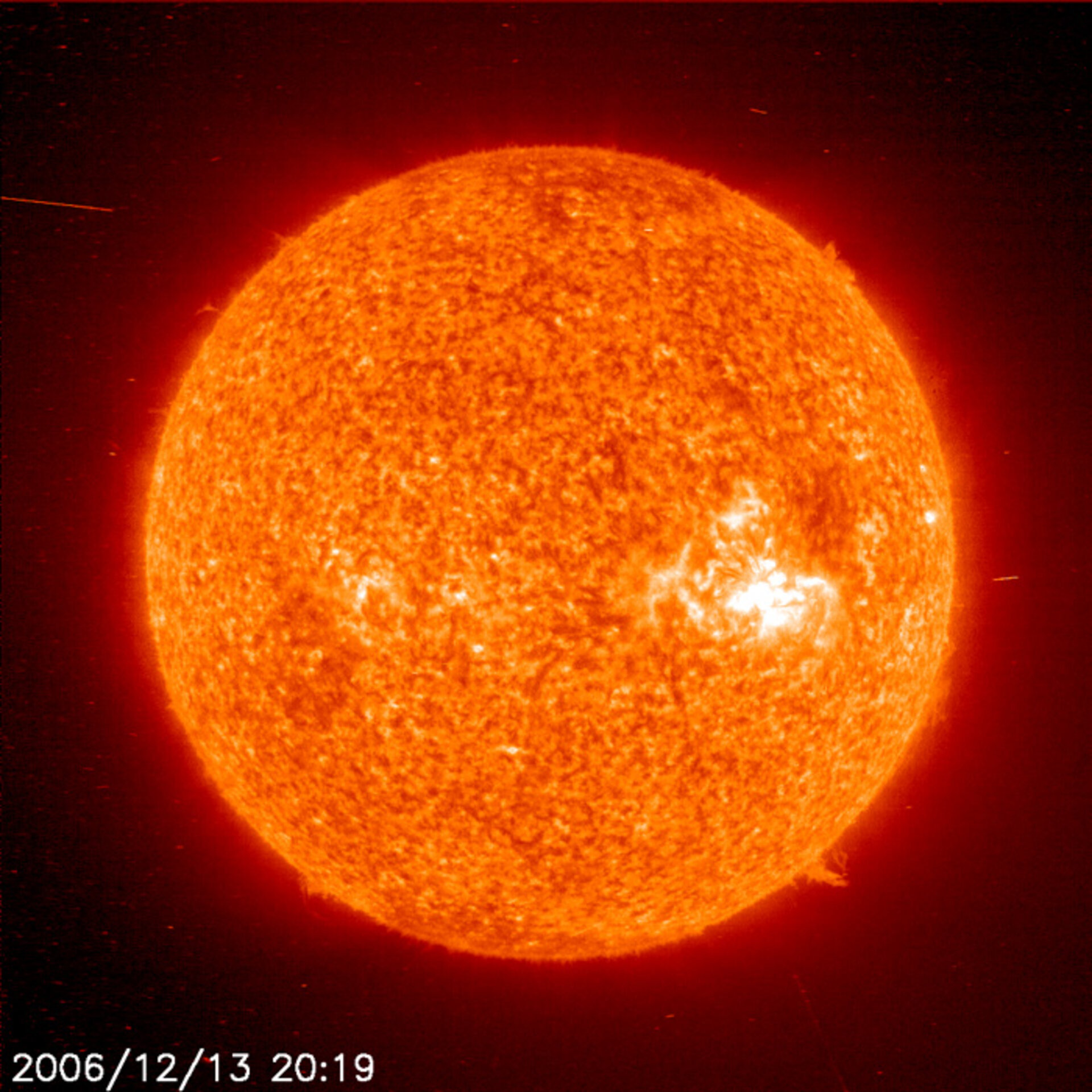 An energetic storm on the Sun has forced ESA mission controllers to react to anomalies or take action to avoid damage to spacecraft. Several missions, including Integral, Cluster and Envisat, felt the storm's effects, highlighting the need for ESA's ongoing development of space weather forecasting tools.

The LASCO (Large Angle and Spectrometric Coronagraph Experiment) instrument on board SOHO detected a powerful coronal mass ejection (CME) generated by the storm; the CME - a stream of fast-moving atomic particles - was directed towards Earth. The flare also generated X-rays.

The coronal mass ejection came during a week of intense solar activity that is not yet over. An additional peak event occurred during the night of 14 December, and ground controllers on several ESA missions have reported varying effects on their spacecraft.

Four-spacecraft Cluster II mission was one of the most affected

"We saw three anomalies on 13 December. Cluster 1 had a minor instrument anomaly, while Cluster 2 and 4 had on-board systems affected," says Juergen Volpp, Spacecraft Operations Manager for Cluster at ESA's Space Operations Centre (ESOC) in Germany. "The Attitude and Orbit Control unit on Cluster 2 lost power and autonomously switched over to its redundant unit, while the High-Power Amplifier on Cluster 4 switched itself off. This was a new occurrence which we hadn't seen before," he said.

"When you have a burst, the flux of very fast charged particles increases dramatically. This can cause discharges in electronic components - the so-called 'single-event upsets' - on the spacecraft, as well as damage or loss of data in solid-state memories," says Volpp.

Volpp says he can't be certain that the increased energetic particle flux triggered the anomalies, but their occurrence is strongly correlated with the timing of the peak burst on 13 December. He expects the mission to be operating normally again in a few days.

"Operation of the Envisat Payload Module Computer was autonomously suspended, causing all payload instruments to be switched off. It happened around 19:00 CET, just before the particle peak on the 13th," said Frank Diekmann, Spacecraft Operations Manager for Envisat. "We are still in a period of very high solar activity," he added.

Controllers working on Integral had perhaps the best sense of the recent solar activity - two of the mission's four instruments include the JEM-X and IBIS experiments, sensitive to X-rays and charged particles, respectively. However, they also had to take the most proactive action to avoid damage to the spacecraft's sensitive sensors.

The flurry of activity for controllers working on ESA missions orbiting in the region of the Earth was a direct result of Thursday's coronal mass ejection heading more or less directly towards our planet.

"The mass ejection headed from the Sun to Earth and our planetary missions, on the other hand, weren't affected," explains Paolo Ferri, Head of the Solar and Planetary Missions Division at ESOC.

Ferri says that CME events are highly directional, and that by chance all three of ESA's deep space missions, Mars Express, Venus Express and Rosetta, happen to be oriented on the side of the Sun opposite to the Earth right now. "Our interplanetary spacecraft didn't see anything," he adds.

However, radio signals transmitted from the three deep space missions must pass by the Sun to reach Earth, and so flight control teams could in fact notice the increased solar activity as higher-than-normal interference in the signals received on the ground.

We are still in a period of very high solar activity.

The recent solar activity highlights the ongoing need for accurate space weather forecasting and warning systems, so that spacecraft operators can take action to protect instruments and systems hours or even minutes before a peak of radiation or particles passes.

ESOC's Advanced Mission Concepts and Technologies office is working with UNINOVA (Institute for the Development of New Technologies), an academic institute in Caparica, Portugal, and Deimos Engenharia, a private company, in Lisbon, Portugal, to develop automated tools that can assess and eventually forecast space weather.

The Space Environment Information System for Operations (SEISOP), now in use at ESOC, has been tracking this month's solar activity based on data gathered from numerous participating ground observatories as well as spacecraft including Integral, Envisat, XMM-Newton and NASA's GOES (Geostationary Operational Environmental Satellite) spacecraft.

"By monitoring reports generated by SEISOP, we can estimate when solar fluxes will reach the Earth, which can vary from a few hours to a few days from the time of a solar flare," says Federico Di Marco, a flight engineer working on Integral, the reference mission for the new SEISOP tool.

His colleague Orlane Bergogne, also on the Integral team, produces a Radiation Assessment generated by SEISOP, showing X-ray and particle fluxes for the month of December.

"The current solar activity actually began on 5 December, and we could already see effects on Integral on 6 December. Eventually, we aim to develop SEISOP into a tool that can issue warnings and alerts to any mission operator, which will be particularly valuable to spacecraft that don't have their own radiation sensors on board," she says.

As reported on the SOHO mission site, the Sun unleashed a large (X-3 class) solar flare this week on 13 December 2006, along with a coronal mass ejection that headed towards Earth. Solar flares are classified as A, B, C, M, or X, with the "X" category ranked as the strongest, based on peak flux, or particle density.

The source of this week's eruptions was the very active sunspot region 930. A shower of high-energy particles appeared as specks and white streaks on the imagers aboard SOHO; the CME particles travel at speeds of up to several thousand kilometres per second.

When the charged CME particles arrive at Earth, they can cause a variety of disruptions, affecting communication and navigation networks, telephone systems and broadcasts.

On 14 December, China's People's Daily reported widespread disruption of shortwave radio communications in China on Wednesday morning. Astronauts on board the International Space Station slept in protected areas of the station as a precaution.