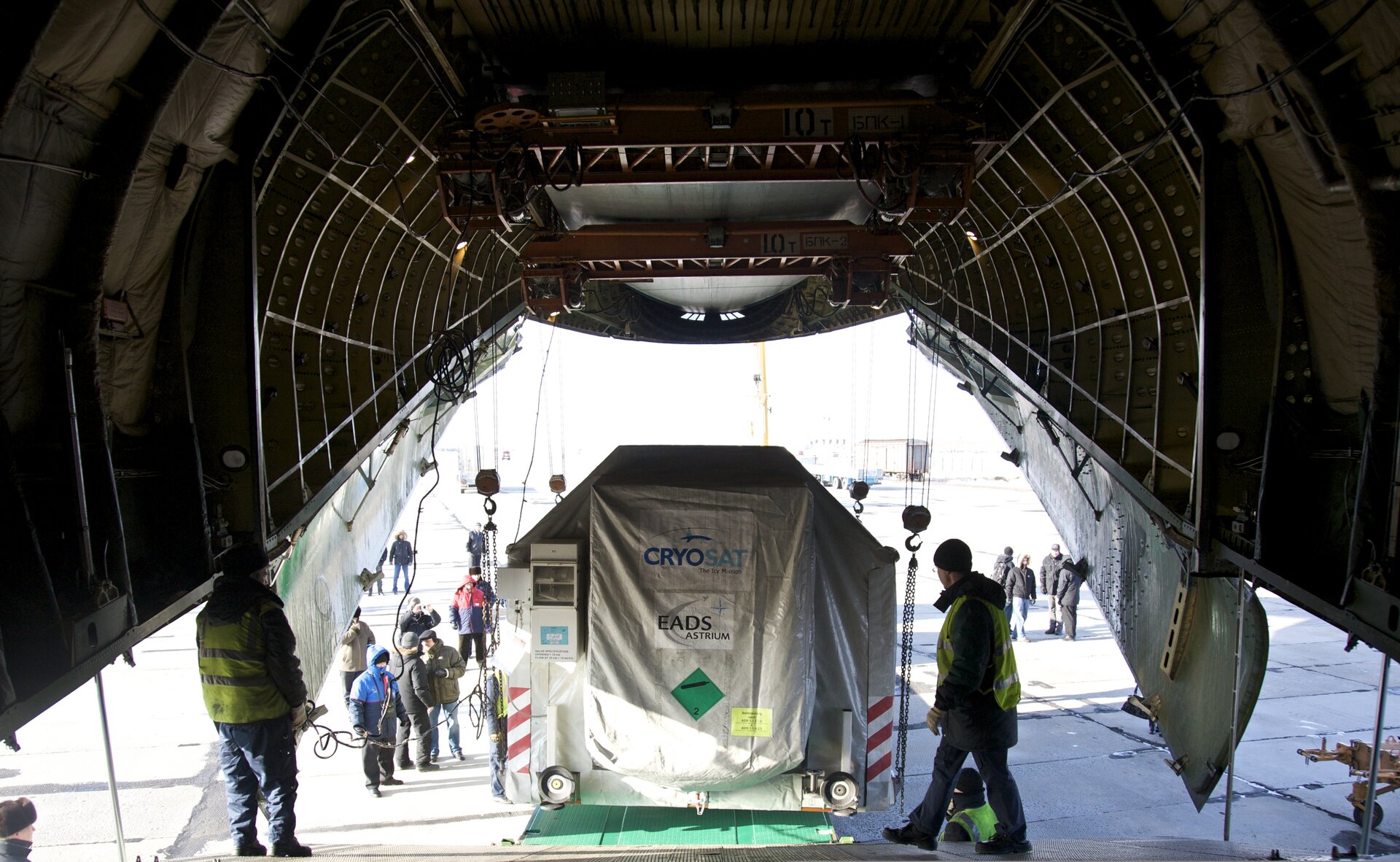 In what might seem rather appropriate weather conditions, the CryoSat-2 Earth Explorer satellite has completed its journey to the Baikonur launch site in Kazakhstan, where it will be prepared for launch on 25 February.

The satellite and support equipment left the 'IABG' test centre in Ottobrunn, Germany, by lorry on 12 January. The CryoSat mission is dedicated to precise monitoring of the changes in the thickness of marine ice floating in the polar oceans and variations in the thickness of the vast ice sheets that overlay Greenland and Antarctica. With much of Europe still in the grip of one of the coldest winters for some years, the icy conditions aptly set the stage for this first leg of CryoSat-2's journey.

After arriving at Munich airport, the containers were loaded onto an Antonov aircraft. Along with team members from ESA and their industrial partner for CryoSat-2, EADS-Astrium, the Antonov took off in the early evening bound for Ulyanovsk, a city some 900 km east of Moscow, Russia. Once through customs clearance at Ulyanovsk, the aircraft continued the journey to the Baikonur Cosmodrome.

The weather was –12°C and fine on arrival. Safely cocooned in its thermally controlled container, CryoSat-2 and accompanying cargo were offloaded and moved to the integration facility. The launch campaign team will now spend the next six weeks preparing the satellite for launch. CryoSat-2 will be launched by a Dnepr rocket – a converted intercontinental ballistic missile – on 25 February at 14:57 CET (13:57 UT).

With the effects of a changing climate fast becoming apparent, particularly in the polar regions, it is increasingly important to understand exactly how Earth’s ice fields are responding. Diminishing ice cover is frequently cited as an early casualty of global warming and because ice, in turn, plays an important role regulating climate and sea level, the consequences of change are far-reaching.

In order to understand fully how climate change is affecting these remote but sensitive regions, there remains an urgent need to determine exactly how the thickness of the ice, both on land and floating in the sea, is changing. By addressing this challenge, the data delivered by the CryoSat mission will complete the picture and lead to a better understanding of the role ice plays in the Earth system.

Following on from GOCE and SMOS, CryoSat-2 will be the third of ESA’s Earth Explorers launched within 12 months, marking a significant step in ESA’s dedication to improving our understanding of the Earth system.