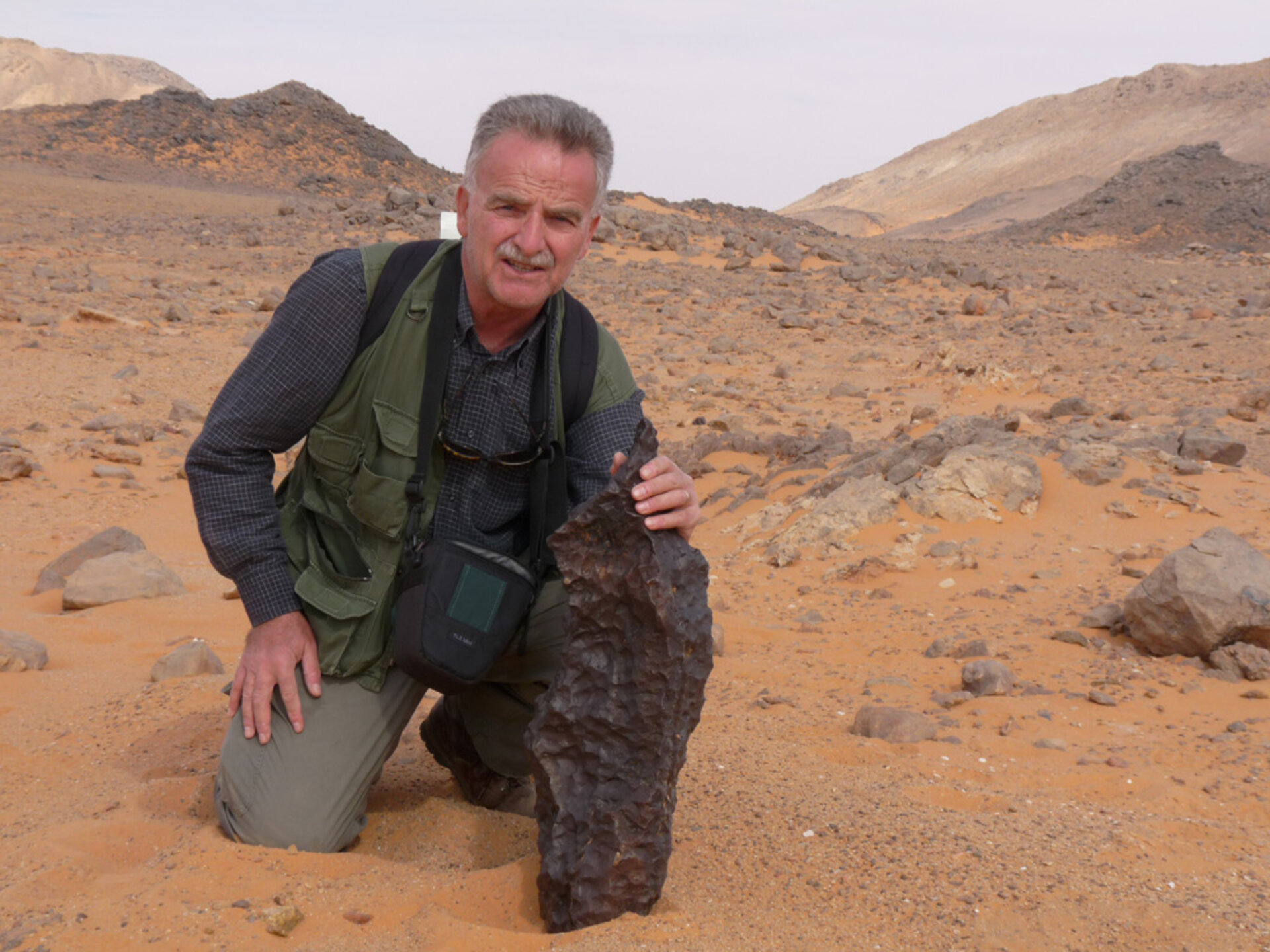 A 2008 Google Earth search led to the discovery of Kamil crater, one of the best-preserved meteorite impact sites ever found. Earlier this year, a gritty, sand-blown expedition reached the site deep in the Egyptian desert to collect iron debris and determine the crater's age and origins.

One day within the last several thousand years, a rare metallic meteorite travelling over 12 000 km/hour smashed into Earth's surface near what is today the trackless border region between Egypt, Sudan and Libya. The impact of the 1.3 m, 10-tonne chunk of iron generated a fireball and plume that would have been visible over 1000 km away, and drilled a hole 16 m deep and 45 m wide into the rocky terrain.

Since then, the crater had sat undisturbed by Earth's geologic and climatic processes, which usually render all but the very largest terrestrial impact craters invisible. It was also, as far as is recorded, unseen by humans.

Searching for craters in Google Earth

But that changed in 2008, when the crater was spotted during a Google Earth study conducted by mineralologist Vincenzo De Michele, then with the Civico Museo di Storia Naturale in Milan, Italy. He was searching for natural features, when by chance he saw the rounded impact crater on his PC screen.

De Michele contacted an astrophysicist, Dr Mario Di Martino, at the INAF (National Institute for Astrophysics) observatory in Turin, who, together with Dr Luigi Folco, of Siena's Museo Nazionale dell'Antartide, organised an expedition to the site in February this year.

It took over a year to plan and obtain permissions for the journey; in the meantime, and in collaboration with Telespazio, e-Geos and the Italian space agency ASI, the Kamil region was analysed using satellite data and in particular high-resolution radar images provided by the ASI-operated COSMO-SkyMed satellite constellation.

Expedition to the Egyptian desert

The two-week, 40-person expedition included Egyptian and Italian scientists, as well as numerous local support workers, and was conducted as part of the 2009 Italian-Egyptian Year of Science and Technology (EISY). It was also supported with funding by ESA's Space Situational Awareness (SSA) programme.

After a tiring, GPS-guided, three-day drive across the desert in 40°C heat, the team reached the crater.

They collected over 1000 kg of metallic meteorite fragments, including one 83-kg chunk thought to have split from the main meteorite body shortly before impact (it was found 200 m away from the crater). The joint team also conducted a thorough geological and topographical survey, using ground-penetrating radar to create a 3D digital terrain model. Geomagnetic and seismic surveys were also carried out.

The researchers were stunned to find that Kamil crater, named after a nearby rocky outcrop, remains pristine, and must have been created relatively recently.

"This demonstrates that metallic meteorites having a mass on the order of 10 tonnes do not break up in the atmosphere, and instead explode when they reach the ground and produce a crater," says ESA's Dr Detlef Koschny, Head of Near Earth Objects segment for the SSA programme.

Kamil crater has become the target of intense interest for geologists, astrophysicists and even archaeologists.

"We are still determining the geochronology of the impact site, but the crater is certainly less than ten thousand years old — and potentially less than a few thousand. The impact may even have been observed by humans, and archaeological investigations at nearby ancient settlements may help fix the date," says Dr Folco.

The data gathered during the expedition will be very useful to ESA's SSA activities for risk assessment of small asteroids with orbits that approach Earth, a category to which the Kamil impactor originally belonged.

The intriguing story of the Kamil crater discovery will be presented in a joint paper by Telespazio, e-Geos, ASI and INAF, 'Radar observation of impact craters using COSMOSkyMed' at the European Planetary Science Congress (EPSC) 19-25 September 2010, in Rome. A public and media outreach event, 'Kamil: a Lunar Crater on Earth', will be presented on 23 September at the University of Rome (more information here).