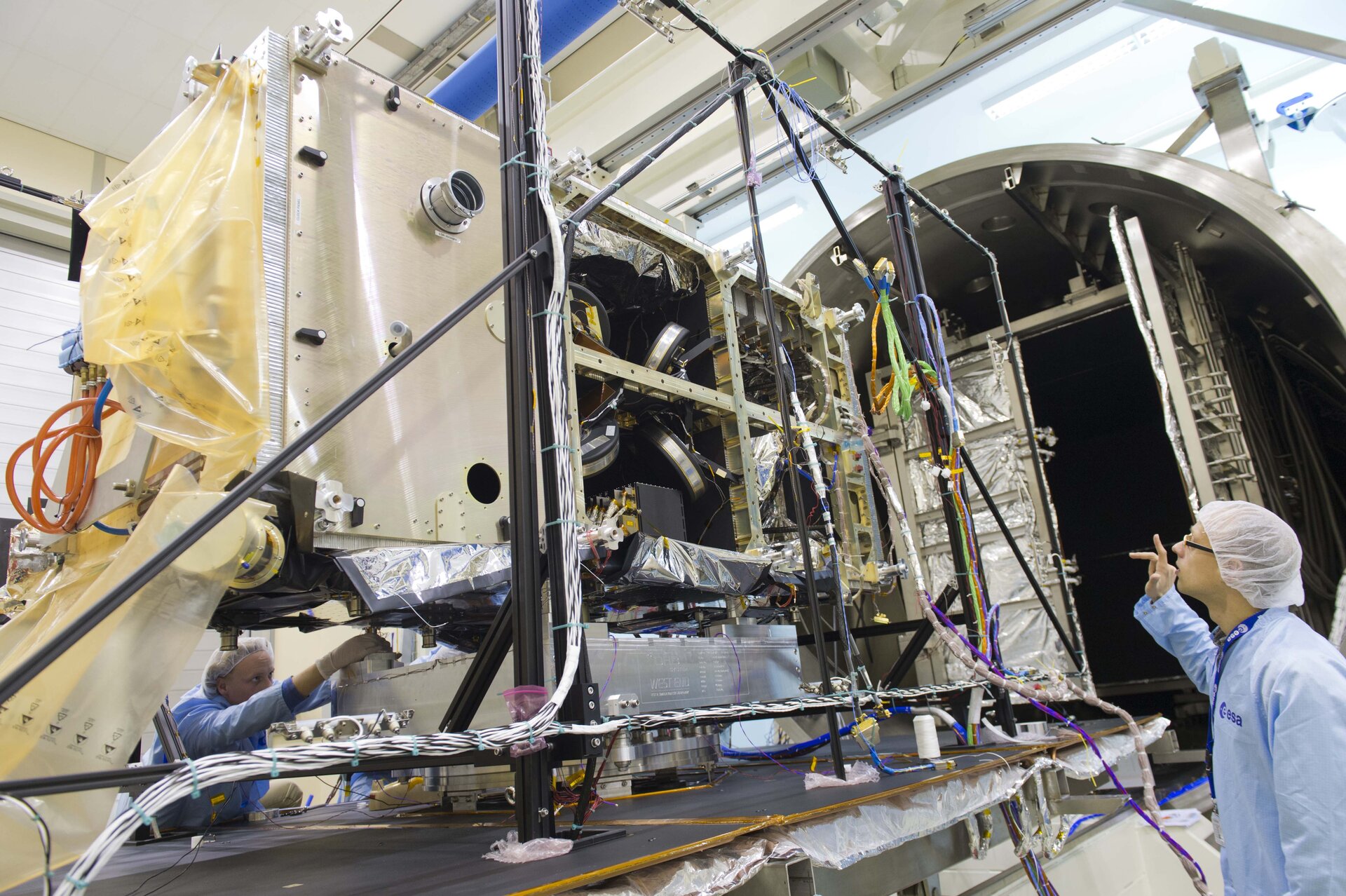 Phenix is a newly-installed thermal vacuum test chamber which replaces the Test Centre's HBF-3 facility, now dismounted. It performs similar testing to the Large Space Simulator (LSS) but on a smaller scale and without a solar simulator lamp.

The purpose of Phenix is to expose payloads, mechanisms or complete small spacecraft to representative space conditions – a vacuum state combined with repeated cycling between high and low thermal extremes – in order to assess their likely flight performance.

Heat transfer occurs differently in vacuum because convection is no longer possible in the absence of air. Hot parts of a structure such as electronic boards will remain warmer, cold parts such as extremities facing deep space will keep cooler and the resulting thermal gradients will be steeper, potentially inducing thermal deformation and stress.

The various elements of a satellite are designed to operate within set temperature parameters, governed by a thermal control subsystem, made of elements such as heat pipes, insulation blankets, heaters and radiators.

Thermal vacuum testing is the only way that a thermal control subsystem's performance and the consequent 'heat balance' of the satellite can be fully verified in advance of flight.

A system designed to enable synergistic testing based on the simultaneous combination of vacuum and thermal cycling, Phenix is made up of several different elements, all located within a class (ISO 8) clean room.

Its vacuum chamber measures 11.8 m long and 4.5 m in diameter, with access gained through a 4.5 m diameter sliding door as well as a smaller 2.5 m side door for manned access.

Additional cryopumps and cryopanels are then used to freeze any residual air out of the chamber – twin cryopumps with a pumping capability of litres each as well as a 10m2 condensing cryopanel.

Test items are slid via a trolley system into a thermal tent within the vacuum chamber. Measuring 4.2 m long by 2.5 m wide and 3 m high, the thermal tent is made of copper plates with brazed copper pipes which use liquid and gaseous nitrogen to produce the range of temperatures desired, from +100ºC to less than –170ºC.

The thermal tent is controlled from a Thermal Control Unit (TCU) which is fed with gaseous and liquid nitrogen and electrical power. The tent can absorb a maximum 600 watts on each face, with each one being independently controlled to produce distinct temperature zones. If the thermal tent is filled with liquid nitrogen, it can absorb over 30 kilowatts.

Its slope rate – the rate of temperature change – can be as large as 15ºC per hour. The shroud's overall temperature uniformity is better than 10ºC in gaseous nitrogen mode and 5ºC in liquid nitrogen mode and has a long-term stability better than 0.5ºC. The system is controlled on a turn-key basis from a customised Human Machine Interface able to produce data archives and trend charts, linked in turn to a Programmable Logic Controller (PLC) based on a Siemens S7-300 controller.

With the Large Space Simulator optimised for thermal vacuum testing of the largest payloads, Phenix performs similar testing for smaller scale systems and complete satellites, broadening the variety of services that the ESTEC Test Centre is able to offer.

Thermal vacuum testing is crucially important for spacecraft because it represents the closest possible replication of space conditions capable of being reproduced on the terrestrial surface, with prolonged testing serving to identify otherwise unknown defects in materials, processes and designs.