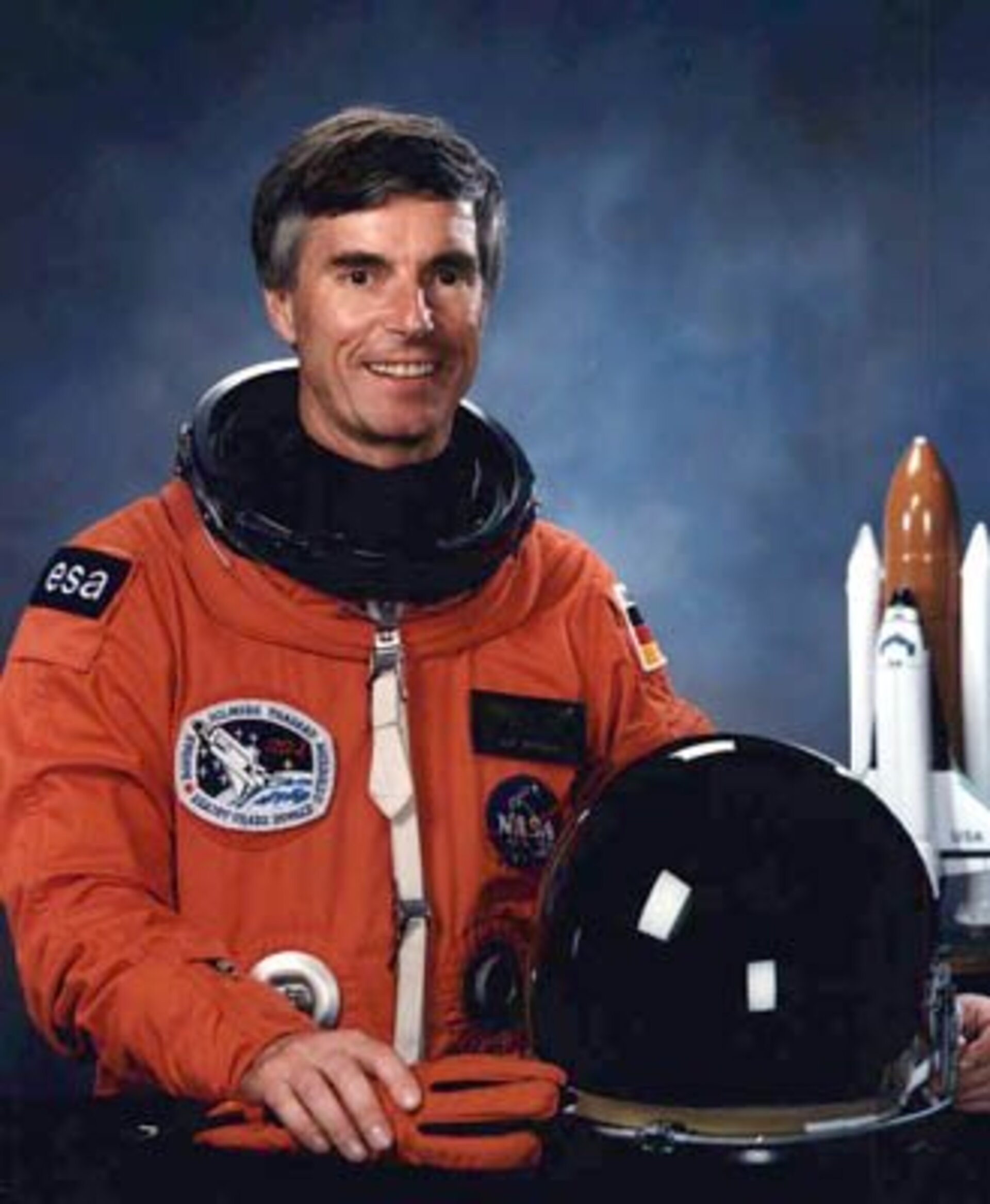 Born in Greiz, Germany, 20 June 1941 Ulf is married and has two children. He enjoys skiing, glider flying and piano playing.

Ulf Merbold graduated from Stuttgart University in 1968 with a diploma in physics. In 1976 he received a doctorate in Sciences (Dr.rer.nat.).

Ulf Merbold has received numerous awards, including the First Class Order of the Federal Republic of Germany, the Order of Merit of the States of Baden-Württemberg and Nordrhein-Westfalen, the Haley Space Flight Award of the American Institute of Aeronautics and Astronautics, the USSR Pilot-Cosmonaut V.M. Komarov diploma of the International Aeronautical Federation, and the distinction for scientific achievement in Air and Space Medicine from the Deutsche Gesellschaft für Luft- und Raumfahrtmedizin.

In 1983 he received the Flight Achievement Award of the American Astronautical Society and the "Order of Friendship" from President Yeltsin of the Russian Federation in 1995. The following year Ulf Merbold was awarded an honorary doctorate in engineering (Dr.-Ing. h.c.) by the Rheinisch-Westfalische Technische Hochschule.

After university, Ulf Merbold joined the Max-Planck-Institute for Metals Research in Stuttgart, first on the basis of a scholarship of the Max Planck Society and later as a staff member, where he studied state and low temperature physics, in particular experimental investigations of lattice defects in body-centered cubic metals.

In 1977, Ulf was pre-selected by ESA as a Payload Specialist for the first flight of the European-built Spacelab laboratory on the US Space Shuttle (Spacelab 1). A year later he was nominated as one of the three Payload Specialists for the mission and in 1982 was selected for flight by the ESA Director General, following a recommendation of the Principal Investigators (the scientists involved in the mission).

Ulf Merbold became the first non-American to fly on the Space Shuttle during the STS-9 mission (28 November to 8 December 1983). In 1984 he was involved in the Space Shuttle Spacelab German D-1 mission, as both back-up Payload Specialist and Crew Interface Coordinator (CIC).

Merbold transferred to the European Space Research and Technology Center (ESTEC) in Noordwijk, the Netherlands, in 1986 to support ESA in the planning of Columbus, the European laboratory for the International Space Station.

He was appointed Head of the DLR (German Aerospace Research Establishment) Astronaut Office in 1987 and, on the basis of a secondment to DLR, led the German astronauts and supported the preparation of the D2 mission. In December 1988 he was nominated as ESA Payload Specialist candidate for the International Microgravity Laboratory mission (IML-1) on the Space Shuttle.

The IML-1 (STS-42) training programme started in April 1989 and the following January he was selected to fly as Payload Specialist on the mission which took place between 22 and 31 January 1992. During the second German D2 mission from 26 April to 6 May 1993, Ulf Merbold was Science Coordinator at the Mission Control Center in Germany.

In August 1993, after preparatory courses at the European Astronaut Centre (EAC), he started training at TsPK (Cosmonauts Training Centre) in Star City near Moscow. He was selected for flight (Crew 1) for ESA's Euromir 94 mission and became the first ESA astronaut to fly on the Russian space station Mir, carrying out a 32-day mission between 3 October and 4 November, 1994.

Between 1999 and 2004 Ulf Merbold was responsible for the Utilisation Promotion Management in the Microgravity Promotion Division of the ESA Directorate of Manned Spaceflight and Microgravity, at ESTEC, Noordwijk, the Netherlands. Merbold holds a commercial pilots license (CPL2) with Instrument Rating, as well as an Acrobatic license, and has logged more than 3000 hours as Pilot in Command.

Ulf Merbold flew on STS-9 (28 November to 8 December 1983) and became the first non-American to fly on a Space Shuttle mission. The primary objective of this mission was the verification of Spacelab in orbit and the execution of 72 highly sophisticated scientific experiments.

He was ESA's Payload Specialist on STS-42 (22 January - 31 January 1992), the International Microgravity Laboratory mission (IML-1) on the Space Shuttle. As a member of the payload crew he was primarily responsible for the 55 scientific experiments on the flight.

Merbold was selected to fly with ESA's Euromir 94 mission (3 October - 4 November 1994) to the Russian Space Station MIR. He was the first ESA astronaut to fly on a Russian mission and performed a 32-day mission as Research Cosmonaut. He was responsible for the execution of 28 European experiments.