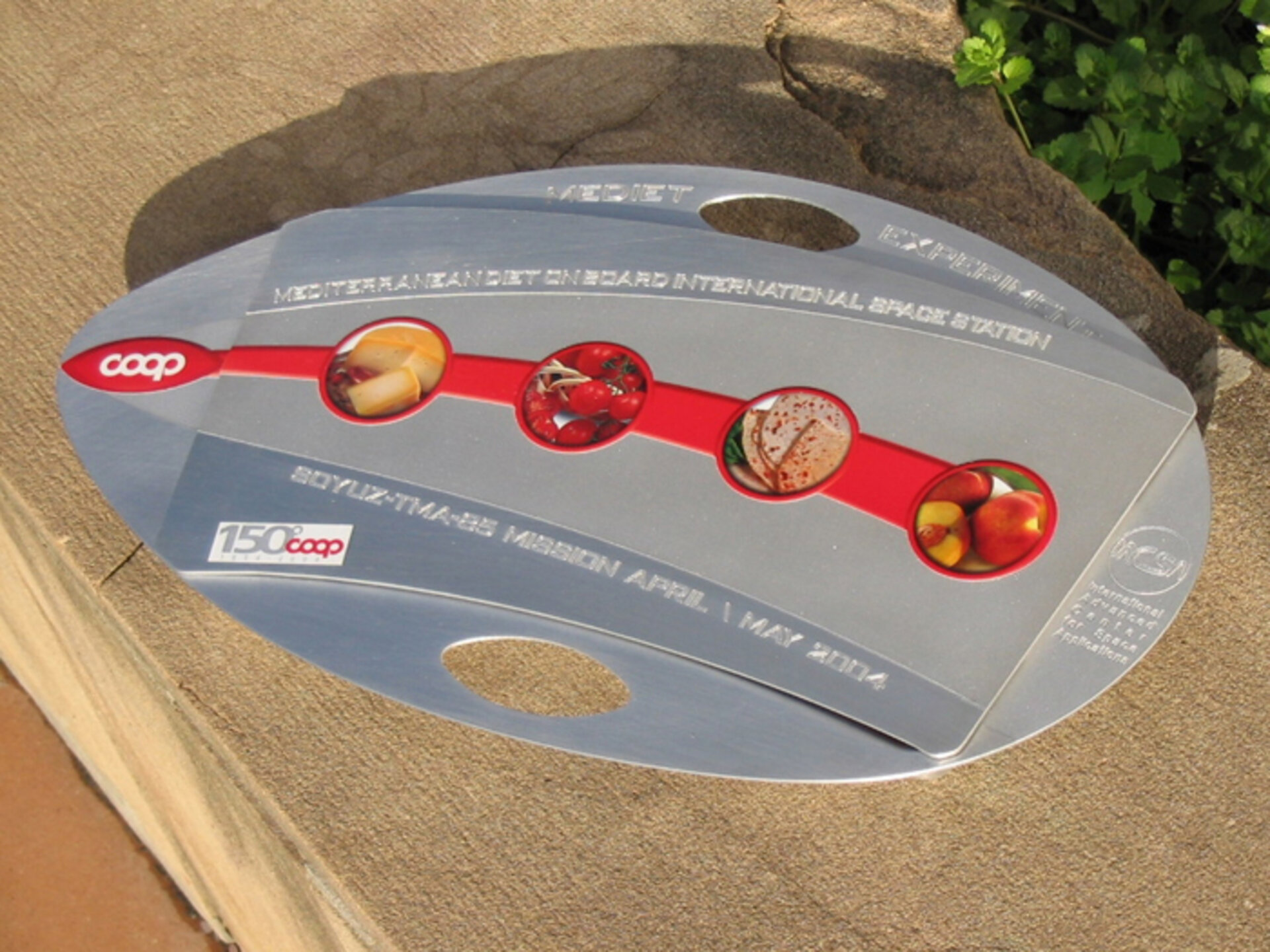 In parallel with the DELTA Mission, two Russian cosmonauts on the International Space Station (ISS) - Alexander Kaleri and Gennadi Padalka - will perform the Mediet (Mediterranean Diet) experiment, demonstrating the use of the Mediet food system on board the ISS.

The Mediet food, made from top quality Mediterranean products, will serve to demonstrate that the 'fast food' of the 21st century can be delicious and nutritious at the same time. The tray serves as a prototype of the system, which may be used in extreme environments on Earth, as well as during travelling, or simply when time for cooking, or a table to sit behind, are not available.

The food is important not only from the nutritional point of view. It is also a matter of psychological comfort – it's probably not so long ago that you last sat in front your TV with a tasty snack! Mediet sets an example of how various international food menus can be delivered to the ISS in order to increase the variety of food available for the Station's crew. During a long-term flight cosmonauts will benefit from having an additional variety of food, which adds a little extra in making them feel that the Station is their home during their six-month stay.

The experiment demonstrates the use of the Mediet food system on board ISS. The system consists of an ergonomic tray, made of aluminium, with five items of Mediterranean food from Italy: dried tomatoes, mature cheese, piadina bread (special Italian white bread), peaches and chocolate.

The food has not only successfully passed all mandatory tests for use on Earth, but has also been subjected to a number of special microbiological analyses, which are required for all the nutrients and food items delivered to the International Space Station.

The food is individually packaged for convenient consumption in special space flight qualified transparent plastic bags, and in meal-size portions. It is processed using the High Pressure Processing (4000-6000 atu) technology, which is able to eliminate enzymes and bacteria without altering the properties of fresh food. This new method of preservation provides reliable long-term storage at room temperature, and at the same time allows the food to retain nutritional values, taste, texture and colour.

The food inside the bags is either pre-cut into a bite-size pieces (cheese, bread and chocolate), or has such a viscosity that it remains intact in weightlessness: while the cosmonaut picks up a piece with a fork, the rest of the bag content remains in place (tomatoes in oil and peaches in jelly). The cosmonaut cuts open the bag with scissors, and uses a fork to take pieces out of the bag.

During the experiment, one cosmonaut will evaluate the quality of the food, considering such parameters as odour, flavour, texture, colour, and overall appearance. The second cosmonaut will make a video recording of the test. This video material may later be used to illustrate the benefits of the new technology to the expert community and to the general public.

The Mediet experiment is done within the framework of the European Space Agency commercialisation programme of the International Space Station under a contract between ESA and Federal Space Agency of the Russian Federation. The International Space Centre for Space Applications (IACSA), a R&D consortium of the University of Florence, which is dedicated to space design and architecture, has developed the system. COOP, one of the largest retail chains in Italy, has provided food for the experiment.