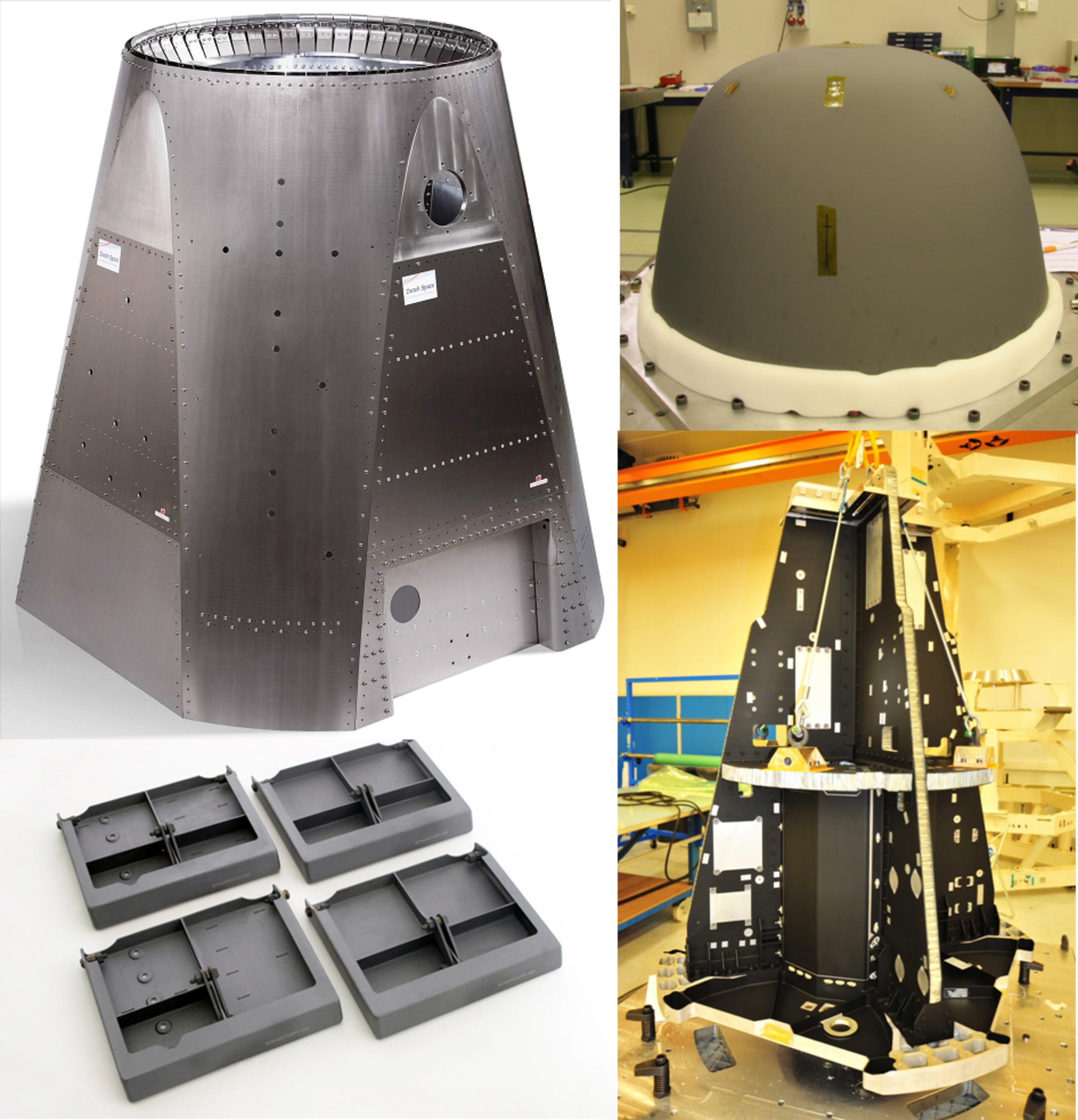 The Expert reentry vehicle is designed to study aerothermodynamics phenomena accurately during reentry. It adopts state-of-the-art sensor technology and advanced reusable materials. The design respects the stringent constraints imposed by the launcher in terms of volume, mass and environment.

Expert, unlike comparable Apollo- or Advanced Reentry Vehicle -style capsules, is an elongated conical pyramid shape flying with the nose in front and has a very small angle of attack.

The blunt nose creates a detached shock wave during reentry. The ceramic nose then connects via a complex junction to the conical body made of reusable metallic material. The junction allows for differential expansion of the ceramic and metallic parts whilst maintaining parallel surfaces and minimising disturbances to the airflow. Four flat sides with four fixed flaps and rear thermal blankets complete the external outer shape.

The external Thermal Protection System (TPS) is designed to withstand the environmental loads without any degradation of material properties and to maintain the internal structure within its allowable temperature range. The TPS is densely populated by sensors and features two optical windows for plasma spectrometry.

Inside the TPS the cold structure hosts the avionic equipments to provide power, processing and data storage, a descent and landing system and the interfaces to the launcher.

The avionics architecture includes the onboard computer and mission management functions. The Expert data handling provides the timer sequence reference and the command signals for the mission events. It also stores within the Expert memory the payload and system data collected during flight. All the data are saved onboard in dedicated mass memory units, which are redundant and crash-resistant.

The power subsystem generates a total of 700 Wh energy, regulates the power and distributes it to subsystems, according to the mission profile.

The descent and landing system, provided by an experienced Russian industrial consortium, features a two-stage supersonic parachute system. The first stage is a cross-shaped supersonic drogue parachute which is ejected by pyropushers, after which the second stage or main parachute is deployed at subsonic speed.

The supersonic parachute stabilises Expert during the transonic flight, whilst decelerating back through the sound barrier, thus allowing the deployment of the main parachute in a stable aerodynamic configuration.

The main driver of the decent and landing system design is to reduce the speed at landing from the initial speed in excess of 800 m/s to below 10 m/s for a soft touchdown.

Following the landing, Expert will be recovered by tracking the COSPAS/SARSAT beacon in the capsule. The signal will also be received via satellite and provided to the rescue helicopters.

After the recovery, the data will be extracted from the memory units and provided to the experimenters for analysis.