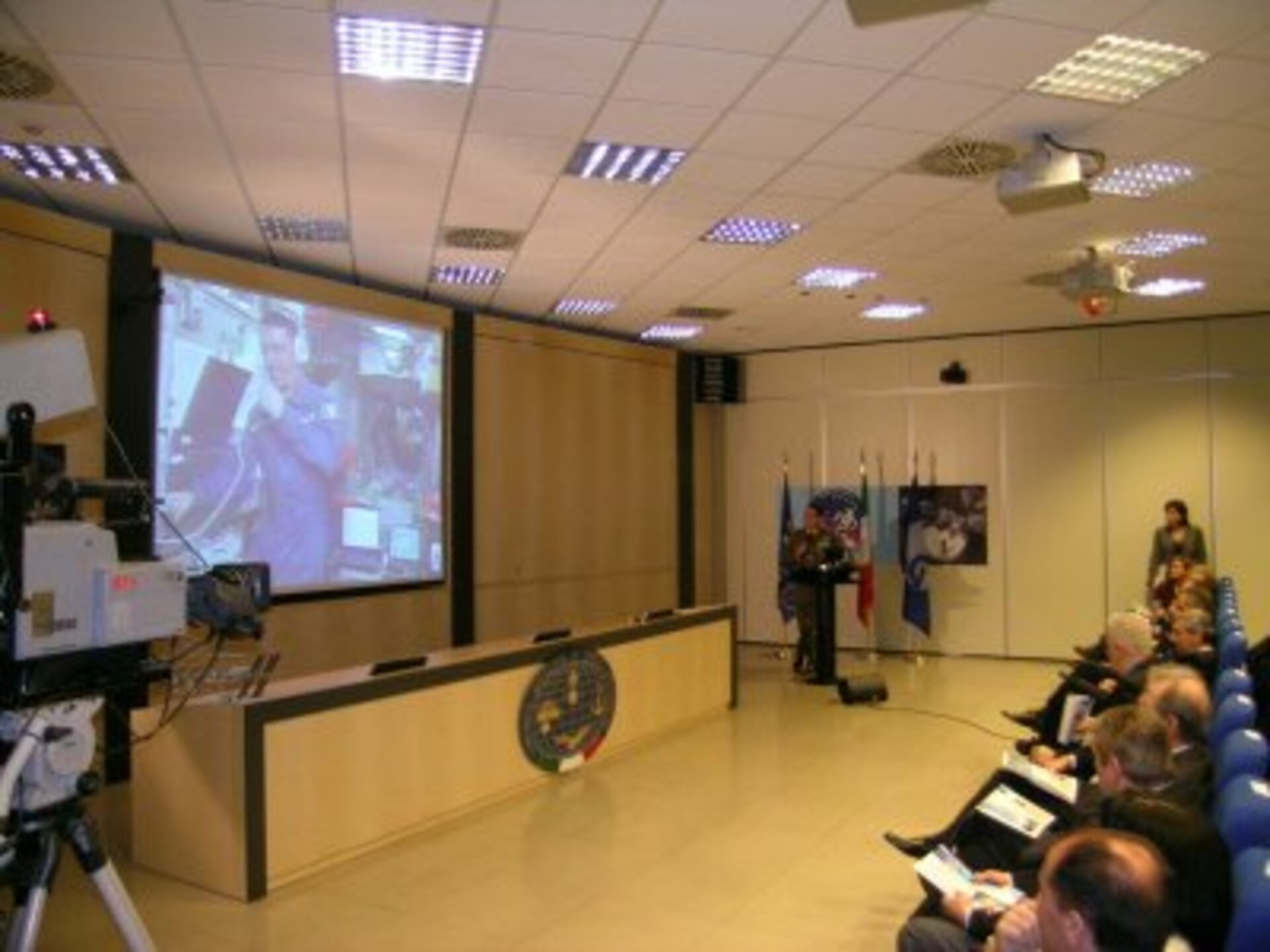 Can space contribute to improving life on Earth? Can space activities really meet the needs of people on Earth? Can Italy maintain its top-level position in research in the aeronautic sector.

These were the themes of the questions discussed on Monday 18 April at 21:12 (CEST) during an audio-video link between the Interforce Operational Centre of the Italian Ministry of Defence and Roberto Vittori, the Italian ESA astronaut at present living in microgravity inside Zvedza, the Russian living quarters on board the International Space Station (ISS).

Space exploration is fundamental and not just because of its strategic importance. It is also a source of technological innovation and development. This is why the Italian Air Force Flight Test Centre (CSV) is collaborating with the Medical Division of the Yuri Gagarin Cosmonaut Training Centre. Since last January, three medical officers from the Italian Air Force have been following a course at Star City, near Moscow to qualify as Space Flight Surgeons.

In the future, this will enable Major Francesco Torchia, Captain Paola Verde and Captain Angelo Landolfi to carry out a support role in all medical aspects of a spaceflight, whether long or short. This will also enable CVS to obtain Russian certification allowing them to carry out some of the tests needed to select Italian astronauts, at the Italian facilities in Pratica di Mare, just outside Rome.

This is the first time that the Yuri Gagarin Cosmonaut Training Centre has collaborated so closely with another nation and testifies the desire of the Italian Air Force to maintain its strong level of know-how in the space medicine sector.

The CSV’s interest in space medicine is also shown by the presence of the VSV experiment on board the ISS as part of the Eneide Mission. Colonel Enrico Tomao, the head of flight and space medicine at CSV, is the Principal Investigator for a human physiology experiment designed to analyse the visceral receptor performance within an environment which rules out possible bias due to visual and gravitational inputs.

Orientation is mainly due to inputs from specialised sensors located in the eye, the inner ear, and joints and muscles. Recently new inputs have been revealed. Some receptors in the kidneys and the thorax are also sensible to shifts of blood mass and contribute to the sense of subjective vertical: that is, an individual’s perception of vertical orientation. As this find is so recent, there is still little data on the effect this would have in an environment such as the ISS.

The first phase of the experiment was carried out when Vittori was still at the Gagarin Cosmonaut Training Centre near Moscow. On 21 April Vittori will undergo a second trail onboard the ISS, lasting an hour, during which a system called Lower Body Negative Pressure will be used. This results in the movement of fluids, mainly blood, toward the feet, thus stimulating the visceral receptors. The last phase of the experiment will be carried after re-entry to see the effects, if any, of prolonged exposure to microgravity.