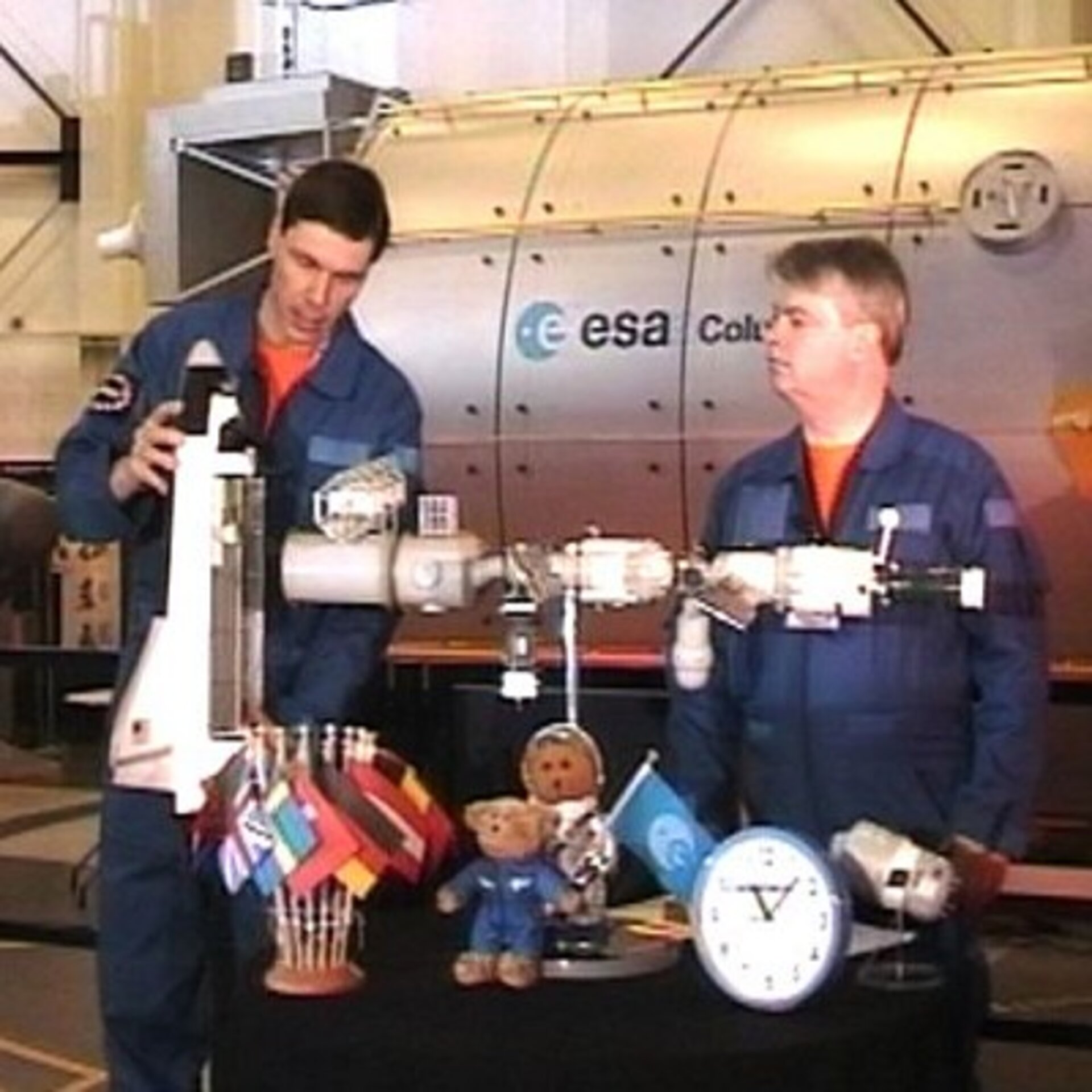 Schoolchildren gathered at FEZ-Berlin, a youth and family leisure and learning centre in Berlin, Germany, were recently treated to a TV show unlike any other they will have seen before. For the hour-long show, 3-D TV images were broadcast to Berlin live from ESA's Erasmus Centre, in Noordwijk, the Netherlands.

Gathered in the space learning department at FEZ-Berlin, the children wore special glasses to convert the TV images into a full 3-D TV experience. During the live link-up between Noordwijk and Berlin, they heard all about the peculiarities of living and working on the International Space Station (ISS).

Against the backdrop of a full-scale model of the European Columbus laboratory, the two presenters used a variety of models and props to help explain how German ESA astronaut Thomas Reiter will travel to the Station onboard a Space Shuttle later this year and complete a six to seven-month stay on the Station.

"Since we cannot all travel into Space, we try to bring the Space Station down to Earth. The 3-D broadcast is a way to get as close as possible to life onboard," explained Dieter Isakeit, Head of the Erasmus Centre, and one of the presenters of the broadcast. "The third dimension helps us to explain how the Station works – the viewer can see all the details and gets a more complete impression of what it is like on board."

To describe how the astronauts work, eat and drink in space, the show's setting moved to a life-sized replica of the Russian Zvezda laboratory, which is also the Station's main module. Seated behind the module's dining table, the presenters told the audience in Berlin what type of food the astronauts eat on the Station and that they rarely have any fresh fruit and vegetables.

Making a link to the upcoming World Cup football, for which Berlin will host several matches, a falling football was used to graphically illustrate that microgravity is created by nothing other than free-fall. The International Space Station falls around the Earth, and that is why everything on board is floating in mid-air.

The pupils also learnt about some of ESA's other human spaceflight activities through specially prepared 3-D film clips - one actually shot in weightlessness during an ESA parabolic flight campaign on board the Airbus A300 'Zero-G' aircraft, and another of Jules Vernes, the first Automated Transfer Vehicle (ATV), during testing at ESA's test facility.

Unlike a regular TV-show watched from the comfort of their living room, there was also an opportunity for the children to put their questions to the presenters. What are ESA's plans for the future? Has ESA found life on other planets? Can we send robots into space instead of humans?

At the close of the live broadcast Monica Brandis, project manager for the “Orbital” space centre at FEZ-Berlin, thanked ESA on behalf of the children for being able to take part. "We could see everything in great detail," she said. "We have all learnt a lot. It was a perfect mixture of information and entertainment." The 3-D television transmission also marked the official opening of the exhibition on the Astrolab mission of ESA astronaut Thomas Reiter at FEZ-Berlin. The exhibition will last until September.

The history of live 3-D broadcasting at ESA dates back to 2001 when the Erasmus Centre produced its first live transmission. During that broadcast from Noordwijk ESA astronaut Ulf Merbold explained the features of the Columbus laboratory to the participants of the ISS Forum 2001 in Berlin. This was a European premiere for 3-D television live transmission.

Since then, the Erasmus Centre has flown a 3-D photo camera to the ISS. With the help of ESA astronauts who have flown to the Station, the Centre now has an extensive archive of spectacular 3-D still images illustrating life onboard. A 3-D video camera is currently under qualification for flight to the Station. Thomas Reiter will use the camera during his upcoming mission. These 3-D videos will later be available for presentation to the public.