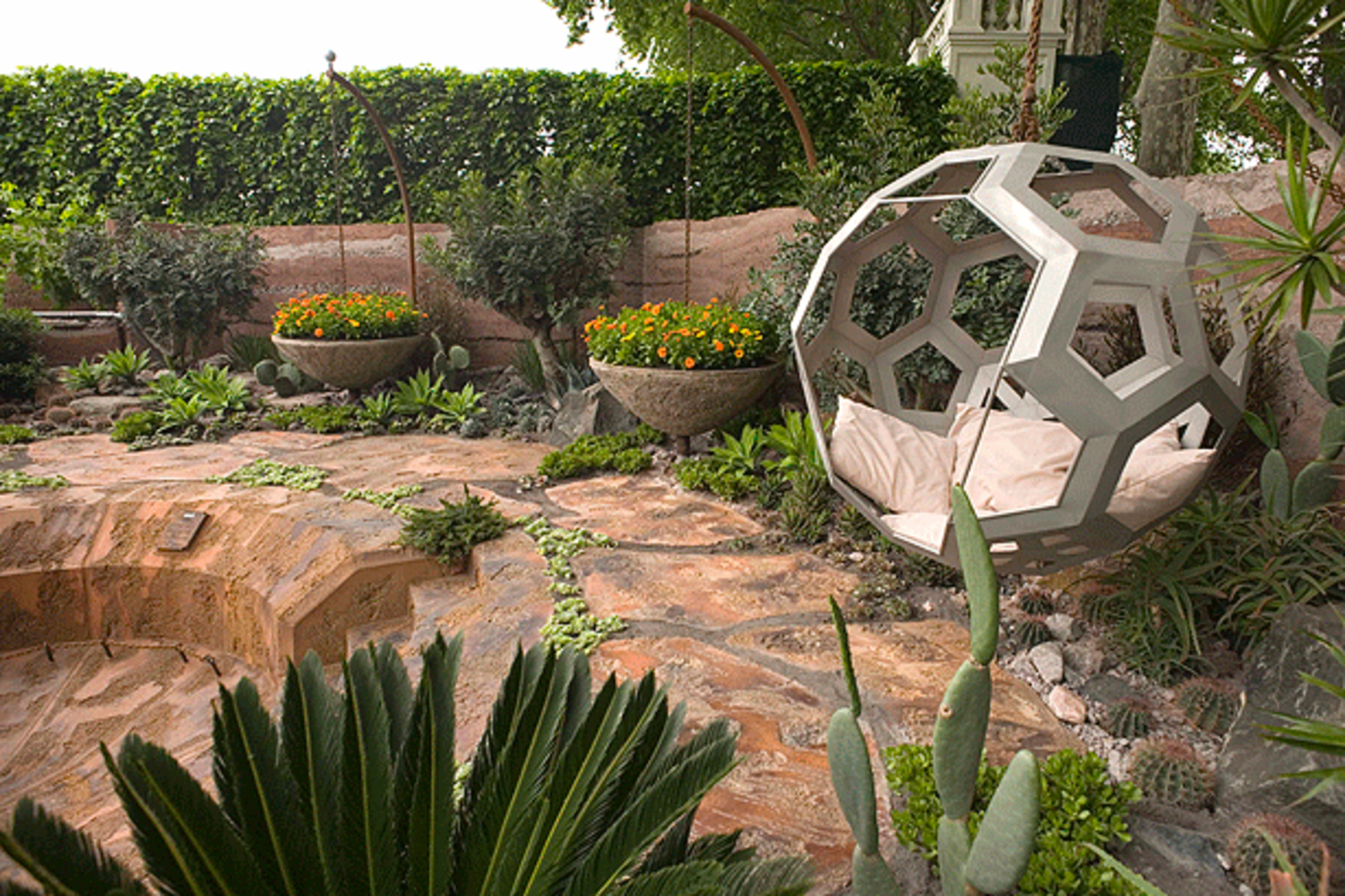 Her garden, intended to realistically model what might be used in a future human habitation on Mars, won a Gold Medal last week at the Chelsea Flower Show, operated by the UK's Royal Horticultural Society.

"600 Days with Bradstone" was also named 'Best Show Garden' at the show, one of the UK's most prestigious gardening events.

The terrestrial space garden, situated within a domed habitat as part of an imagined future human mission on Mars, is intended to provide astronauts with edible products, medicinal remedies, regenerated air and water, and vital psychological support during an assumed 600-day mission.

Sarah Eberle, a long-time garden and landscape designer, started thinking about a possible space garden in the late 1990s.

She considered diverse factors ranging from physical size, layout and climate within a possible doomed, Kevlar habitat to providing food, water and a sense of well-being and support to humans living for extended periods away from Earth.

"You have to consider colour, water and plant longevity. Also, how would someone feel for 600 days in space? I thought the feeling of seeing something growing would be most important," she Sarah.

Over several years around 2000, Sarah consulted with several ESA experts working in research and development for human spaceflight to better understand the actual and foreseen scientific and environmental factors affecting a mission to Mars. "We had to make many assumptions, but everything in the garden is based on real science," says Sarah.

Initiating such development far ahead of the real space mission needs is the most cost-efficient way to give European science and industry the necessary competence and experience.

Dr Roger Binot, a bio-scientist in the Science & Applications Division of ESA's Directorate of Human Spaceflight, Microgravity and Exploration at ESTEC, provided expertise to Sarah based on his pioneering work in regenerative systems. She also consulted with other ESA scientists working in bio-research and application development.

Traditional systems that provide air, water and other life support for astronauts in space are based on chemical and mechanical technologies, which are complex, require regular maintenance and ultimately cannot operate at peak efficiency for very long durations.

"Regenerative systems that adapt, evolve and that are self-sustaining are necessary for future habitats. We need real, living systems," he says.

Together with partners at universities, private industry and various research institutes, Dr Binot and his ESA colleagues have initiated work on a range of innovative technologies in areas such as reverse osmosis water purification, closed ecological systems, and biological air filtration.

"Initiating such development far ahead of the real space mission needs, but with ground applications in mind, is by far the most cost-efficient way to give European science and industry the necessary competence and experience for responding to the needs of future space programmes," says Dr Binot.

In preparation for future European space exploration missions, ESA is actively conducting a range of activities.

These range from experiments onboard the International Space Station, which will see the arrival of Europe's Columbus Laboratory in 2007, to confinement studies on the ground, such as the 'Mars500' study. ESA is now planning a 2013 robotic exploration mission to Mars, called ExoMars, which will search for life - extinct or extant - by drilling up to 2m below the Red Planet's surface.

The garden is partially dug into the 'planet' surface and is intended to have rigid vertical sides and a Kevlar canopy.

Specific plant varieties were chosen for their multiple beneficial properties, such as coffee, wheat and calendula - for colour, nutrition and medicinal effects - and carob - as a chocolate substitute.

The stones in the garden were selected and specially quarried in Scotland based on their similarity to the colours and textures of Mars rock.

The garden is sub-divided into two interlocking spaces. The front incorporates a spring where water forms a fine mist as it emerges from the ground and most of this area is dedicated to growing luxury food items such as pistachios and olives, as well as plants with healing properties such as arnica and opium poppy.

The rear provides an area of relaxation, with a hanging chair and a rest pod where astronauts can retire in order to maintain a natural 24-hour cycle. Familiar plants that evoke memories of life back home on Earth were chosen for the garden as these are psychologically important to the astronaut, according to the garden's website.

I tell my daughters never to stop dreaming, because sometimes your dreams really do come true.

After some eight years researching the concept, consulting with experts at ESA and the British Science Museum, and securing a sponsor, Bradstone, part of Aggregate Industries UK, the garden was built in a fortnight of frenzied activity overseen by Sarah, who herself worked 15-hour days.

"It brings it all home why I go through this torture and pain, for such a sweet moment as this," she says. "I tell my daughters never to stop dreaming, because sometimes your dreams really do come true."