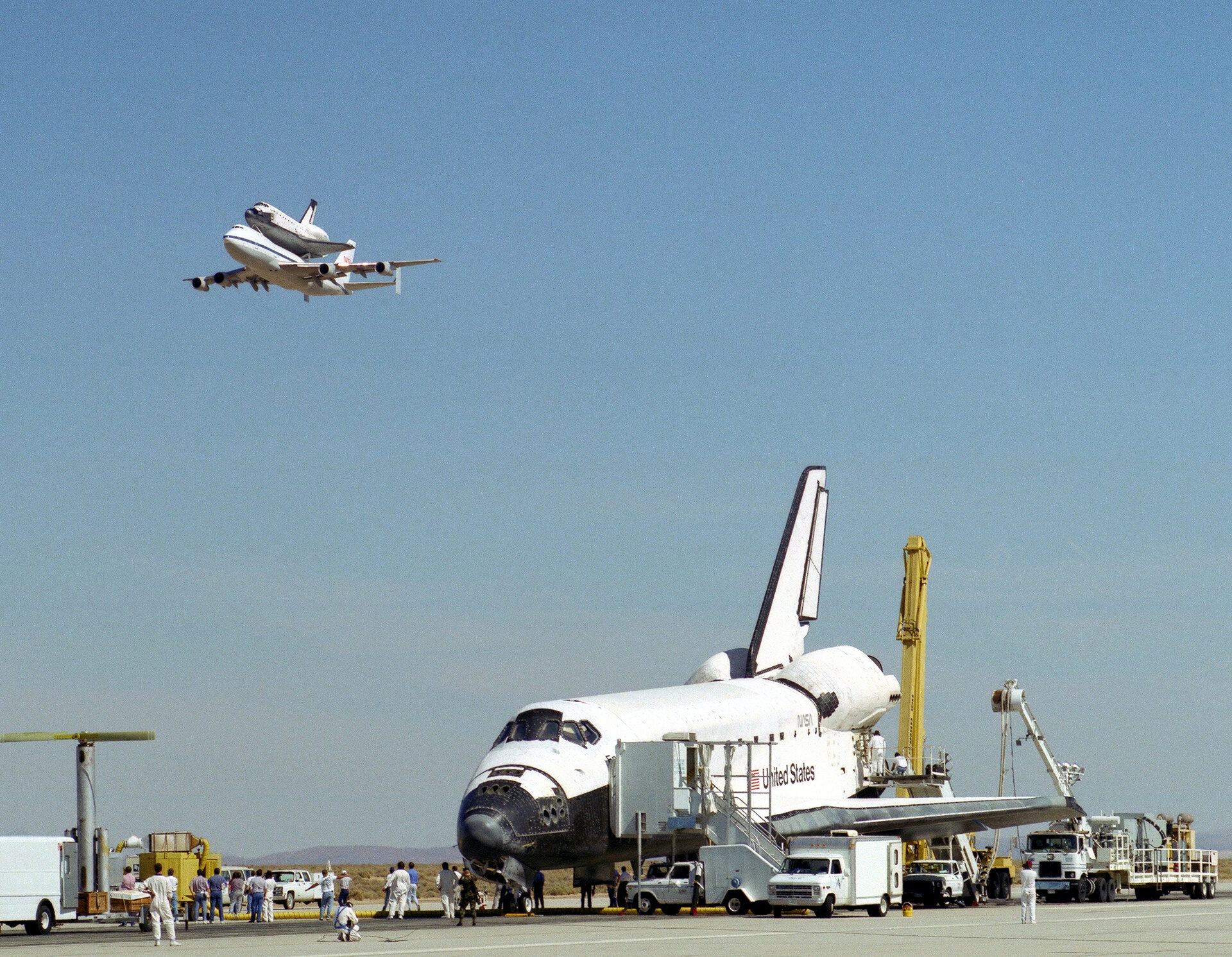 The Space Shuttle was the first reusable spacecraft, making it possible to build a fleet of vehicles that were launched and then refurbished after landing for their next missions.

Starting with Columbia and continuing with Challenger, Discovery, Atlantis and Endeavour, the spacecraft has carried people into orbit repeatedly, launched, recovered and repaired satellites, conducted research and built the largest structure in space, the International Space Station.

The five Orbiters have accumulated (before the last flight of Atlantis) on 134 missions 1316 days 19 hours 24 minutes 43 seconds in flight and made 20 958 orbits of Earth.

The first Space Shuttle (Orbital Vehicle 101, OV-101) was not built for space missions: it was used for unpowered test flights at NASA's Dryden Test Flight Center at the Edwards Air Force Base in California.

The Shuttle was lifted atop a modified Boeing 747 Shuttle Carrier Aircraft and made five test flights totalling 19 minutes of free flight.

Enterprise is on display at the Smithsonian Institution's Steven F. Udvar-Hazy Center near Washington DC, USA. When Discovery replaces it at the museum, Enterprise will be moved to the Intrepid Sea-Air-Space Museum in New York.

Columbia (OV-102) was the first Shuttle to fly to space and as the oldest member of the fleet it was slightly heavier than its successors, which benefited from advances in technology.

The first four flights of Columbia put the spacecraft through its paces. It was equipped with ejection seats, activated for the test flights and removed after the ninth flight.

Columbia was destroyed during reentry on 1 February 2003 when it was coming back to home from STS-107, its 28th flight. The seven astronauts died in the accident, one of the reasons which brought about the end of the Space Shuttle programme.

Challenger started its career as Structural Test Article STA-099. After studying the work needed to make Enterprise space-worthy , NASA calculated that it was less expensive to rebuild STA-099 as OV-099.

Challenger made its first flight on the STS-6 mission in April 1983 and became the workhorse of NASA's fleet during the early years of Shuttle operations: Challenger flew on 85% of all missions up to 1985.

Challenger was destroyed during the launch of its tenth mission, on 28 January 1986, killing all seven members of the crew.

Discovery (OV-103) was the hardest-working Shuttle, with 39 successful missions during 27 years of service since its debut in August 1984.

It was the third operational vehicle following Columbia and Challenger, and had the honour of delivering the Hubble Space Telescope into orbit. It was the Shuttle tasked with the two ‘return to flight’ missions after the Challenger and Columbia accidents.

Discovery was officially decommissioned after the STS-133 mission last February. After months of preparation, it will be handed over to the Smithsonian Institution’s National Air and Space Museum. Discovery will replace Enterprise at the Steven F. Udvar-Hazy Center in Virginia, near Washington Dulles Airport.

In 1989, it deployed Magellan to Venus and Galileo to Jupiter; it lofted the Compton Gamma Ray Observatory to orbit in 1991. Atlantis was the first Shuttle to dock with a space station, when it linked up with Russia’s Mir in 1995. It also delivered Europe’s Columbus laboratory to the International Space Station in 2008.

According to statistics, Atlantis was built in about half the time it took to complete the first operational craft, Columbia. Atlantis has had the fewest technical problems.

After its last flight, it will be handed over to the Kennedy Space Center Visitor Complex for display.

Endeavour (OV-105) is the youngest fleet member, making its maiden voyage in May 1992. It was built as a replacement for Challenger (lost in 1986) using the spare structural parts of Discovery and Atlantis.

It was the first Shuttle at the International Space Station, in 1998, delivering Node-1, the Station’s first US element.

Endeavour flew its final mission last May, STS-134, and it has been decommissioned. Its Canadarm will be sent to Canada, and the Shuttle itself will be given to the California Science Center in Los Angeles – not far from Palmdale, where it was built, and Edwards Air Force Base, the second landing strip for returning Shuttles.