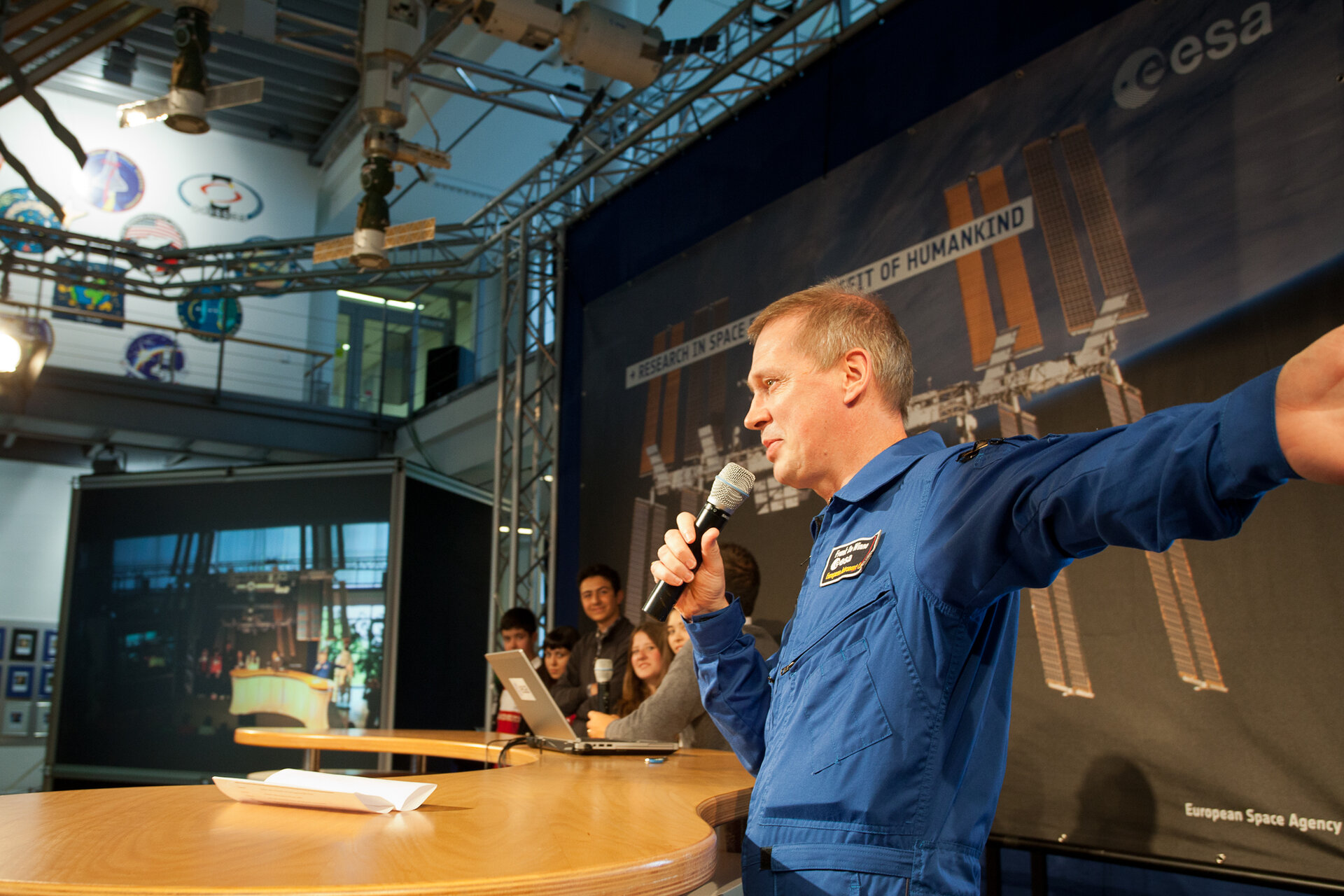 Winners of the YouTube Spacelab competition will get to see their experiments in space on 13 September. ESA astronaut Frank De Winne will participate in the live event, transmitted from the International Space Station to the world via YouTube.

Frank De Winne, Head of the European Astronaut Centre, acted as one of Europe’s jurors of the international student competition.

NASA, YouTube, ESA and Lenovo today announced the culmination of the YouTube SpaceLab competition in which astronauts will reveal the results of the two winning experiments live from the International Space Station and share them online on YouTube.

The livestream will connect the Station to YouTube’s London studio on Thursday, 13 September beginning at 13:30 GMT (15:30 CEST) and will be hosted by famous TV moderator Bill Nye ‘The Science Guy’.

The event includes the two global winners, Amr Mohamed from Alexandria, Egypt, and Dorothy Chen and Sara Ma, from Michigan in the USA.

The spider experiment of 18-year-old Amr was the final EMEA (Europe Middle East Africa) winner. In May, Amr presented his experiment to ESA astronauts, European students and media at ESA’s astronaut centre in Cologne, Germany.

YouTube SpaceLab, launched in October 2011 with partners including NASA, ESA, CSA, Japan’a JAXA and Space Adventures, is a worldwide science competition that challenged 14–18-year-olds to design a science experiment for space.

The world will now see the winning experiments performed by NASA astronaut Sunita Williams during a livestream on YouTube from 400 km above Earth aboard the Space Station.

The 40-minute programme will begin with host Bill Nye interviewing the global winners and special guests such as Frank De Winne via Google+ Hangout.

The event features the story of SpaceLab told through videos since its launch last year. Then, NASA’s Mission Control will connect the UK-based TV studio to the Station for a conversation with Sunita Williams about the winning experiments.

“The YouTube SpaceLab campaign has been an excellent, creative way of reaching out to future generations of scientists, on the ground and in orbit,” comments Frank De Winne, Europe’s first commander of the orbital outpost.

EMEA-winner Amr Mohamed came up with an experiment to explore the question: “Can you teach an old spider new tricks?”

As part of his prize, he travelled to Russia for a one-of-a-kind astronaut training experience in Star City, the training centre for Russian cosmonauts.

He proposed investigating the effects of microgravity on how the zebra spider catches its prey, and whether it could adapt its behaviour in space.

Dorothy Chen and Sara Ma, both 16, created an experiment that asks: “Could alien superbugs cure disease on Earth?”

It investigates whether compounds and nutrients block bacterial growth differently in microgravity, which ultimately could lead to fighting germs more effectively on Earth.

As part of their prize, Dorothy and Sara toured JAXA facilities and watched the rocket with the winning experiments blast off from southern Japan.

SpaceLab founder, Google’s Zahaan Bharmal, added, “Our hope is that this livestream from space will be the world’s largest, coolest scientific classroom.

“Today’s SpaceLab winners – as well as the millions of other young minds watching the stream on YouTube – represent tomorrow’s space explorers. They may one day walk on Mars!”

It provides a forum for people to connect, inform and inspire others across the globe and acts as a distribution platform for original-content creators and advertisers large and small. YouTube, LLC, is based in San Bruno, California, and is a subsidiary of Google Inc.