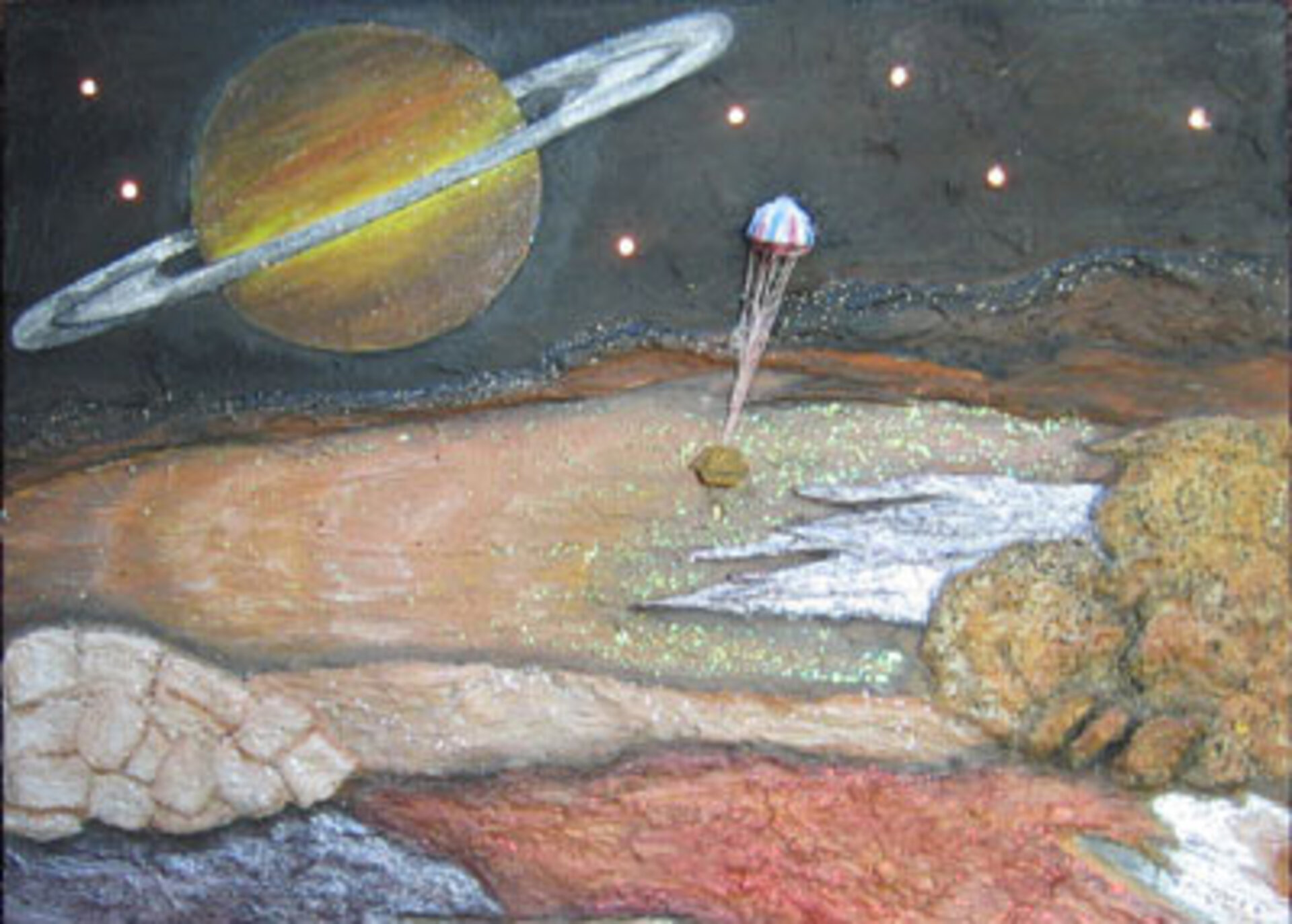 A 15-year-old from Harrisburg, North Carolina – competing against both other students and adults – won the grand prize in The Planetary Society’s international art contest, 'Imagining Titan: Artists Peer Beneath the Veil'.

Chelsey Tyler’s award will be to travel to the Huygens Mission Control Centre in Darmstadt, Germany, for the spacecraft's encounter with Titan on 14 January.

The European Space Agency’s Huygens probe will plummet through Titan’s atmosphere, penetrating the shroud that has long hidden the face of this distant moon. In anticipation of discovering what lies beneath the alien moon’s hazy atmosphere, The Planetary Society invited children and adults to create their own visions of what the space probe will reveal.

The winning artwork can be viewed at http://planetary.org/saturn/art.

"Titan, with its thick atmosphere and shroud of haze, is uniquely intriguing among the moons of our solar system," said Bruce Betts, The Planetary Society’s Director of Projects. "Both students and adults in this contest did an amazing job presenting the wonders that may lie beneath Titan's veil."

Participants’ artwork could portray Titan viewed from the air after Huygens breaks through the cloud cover or the surface of the moon after the spacecraft has parachuted to a landing. Chelsey Tyler’s painting in oil pastels depicts the spacecraft plunging towards the moon’s surface.

Describing her winning entry, 'Chaos Beneath the Veil,' Tyler states: "I started on the picture wanting to make a very dark and gloomy landscape, having read that the probe will not be able to use solar power on the surface because of the thickness of the atmosphere. When I realized that dark and gloomy can also translate to boring and indistinct, I began to create contrast. In the end, I had a more chaotic and much more interesting picture than what I had originally envisioned."

All of the first and second place winners received a package of prizes from both The Planetary Society and ESA. The winning artwork will be displayed at Huygens Mission Control.

"We look forward to welcoming the winner of this contest to the European Space Operations Centre," said Claudio Sollazzo, the Head of the Huygens Operations Unit at ESOC. "In addition to uncovering the scientific secrets of Titan's atmosphere and surface, Huygens will serve to intrigue and inspire the next generation of scientists and engineers. We are very pleased to participate in this effort."

The Huygens probe is part of the four-year Cassini-Huygens mission to Saturn. While ESA controls Huygens, NASA’s mission control for Cassini is located at the Jet Propulsion Laboratory in Pasadena, California.

On 13 January, The Planetary Society is hosting a public event in Pasadena, California to celebrate Huygens’s arrival at Titan the following day.

For artwork images or interviews

Media interested in obtaining higher resolution images of the winning artwork for publication or who wish to schedule an interview should contact Susan Lendroth at + (626) 793-5100 ext. 237 or by e-mail at susan.lendroth@planetary.org.