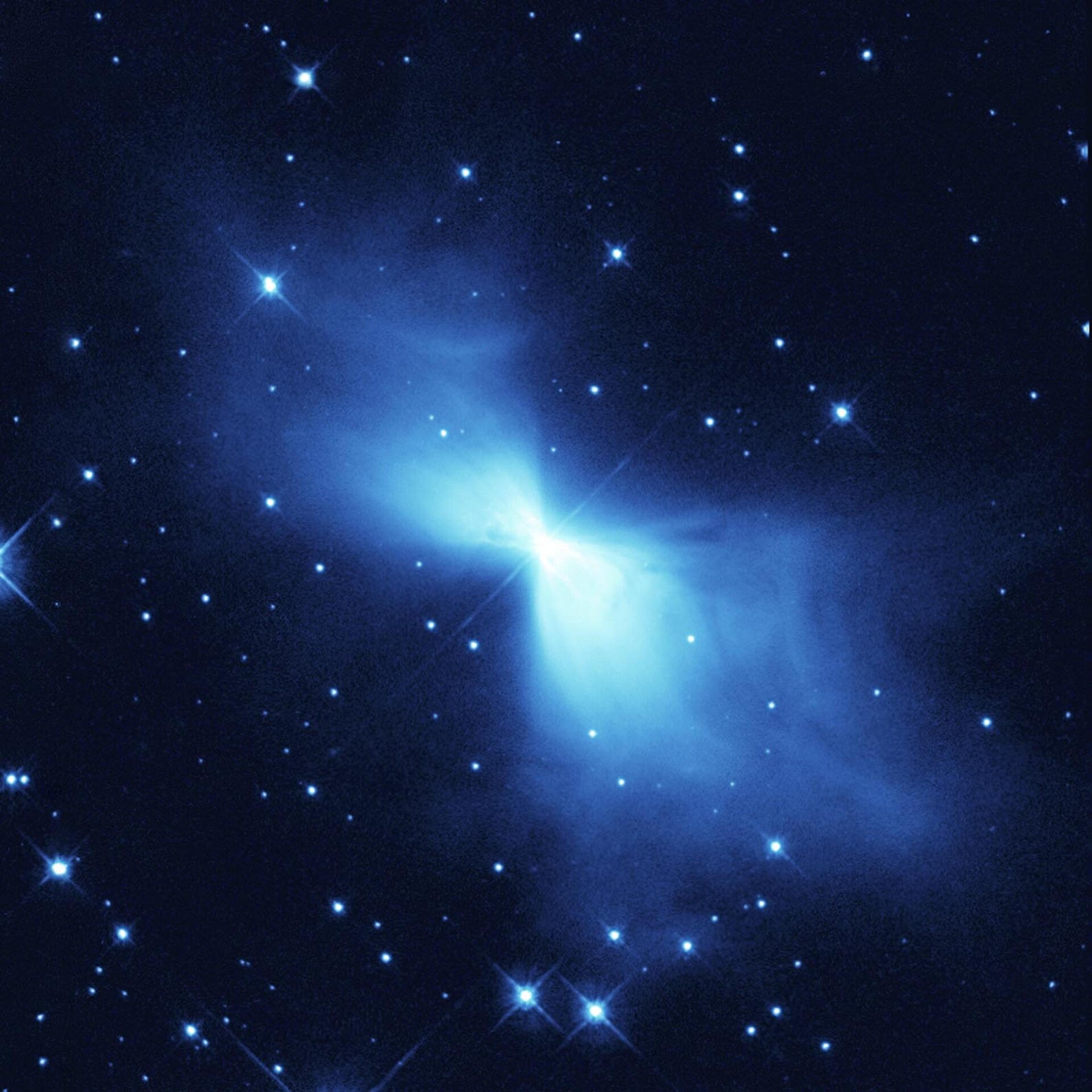 The Boomerang Nebula is a young planetary nebula and the coldest object found in the Universe so far. The NASA/ESA Hubble Space Telescope image illustrates how Hubble's keen vision reveals surprises in celestial objects.

This NASA/ESA Hubble Space Telescope image shows a young planetary nebula known as the Boomerang Nebula. It is in the constellation of Centaurus, 5000 light-years from Earth. Planetary nebulae form around a bright, central star when it expels gas in the last stages of its life.

The Boomerang Nebula is one of the Universe's peculiar places. In 1995, using the 15-metre Swedish ESO Submillimetre Telescope in Chile, astronomers Sahai and Nyman revealed that it is the coldest place in the Universe found so far. With a temperature of -272°C, it is only one degree warmer than absolute zero (the lowest limit for all temperatures). Even the -270°C background glow from the Big Bang is warmer than this nebula. It is the only object found so far that has a temperature lower than the background radiation.

Keith Taylor and Mike Scarrott called it the Boomerang Nebula in 1980 after observing it with a large ground-based telescope in Australia. Unable to see the detail that only Hubble can reveal, the astronomers saw merely a slight asymmetry in the nebula's lobes suggesting a curved shape like a boomerang. The high-resolution Hubble images indicate that a better name would perhaps have been the 'Bow Tie Nebula'.

Hubble took this image in 1998. It shows faint arcs and ghostly filaments embedded within the diffuse gas of the nebula's smooth 'bow tie' lobes. The diffuse bow-tie shape of this nebula makes it quite different from other observed planetary nebulae, which normally have lobes that look more like 'bubbles' blown in the gas. However, the Boomerang Nebula is so young that it may not have had time to develop these structures. Why planetary nebulae have so many different shapes is still a mystery.

The general bow-tie shape of the Boomerang appears to have been created by a very fierce 500 000 kilometre-per-hour wind blowing ultracold gas away from the dying central star. The star has been losing as much as one-thousandth of a solar mass of material per year for 1500 years. This is 10-100 times more than in other similar objects. The rapid expansion of the nebula has enabled it to become the coldest known region in the Universe.

The image was exposed for 1000 seconds through a green-yellow filter. The light in the image comes from starlight from the central star reflected by dust particles.