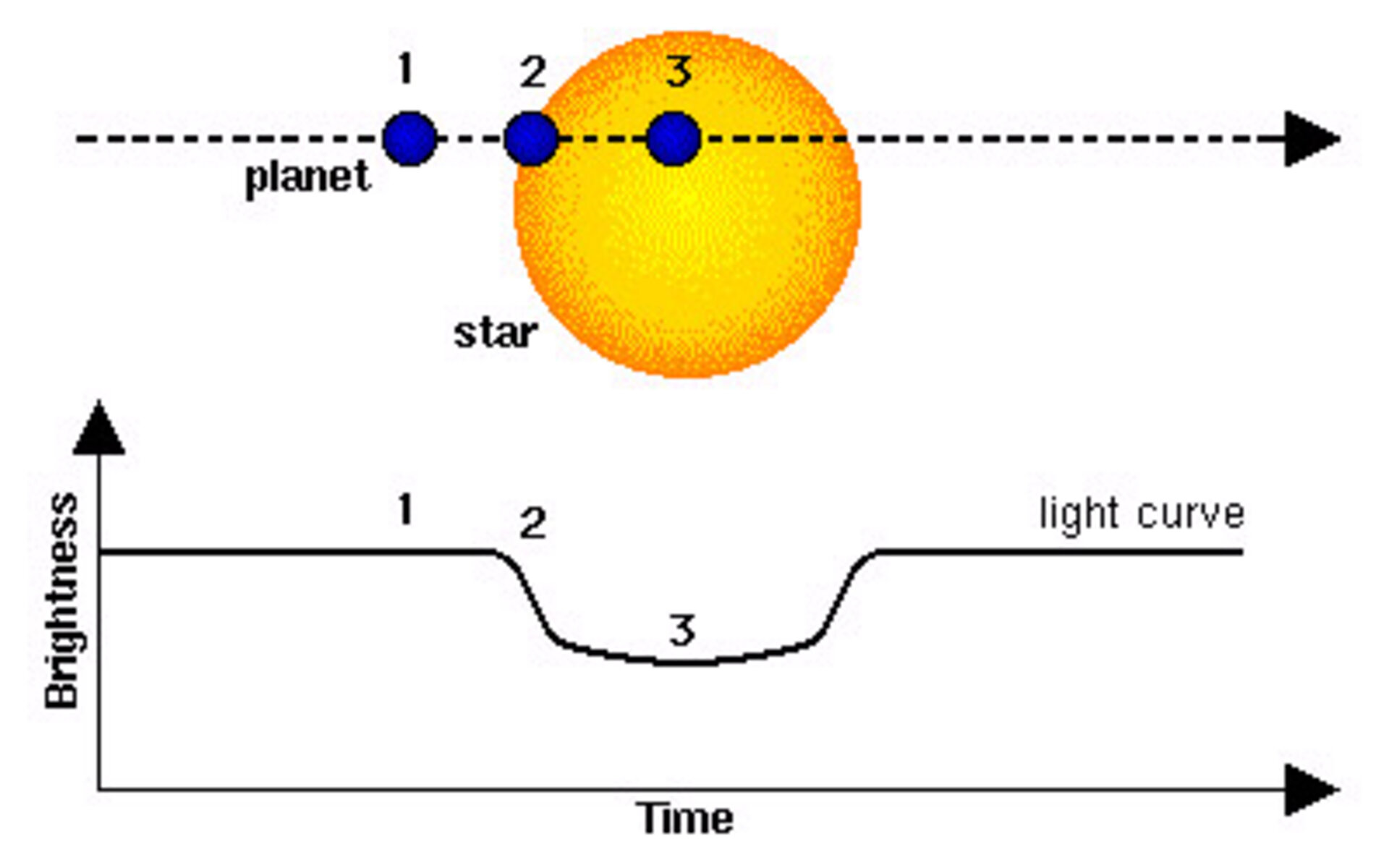 There are three main detection techniques that can be used to find extrasolar planets. All of them rely on detecting a planet's effect on its parent star, to infer the planet's existence.

The three techniques are simple in principle but difficult in practice because extreme precision is needed to register the planet's effect on the much larger star. This is also difficult from Earth because the atmosphere distorts our view of the stars, limiting the accuracy of the observations. Space missions can overcome this problem. The methods in question are:

These methods are all referred to as 'indirect' methods.

Eventually, astronomers hope to be able to isolate either the light being reflected by exoplanets or the thermal infrared radiation emanating from the planetary surface itself. These techniques are known as 'direct' detection methods, resulting in actual pictures being taken of the surfaces of extrasolar planets, or in electromagnetic 'spectra', the analysis of which gives us information about the atmospheric composition of these planets.

The vast majority of planetary detections so far has been achieved using the radial-velocity technique from ground-based telescopes. The method requires the light from a star to be passed through a prism and split into a spectrum, rather like water droplets in the atmosphere splitting sunlight into a rainbow.

When the spectrum is magnified, straight black lines can be seen superimposed on the colours. These spectral lines correspond to the wavelengths of light that have been absorbed by chemicals on the surface of the star from which the light originated. Every element and molecule generates its own chemical fingerprint through unique ‘spectral lines’ at different wavelengths. These provide an indication of the amount of that element present in the object and under what conditions (like temperature and pressure).

Studying these lines can show which stars have large planets around them. How? As the planet orbits the star, it pulls on it with its gravitational field, forcing the star into a small orbit, or wobble. It makes it look as if the star is pirouetting around a point in space. The star will sometimes be spinning towards Earth and at other times spinning away.

When the star moves towards Earth, the wavelengths of the spectral lines in the light it emits move towards the blue end of the spectrum. When the star travels away from Earth, the opposite happens, and the wavelengths are moved towards the red part of the spectrum. Astronomers therefore look for stars where the spectral lines are moving back and forth, since these must be the ones with planets in orbit around them. By measuring the amount of movement with time, the mass of the planet and its orbit can be determined.

This technique is limited, however, because it will never be able to detect small, Earth-sized worlds. With the best spectroscopes, astronomers can confidently detect motions of about 15 metres per second. However, Earth only forces the Sun to move at 0.1 metres per second. Even if a spectroscope could be made to detect this, the boiling of the star's gaseous surface (the acoustical modes studied on the SUN by ESA’s SoHo and to be studied on stars with the COROT mission) would mask the effect of the planet.

Another technique, related to the radial-velocity detection, is to precisely measure the position of a star, so that any wobbling can be directly detected. Such observations are known as astrometry. From Earth's surface they too are restricted by the atmosphere. Nevertheless, during the 20th century, this method was used to attempt planetary detection around some nearby stars, using large ground-based telescopes. None of the detections have been confirmed with modern methods.

Instead, the Fine Guidance Sensors (FGS) onboard the Hubble Space Telescope has been used successfully on 2-3 objects to detect exoplanets. It has been used only on very nearby and low mass (red dwarf type) stars. ESA’s HIPPARCOS data has been used in a number of cases to provide upper limits.

ESA's next astrometric mission, Gaia, is designed to be the most precise astrometric satellite ever created and will survey thousand million stars after its launch, early next decade. Among a great many other scientific goals, Gaia is expected to find between 10 000 and 50 000 gas giant planets beyond our Solar System.

Once again, however, the wobbling motion caused by an Earth-sized planet will be too small to be detectable, even by Gaia.

A more promising method for detecting small worlds is to look for the drop in brightness they cause when they pass in front of their parent star. Such a celestial alignment is known as a transit. From Earth, both Mercury and Venus occasionally pass across the front of the Sun. When they do, they look like tiny black dots passing across the bright surface.

Such transits block a tiny fraction of the light. If a distant star were transited by the equivalent of Jupiter, it would cause 1% of the starlight to be lost from view. One gas giant planet, found by the radial-velocity method, has also been detected using the transit method from a ground-based telescope. Star HD 209458 was discovered to possess a 51 Pegasi b-like planet (a large planet orbiting its parent star in a tight circular orbit, also known as 'hot Jupiters') and subsequently seen to dim at precisely the time that the planet was predicted to pass in front of the star.

Through this method more than 10 planets have now been detected. By having both the transit and the radial velocity information, the planets orbit can be determined exactly, and the true mass and size of the planet can be found. Unfortunately, the transit method can only detect very large and gaseous planets from the ground. To detect ‘rocky’ Earth-like worlds we need to go to space. This will first happen with CoRoT (Convection, Rotation and Transit), due for launch in late 2006.

The ultimate aim of this research method is to make direct observations of planets around other stars, so that astronomers can analyse the light from the planet itself, determine the chemical composition and assess physical state of these distant worlds. This is an extremely challenging task.

At visible wavelengths, a star like the Sun will outshine a planet like the Earth by ten thousand million times. Why? Planets do not emit visible light, they simply reflect some of the star's light. If, however, astronomers move to longer wavelengths, such as the mid-infrared, the contrast between the star and the planet drops to a million, because the amount of infrared given out by the star goes down while the planet itself begins to emit.

This mid-infrared radiation, however, is most easily viewed from space. At Earth's surface, the signals can be swamped by the infrared waves our own planet gives out. Also, because planets and stars are usually close together, Earth's atmosphere smears their light into a single fuzzy blob. Astronomers have therefore devised techniques to work around these constraints and make direct detections collecting both visible and infrared light.

Orbiting its parent star, a planet's motion will alter the wavelength of light it reflects from the star. When the planet is moving towards Earth, the wavelengths of light are squashed. On the other side of its orbit, the planet moves away from Earth and so the light is stretched to longer wavelengths. This behaviour is known as the 'Doppler effect'.

The star is also pulled by the planet (see radial-velocity technique) creating a smaller Doppler shift in its own light but always in the opposite direction to that of the planet's light. If the intensity of light coming from the star and planet are plotted on a graph, they combine into a shape called the Spectral Energy Distribution. As the planet orbits and the star wobbles, the shape of the graph changes.

In principle, computer analysis would be able to separate which parts of the signal were caused by the star's light, leaving just the planet's signal for analysis. However, four-metre diameter telescopes do not collect enough light to make this technique work and no one has yet tried it with an eight-metre telescope.

When light is reflected by a planet, it is not just the wavelength that can be changed. Being a wave, each light ray oscillates in a particular direction. Light rays emitted by a star are said to be 'unpolarised' because the oscillation direction of each ray is random.

When light rays bounce off the planet, however, the oscillations are forced into a preferred direction because of the way the light interacts with the atoms and molecules in the planet's atmosphere. Light rays lined up like this are said to be 'polarised'.

The light from individual telescopes can be combined to simulate collection by a much larger telescope. This technique is called interferometry and was pioneered using radio telescopes. It is now being applied to optical and infrared telescopes.

This method relies on the wave nature of light. A wave has peaks and troughs. Usually when combining light in an interferometer, the peaks are lined up with one another, boosting the signal. In nulling interferometry, however, the peaks are lined up with the troughs so they cancel each other out and the star disappears. Planets in orbit around the star show up, however, because they are offset from the central star and their light takes different paths through the telescope system.

Ground-based nulling interferometers are also being developed around the world to perfect the technique. Eventually, sophisticated flotillas of spacecraft, such as ESA's Darwin mission, will use nulling interferometry to isolate the light from Earth-like extrasolar planets.

All of the previously described methods have made direct detections by isolating the planet's light from that of the star. A direct image would be one on which the star's light is totally separated from the planet. A team of British astronomers believe that by using 8-metre telescopes, they may be able to see planets in orbit around white dwarf stars.

When the Sun dies, it will first swell into a red giant star, engulfing the planets out to Mars. It will then shed its outer layers into space and the remains will shrink into a white dwarf star. The gas giants will remain in orbit and may even spiral outwards from the star, making them easier to see. White dwarfs are dim so the contrast between a gas giant and the star falls to a factor of a thousand. That may be low enough to bring them within view of 8-metre telescopes. Observations are now being scheduled.

Eventually, to take images of the surfaces of extrasolar planets will require much larger telescopes in space, working together as interferometers.