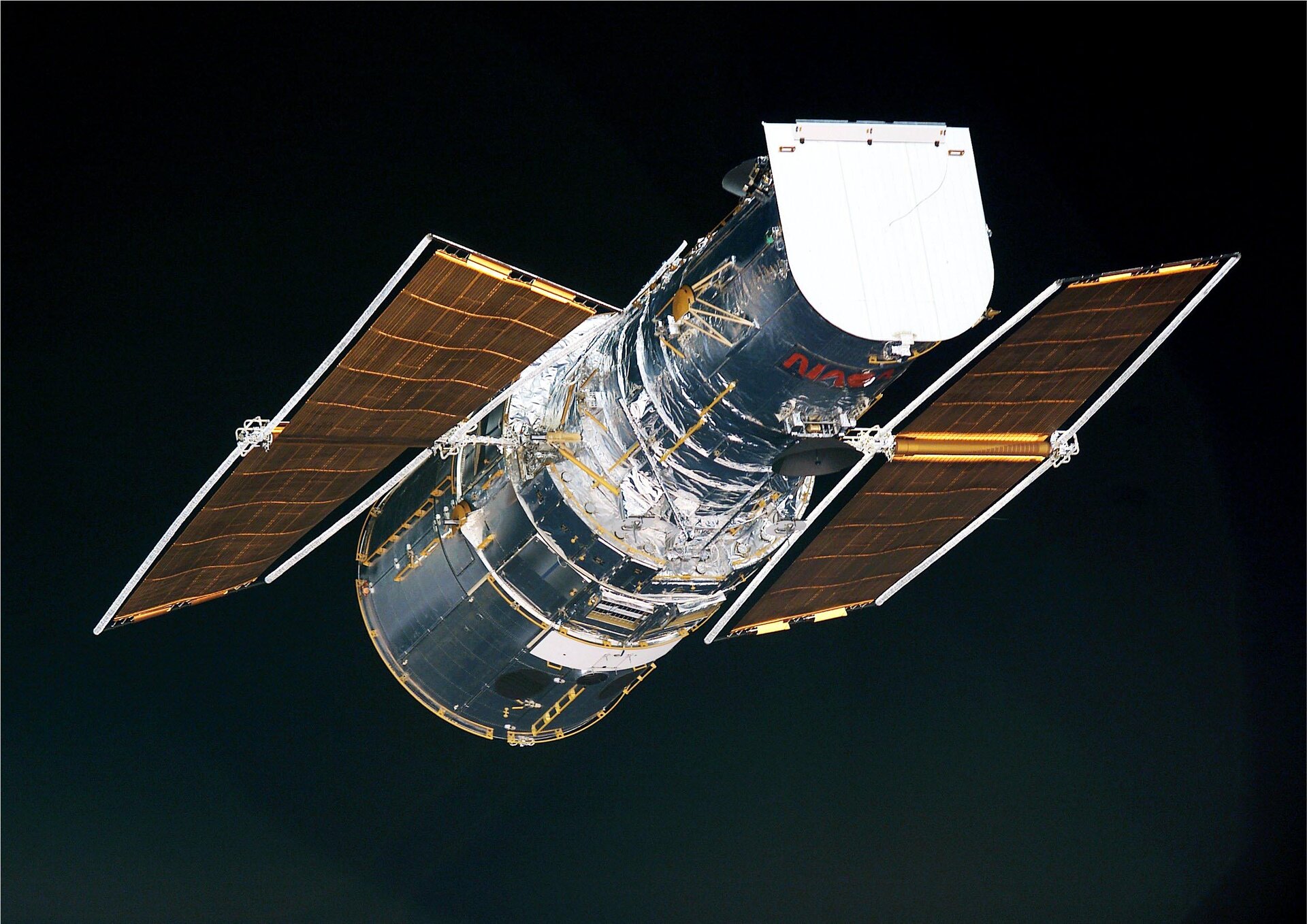 The power for Hubble's scientific discoveries comes from solar cells. Designing and constructing Hubble's first two sets of solar cell arrays constituted a huge technological achievement for the European Space Agency and European industry. After an in-orbit life of more than 8 years, this example of pioneering space technology was this morning (European time) replaced by new, more powerful arrays.

For the last week a dedicated team of engineers, technicians and scientists from the European Space Agency (ESA) has been focused intensely on the exchange of the solar arrays on the ESA/NASA Hubble Space Telescope. Based at NASA's Goddard Space Flight Centre, which is the nerve centre for these operations, the team has spent an intense few days supporting NASA in the exchange of the solar arrays.

Team leader, project manager Ton Linssen from ESA's Science Directorate at ESTEC, the Netherlands, explains: "The new arrays are yet another step in the longstanding, international partnership between ESA and NASA. ESA provided the first two sets of solar arrays, and for the third pair ESA and European industry designed, developed and tested the drive mechanisms which manoeuvre the arrays so that they stay pointed at the Sun. ESA was also involved in a unique testing of the new arrays in October 2000, which had never been done before. In the huge test chamber at ESTEC the rapid temperature change around sunset and sunrise in orbit can be simulated and any, even very small, movement of the arrays can be measured. Our facility is the only place in the world where this can be done."

Ton Linssen welcomes the exchange of Hubble's arrays: "The new arrays are much better than the previous set. They are rigid, smaller and produce more power to be used for Hubble's new generation of instruments. But this is certainly also to be expected. There are 20 years of significant technological development between the old and new sets of solar arrays. And don't forget that there was no room for arrays of this size [when folded together] and weight [twice that of the old arrays] in the Space Shuttle when Hubble was launched."

The first two sets of solar arrays had to fulfill a number of highly demanding requirements. Technical manager Michael Eiden from ESA in the Netherlands elaborates: "They needed to be lightweight, have a large surface area [to deliver the specified power] and be able to be stowed in a very compact manner, in order to be launched attached to the telescope in the Shuttle cargo bay."

Designers came up with a solution where the solar cells are attached to a flexible blanket that can be deployed and retracted essentially rolled out and in around a central drum, like a roller-blind. The first pair of flexible solar arrays were seen early on to be sensitive to temperature changes whenever Hubble went in and out of the Earth's shadow. This affected the very high stability required for Hubble's scientific observations. For the second set, installed in December 1993, European experts found an ingenious solution to correct for this little motion by isolating the main structure of the arrays from the temperature changes and suspending the solar cell blanket in a new way.

The flexibility also made its mark on the appearance of the first two sets of arrays. "Some people are surprised by how the arrays look," says Eiden. "They expect them to be perfectly flat, but in fact the somewhat warped appearance of the arrays just reflects their extreme lightness. From an engineering point of view, we think they are an elegant solution to a difficult technical problem."

No challenges without problems

Having risen to the challenge of building Hubble's 'power plant', small surprises still lay in store for the team. During the last Hubble Servicing Mission (SM3A) in 1999 the team inspected the very detailed photographic survey of the solar arrays that NASA had made for ESA. Suddenly they found something that was not supposed to be there. "We were on the planning shift when the astronauts were sleeping, and we looked for possible damage after micrometeorite impacts. It was a great surprise when we saw a 'hinge pin' protrude from one of the sides of the arrays. Later we found a few more protruding pins."

The hinge pins are 2.4 metre long strings of piano wire that hold the segments of solar cells together. The team believes that these pins wander back and forth due to differences in the thermal expansion between the solar blanket and the pins themselves when Hubble comes in and out of the Sun. The temperature has cycled between +60 0C to -85 0C and back 45 000 times during the lifetime of the second set of arrays. "At first we were a bit concerned. We had to investigate the possibility that the solar blanket segments could fall apart at a later time if the pins fell out completely. We came to the conclusion that the solid construction of the blanket would prevent this from happening. This was subsequently proven by tests on the ground."

Given the challenges the team had overcome in building the record-breaking arrays, there were all smiles in the 'Attached Shuttle Payload Control Center' on Sunday when the astronauts announced "Good to see that the SAs [Solar Arrays] are nominal!" At 9:32 UT Hubble was 'grappled' by the Shuttle arm. After examining the TV picture relayed back to Earth, ESA's solar generator specialist Lothar Gerlach, uttered: "I knew it! Everything is fine!" and added jokingly: "Look at these beauties [the arrays]. Let's just leave them up there!"

With a backdrop of lightning on the night side of the Earth preparations were made for the retraction of the solar arrays. And then the moment of truth came for the team. Ton Linssen describes: "It was a really intense phase just when the arrays had to be retracted. We did not know how the more than eight years in space had affected the mechanisms or perhaps changed the array blankets or insulation." His concern proved to be unfounded. The retraction worked beautifully, and the arrays could be exchanged without problems during the spacewalks on the two following nights.

Linssen says: "I must admit I am a happy man this morning. The solar arrays have by far exceeded the 5 year lifetime they were built for. They have worked flawlessly for more than 8 years and even exceeded the power output they were specified to deliver by about 10%."

When ESA's first set of solar arrays were brought back to Earth in 1993 scientists and engineers were eager to jump on them and examine the effects of their exposure to the harsh environment at 600 km altitude. They found more than 80 000 particle impacts of varying sizes. Lothar Gerlach, who is the central person in these 'post-flight activities', says: "I am very excited to see our arrays having performed so fabulously, even after this many impacts! The big question is: what caused all these impacts? Some are impacts from micrometeorites coming from the birth of the Solar System, and some can be attributed to paint flakes from spacecraft or other space debris." The analyses on the first arrays have shown that they are hit daily by as many as 1000 small (0.001 mm or 1 micron-sized) objects.

As soon as the Space Shuttle lands with the second set of ESA arrays, Lothar Gerlach will be hoisted into the Shuttle's cargo bay. Here he will take samples of the arrays before they are 'contaminated' by our atmosphere. Then the arrays will be sent back to Europe and will await further analysis. The scientific contribution of ESA's solar arrays will in this way continue for a number of years into the future, no longer for observational astronomy, but for material science and space debris research.