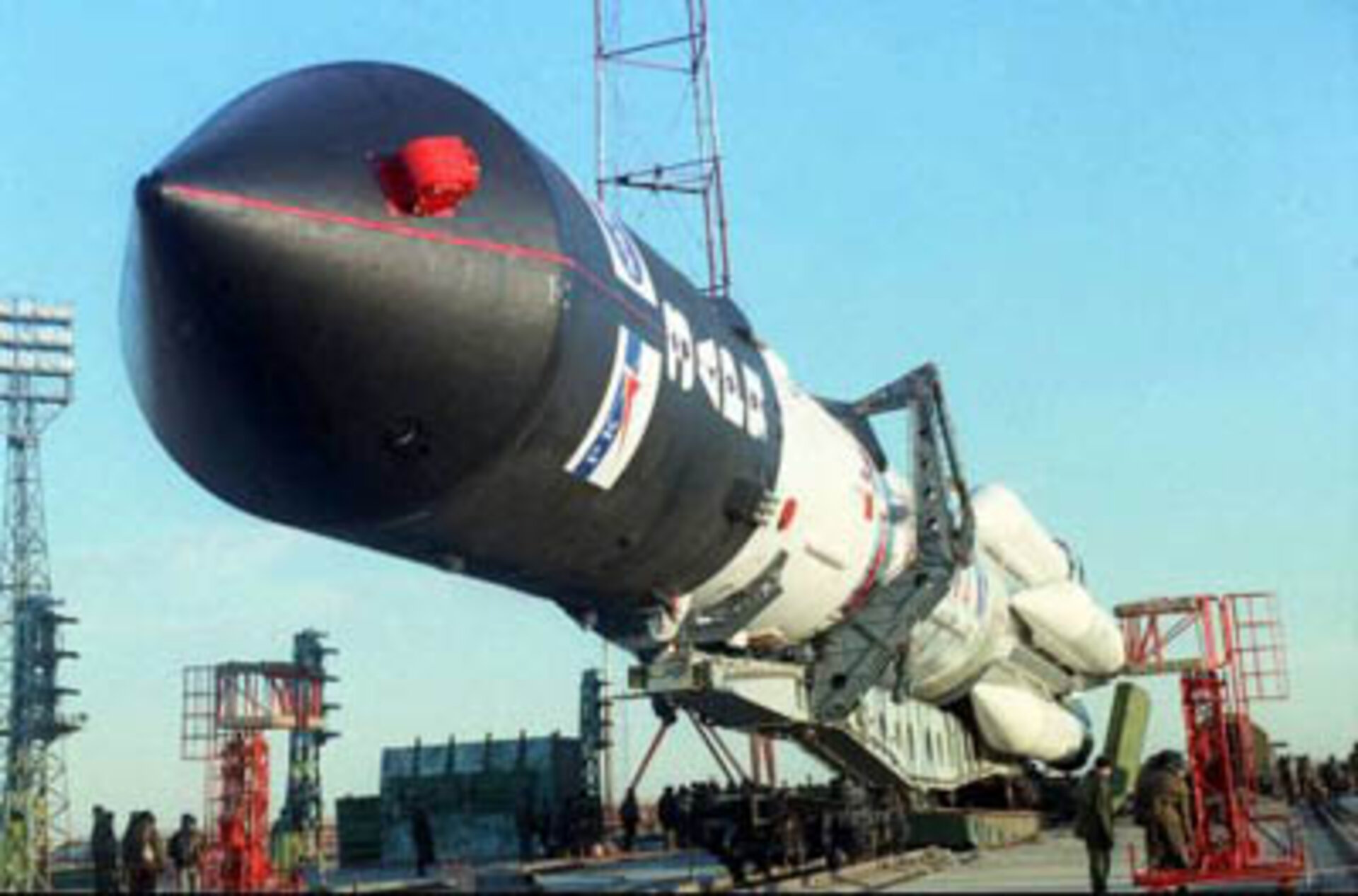 Integral was launched on a Proton rocket, Russia's largest operational launch vehicle. A powerful launcher is absolutely essential to put the heavy spacecraft into an unusually high Earth orbit which is crucial for the scientific success of the mission.

Proton's statistics are impressive: The total length of the four-stage booster is more than 57 metres, its total lift-off mass is almost 700 tonnes. The Proton has served as the primary heavy-lift launch vehicle for Russian unmanned space programmes for over 30 years. Used in more than 230 launches, it has a good record of reliability.

Russia provided the launcher for Integral for free but in return for observation time. An arrangement between ESA and the Russian Space Agency (RSA) was signed in November 1997 and later approved by the Russian government in September 1999. As part of the arrangement, RSA was responsible for placing the satellite in the desired orbit using a Proton launcher, while ESA was responsible for delivering a satellite compatible with the launcher. In October 1999 a launcher adaptation contract was signed to ensure proper interfaces of the launcher with the satellite.

The Integral launch was planned for October 2002 from the Baikonur Cosmodrome in the Republic of Kazakhstan, about 2100 kilometres south-east of Moscow, Russia.

The rocket was assembled horizontally, so the satellite also has to be integrated in this position. This required some modifications in the spacecraft's service module. The launcher with its payload was rolled out of the assembly building, raised to vertical, and moved to the launch pad.

The first stage of the booster has six engines. They ignited 1.6 seconds before lift-off. After two minutes flight, the ignition of the four engines of stage two occurred. About four minutes later the third-stage main engine ignites.

These three booster stages use nitrogen tetroxide and unsymmetrical dimethylhydrazine as propellants. They placed the upper section with the spacecraft into a low parking orbit with an inclination of 51.6° with respect to the equatorial plane.

About 50 minutes later, the upper stage was ignited. This was powered by a restartable, liquid oxygen-synthetic kerosene propulsion system. The upper stage put the satellite into a highly eccentric transfer orbit with a perigee altitude of about 700 kilometres. At the end of the upper-stage burn, the satellite separated.

The high and eccentric orbit guarantees long periods of uninterrupted observation with nearly constant background and away from trapped radiation in Earth's proton and electron belts. In this way, scientists can use 90% of the time spent in the orbit provided by the Russian rocket for scientific observations above an altitude of 40 000 kilometres. The orbital period with its 72 hours is a multiple of 24 hours which guarantees an optimal coverage pattern from the ground stations. This coverage is continuous for Integral's orbit for all revolutions and allows repetitive working shifts on ground.

In its four-stage configuration, Proton is regularly used to launch spacecraft into geosynchronous trajectories. As a three-stage vehicle it primarily launches large 'space station' type payloads into low-Earth orbit. In November 1998, a Proton rocket put the first component for the International Space Station (ISS) into orbit. In the future, the Proton will be a crucial asset in deploying ISS.

Production of the first two-stage Proton model started in 1962. The four-stage rocket was originally developed to fly by the Moon with a manned capsule. Today, International Launch Services, a joint venture between the Russian companies Khrunichev and RSC Energia and American Lockheed Martin commercially market launch services of western satellites on the Proton. In April 1996 an Astra broadcast satellite was the first Western spacecraft to be carried by a Russian Proton rocket. Many others have followed, for example, the Iridium satellites for mobile telephony.