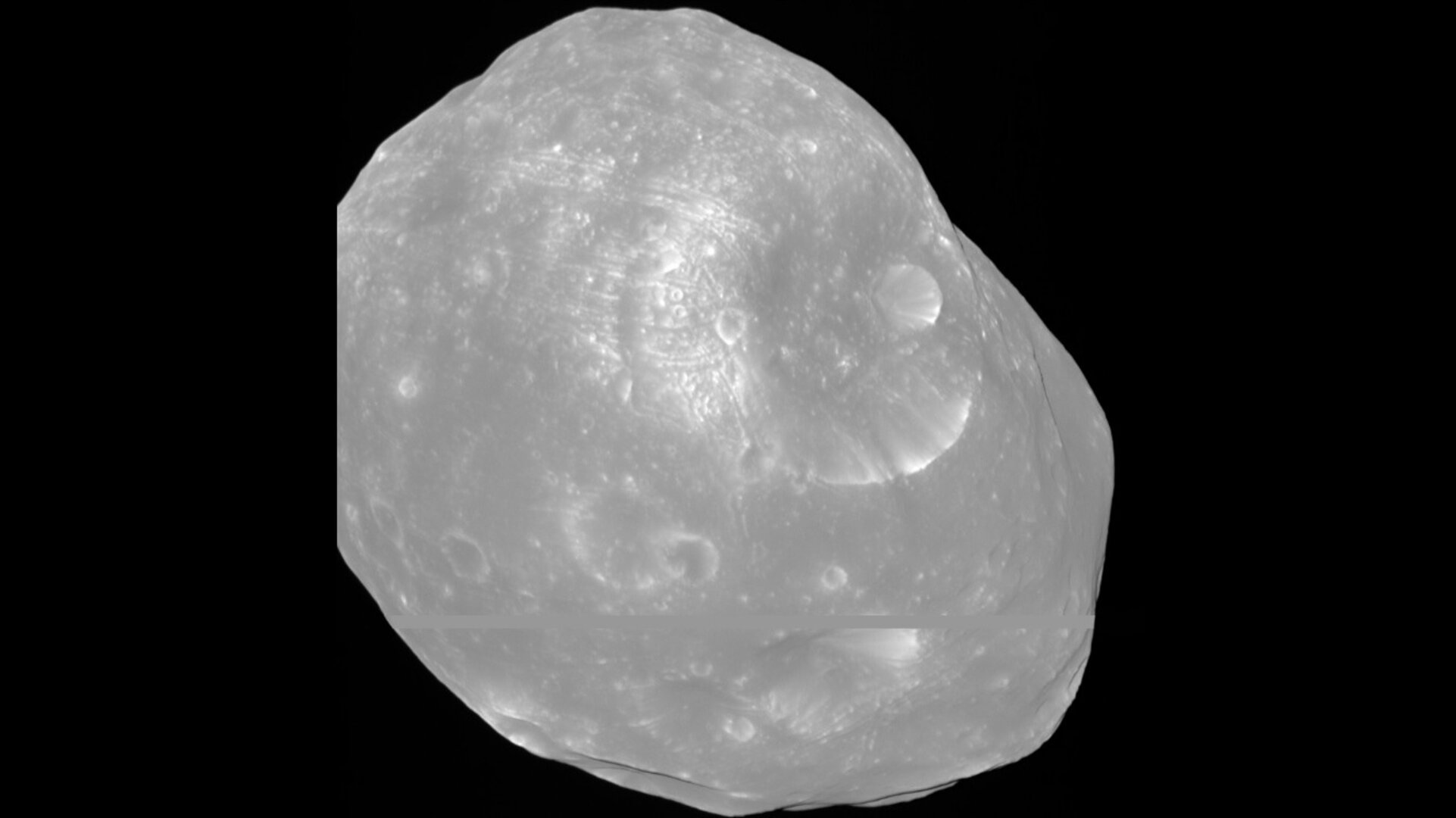 ESA’s Mars Express has captured detailed views of the small, scarred and irregularly shaped moon Phobos from different angles during a unique flyby.

Mars has two moons: Phobos and the smaller and more distant Deimos, named after the Greek mythological personifications of fear (Phobos – hence ‘phobia’) and terror (Deimos).

Mars Express has explored this duo since it began observing the Red Planet in 2004: it has viewed Phobos with the beautiful rings of Saturn in the background, skimmed past the moon at a distance of just 45 km, used its High Resolution Stereo Camera to take incredibly detailed 360-degree images of Phobos and its intriguingly marked surface, and approached Deimos to produce an array of images and pin down the moon's location and motions.

A new image sequence from Mars Express now captures Phobos’ motions and surface in detail. The movie comprises 41 images taken on 17 November 2019, when Phobos passed Mars Express at a distance of 2400 km. Mars Express is currently the only spacecraft capable of close encounters with Phobos.

This opportunity allowed the spacecraft to view myriad features across the moon’s surface. A number of impact craters can be seen, created as the 26 km-long Phobos was hit by small bodies and rocky debris during its travels through space. The largest of these is Stickney crater, which can be seen towards the centre of the frame and measures 10 km across.

Also visible are a number of linear marks and furrows that resemble long, deep grooves or scratches. The origin of these features is uncertain: they may have been carved out by debris rolling across the moon’s surface, or created as the moon was pulled in different directions by tidal forces driven by its parent planet.

The image sequence shows Phobos at a number of angles – the moon can be seen rotating, and slowly lightens up before it begins to darken again. The slight up-and-down motion of the moon is caused by the slight oscillation of Mars Express, as the spacecraft has rotated from its normal position (pointing towards Mars) to this new one (pointing towards Phobos) in order to acquire these images. 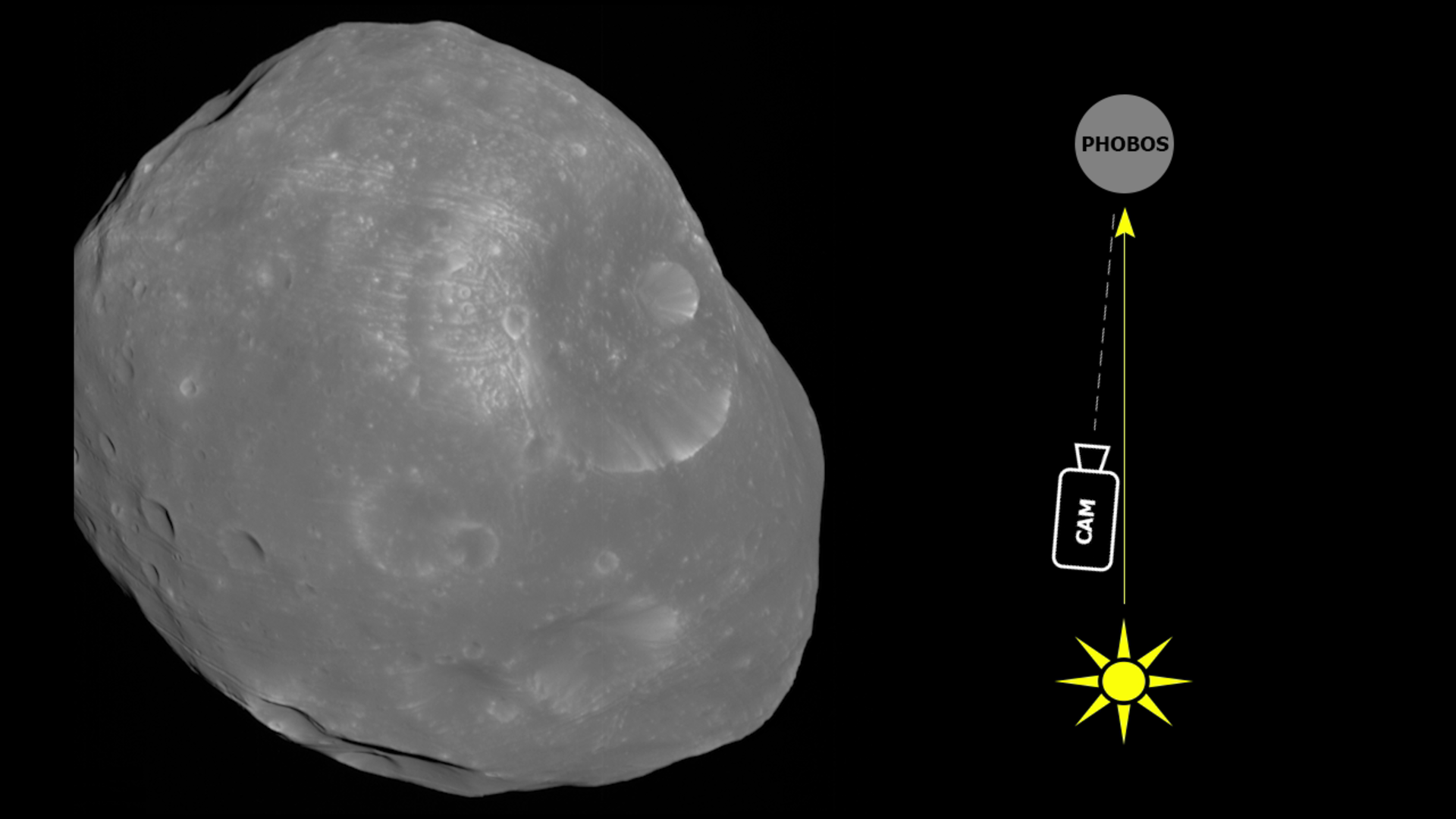 These data nicely illustrate the concept of ‘phase angle’: the angle between a light source (in this case, the Sun) and the observer (Mars Express), as viewed from the target object itself (Phobos). The initial phase angle is 17 degrees, drops to almost 0 degrees mid-way through (when Phobos is at its brightest), and then rises to 15 degrees by the end of the animation.

To gain a mental image of this trajectory, one can imagine Mars Express observing Phobos from one side, slowly moving across to draw level with it, and then moving away to the other side, drawing an arc in the sky between Phobos and the Sun.

Images acquired across a range of phase angles, as shown here, are incredibly useful for scientists. Different shadows are cast as the Sun’s position changes relative to the target object: this illuminates and highlights the surface features and enables calculations of feature height, depth and relief, and reveals much about the roughness, porosity and reflectivity of the surface material itself.

A phase angle of zero degrees occurs when the Sun is directly behind the observer. In this alignment, all of the light illuminating Phobos hits the surface vertically and is thus largely reflected back into space, causing the target object to brighten up noticeably, as seen in the animation, and shadows to disappear. The lowest phase angle in this animation is not precisely zero, but 0.92 degrees.

As such, Mars Express takes every opportunity to view this small and intriguing moon from this angle, to shed light on its properties, behaviour, possible origin, orbital characteristics and location in space – and to probe its potential as a mission destination.

Phobos may be an unfamiliar world, but the phenomenon shown in the movie is familiar to anyone who has seen a full Moon. To create a full Moon, the Sun, Earth and Moon align in a roughly straight line (although, due to orbital inclinations, an exact line-up is rare, and results in a lunar eclipse). Here the phase angle – the angle between the light source (the Sun) and observer on the surface of the Earth, as viewed from the Moon – is zero, just as in the movie of Phobos. Today, 12 December, marks the last full Moon of 2019. So look up, and think of Mars’ tiny moon Phobos!