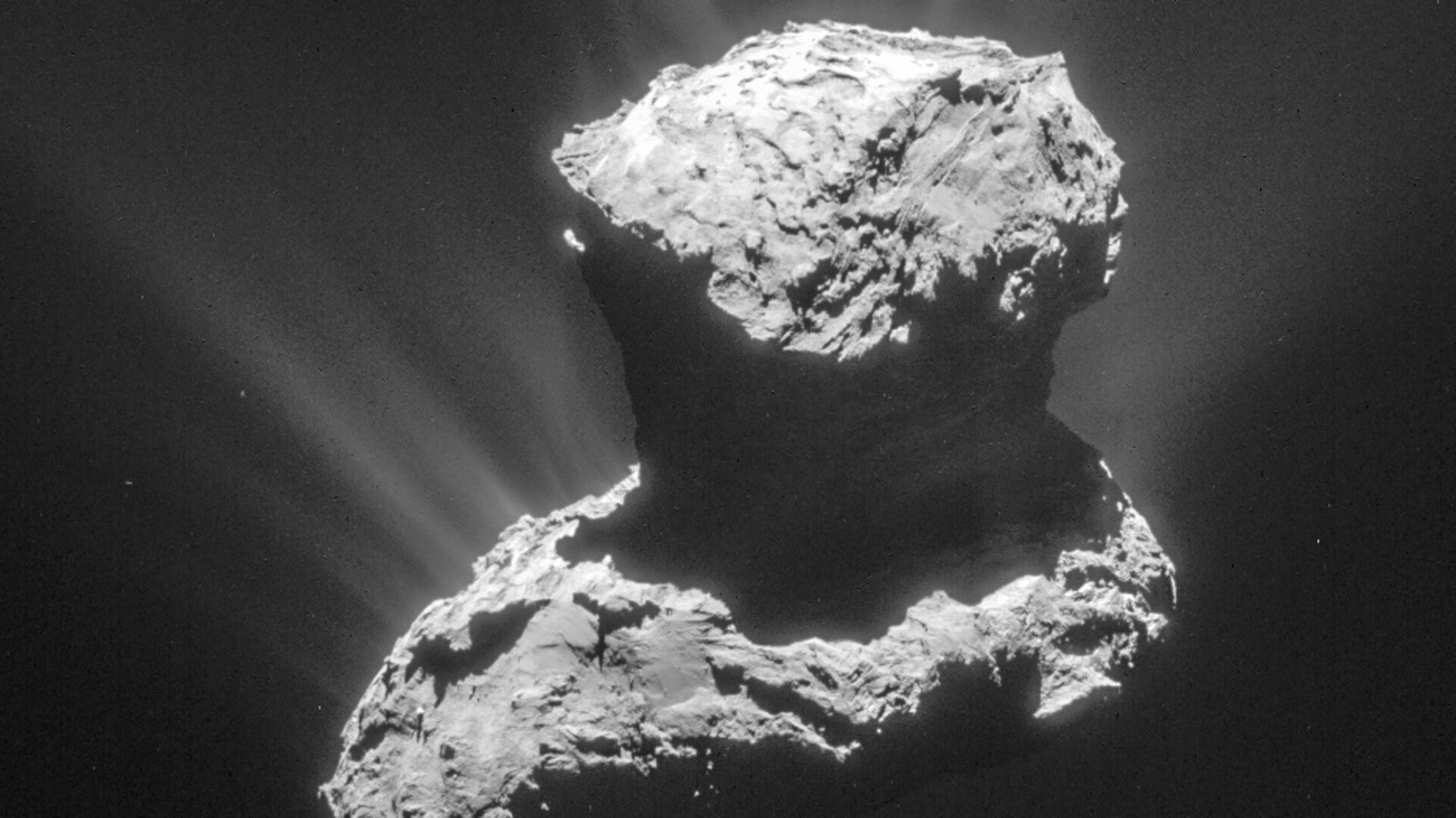 Ingredients regarded as crucial for the origin of life on Earth have been discovered at the comet that ESA’s Rosetta spacecraft has been probing for almost two years.

They include the amino acid glycine, which is commonly found in proteins, and phosphorus, a key component of DNA and cell membranes.

Scientists have long debated the important possibility that water and organic molecules were brought by asteroids and comets to the young Earth after it cooled following its formation, providing some of the key building blocks for the emergence of life.

While some comets and asteroids are already known to have water with a composition like that of Earth’s oceans, Rosetta found a significant difference at its comet – fuelling the debate on their role in the origin of Earth’s water.

But new results reveal that comets nevertheless had the potential to deliver ingredients critical to establish life as we know it.

Hints of the simplest amino acid, glycine, were found in samples returned to Earth in 2006 from Comet Wild-2 by NASA’s Stardust mission. However, possible terrestrial contamination of the dust samples made the analysis extremely difficult.

Now, Rosetta has made direct, repeated detections of glycine in the fuzzy atmosphere or ‘coma’ of its comet.

“This is the first unambiguous detection of glycine at a comet,” says Kathrin Altwegg, principal investigator of the ROSINA instrument that made the measurements, and lead author of the paper published in Science Advances today.

“At the same time, we also detected certain other organic molecules that can be precursors to glycine, hinting at the possible ways in which it may have formed.”

The measurements were made before the comet reached its closest point to the Sun – perihelion – in August 2015 in its 6.5 year orbit.

The first detection was made in October 2014 while Rosetta was just 10 km from the comet. The next occasion was during a flyby in March 2015, when it was 30–15 km from the nucleus.

Glycine was also seen on other occasions associated with outbursts from the comet in the month leading up to perihelion, when Rosetta was more than 200 km from the nucleus but surrounded by a lot of dust.

“We see a strong link between glycine and dust, suggesting that it is probably released perhaps with other volatiles from the icy mantles of the dust grains once they have warmed up in the coma,” says Kathrin.

Glycine turns into gas only when it reaches temperatures just below 150°C, meaning that usually little is released from the comet’s surface or subsurface because of the low temperatures. This accounts for the fact that Rosetta does not always detect it.

“Glycine is the only amino acid that is known to be able to form without liquid water, and the fact we see it with the precursor molecules and dust suggests it is formed within interstellar icy dust grains or by the ultraviolet irradiation of ice, before becoming bound up and conserved in the comet for billions of years,” adds Kathrin.

Another exciting detection made by Rosetta and described in the paper is of phosphorus, a key element in all known living organisms. For example, it is found in the structural framework of DNA and in cell membranes, and it is used in transporting chemical energy within cells for metabolism.

“There is still a lot of uncertainty regarding the chemistry on early Earth and there is of course a huge evolutionary gap to fill between the delivery of these ingredients via cometary impacts and life taking hold,” says co-author Hervé Cottin.

“But the important point is that comets have not really changed in 4.5 billion years: they grant us direct access to some of the ingredients that likely ended up in the prebiotic soup that eventually resulted in the origin of life on Earth.”

“The multitude of organic molecules already identified by Rosetta, now joined by the exciting confirmation of fundamental ingredients like glycine and phosphorous, confirms our idea that comets have the potential to deliver key molecules for prebiotic chemistry,” says Matt Taylor, ESA’s Rosetta project scientist.

“Demonstrating that comets are reservoirs of primitive material in the Solar System and vessels that could have transported these vital ingredients to Earth, is one of the key goals of the Rosetta mission, and we are delighted with this result.”

“Prebiotic chemicals – amino acid and phosphorus – in the coma of comet 67P/Churyumov–Gerasimenko”, by K. Altwegg et al is published in the journal Science Advances.